GBP/JPY: on the verge of another major breakout?

The pound has been given another shot in the arm this morning by a surprisingly strong UK retail sales number. Sales rose by a good 1.2% in April following a 0.5% decline the month before, easily topping expectations for a 0.4% increase. This comes just two days after it was confirmed that in the same month the UK economy fell into deflation for the first time since 1960. As a result, the pound has made back its entire losses since Tuesday against the US dollar. The pound’s strength is even more apparent against currencies where the central bank is more dovish that the Fed, such as the euro and yen. Against the euro, the pound has rallied to its best level since mid-March and the EUR/GBP appears poised to make a run at that elusive 0.70 handle after all. Against the yen, sterling is testing the 6.5-year high at 189.70 that was last hit in December of last year. Indeed, it is the GBP/JPY cross that we are feeling rather bullish on because the USD/JPY also appears to be finally breaking higher, even if it is a touch lower today on the back of some stronger Japanese manufacturing PMI that was released overnight.

The GBP/JPY is continuing to rise after it formed a major reversal pattern (a double bottom/false breakdown) in mid-April around 175.50, a price level which we had covered in our report on April 13. We last updated our GBP/JPY outlook on May 11 in our aptly-titled report “GBP/JPY: on the verge of a major breakout?” in which we said among other things that the GBP/JPY “may have paved the way for a move to much higher levels…” after clearing the then key resistance level of 185.00. At the time of this writing, the cross is hovering around the December peak of 189.70, which was also the highest level since September 2008. A decisive closing break above this level may thus give way to further follow-up technical buying which could pave the way for further sharp gains in the near-term.

As there is not much prior price reference points to watch on the GBP/JPY, this is where Fibonacci extension levels come handy. On the chart, below, we have plotted the extension levels of the past price swings from point A to B and from C to D. The first immediate Fibonacci target is thus at just shy of 191.30 which corresponds with the 161.8% extension of the CD swing. The more significant extension levels are further out at 193.55 and then 198.45 i.e. these are the 127.2 and 161.8 per cent extension levels of the AB swing. Fibonacci extension levels are used by some traders as objective profit targets. So, the rally could potentially fade around these levels as the longs take profit. In between the Fibonacci levels is the projected target of the double bottom pattern around 194.50. This is derived from adding the height of the pattern (i.e. 950 pips – the distance between point C and D) to the neckline at 185.00.

Meanwhile a potentially bearish scenario would be if we get a false breakout above 189.70. If price fails to hold above here on a closing basis and as a result a bearish-looking candle is formed, such as a shooting star, then it may pull back towards supports at 188.65, 186.00 or even 185.00 before deciding on its next move. Though this scenario looks unlikely given the bullish fundamental backdrop (BoJ more dovish than BoE) and the manner in which price has moved higher (i.e. steadily as opposed to a sharp move), the rally does look a little bit over-stretched nonetheless.  Indeed, the RSI is now at overbought level of above 70. However one can argue that this indicator is merely highlighting what we already know, which is that the bullish momentum has been strong. It is not too unusual if the RSI remains overbought for extended periods of time. 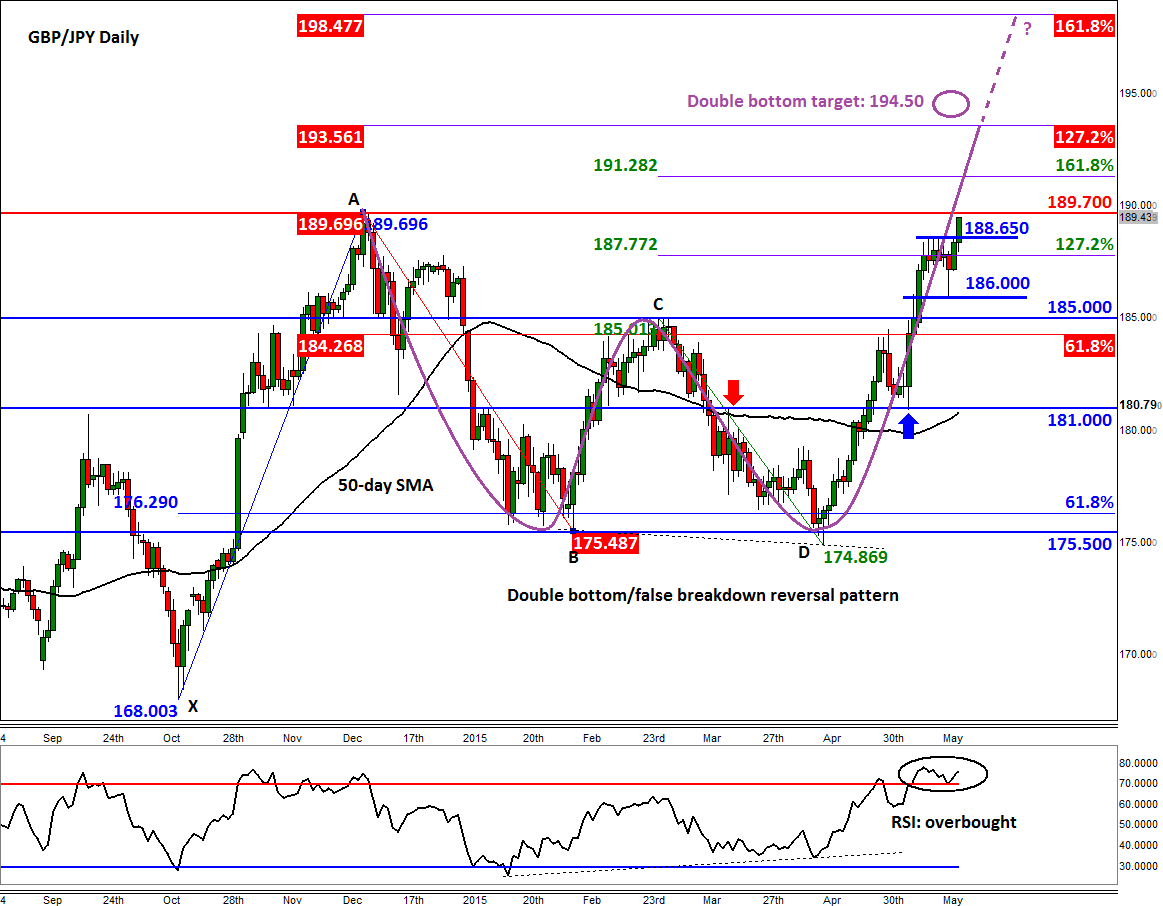