The never-ending parade of economic data releases continued this morning, with the main event (thus far at least) coming from Europe. In the Eurozone, Flash PMI figures came out mixed, with the Manufacturing report coming in better than expected at 52.3 vs. 51.8, though the Services report was weaker than anticipated at 53.3 vs. 53.9 eyed. Overall, these reports continue to show positive, but painfully slow growth in the Eurozone economy.

Meanwhile in the UK, April’s Retail Sales was stellar, showing a 1.2% m/m reading vs. just 0.4% growth expected. Analysts chalked up the strong performance to summer shopping amidst April’s warm weather, with sales of clothing, footwear, and textiles rising by 5.2% in the month. Given the proximity of their releases (and their geographical proximity), it’s hard not to directly contrast the continued solid performance of the UK economy against the tepid growth in the Eurozone and by extension, the outlook for the EURGBP currency pair.

From a technical perspective, we’ve been bearish on EURGBP ever since its failed breakout above resistance at its 38.2% Fibonacci retracement and 100-day MA early this month. The ill-fated rally above this barrier was quickly reversed and rates collapsed all the way down to key previous support at .7120 last week. After a brief bounce last week, EURGBP bears have taken the upper hand once again and the pair is now peeking out to a fresh 2-month low under .7100 on the back of today’s retail sales report. The secondary indicators bolster the bearish case, with the MACD trending lower beneath its signal line and the “0” level, while the RSI has rolled over and is still far from oversold territory. For more analysis on the pound’s big rally, see my colleague Fawad Razaqzada’s report from earlier today, “GBP/JPY: on the verge of another major breakout?”

So where is EURGBP headed next? While it’s impossible to know for certain, the bearish economic divergence and major breakdown below .7120 support points toward more weakness in the short term. As long as rates remain below previous-support-turned-resistance at .7120, the next major support zone to watch will be the convergence of the psychologically significant .7000 level and the 7.5-year low at .7010. Below there, a move toward .6900 or lower could even be in play. 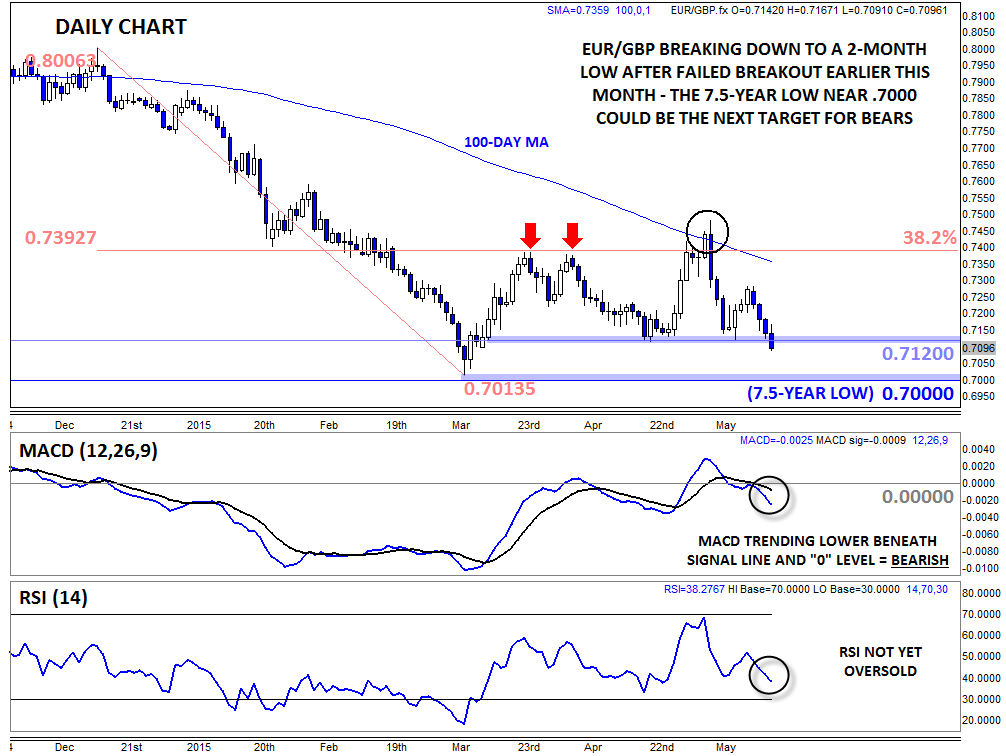