IBEX bounces back after election-inspired sell-off

Following a long holiday weekend, European stocks started the day on the back foot before bouncing off their worst levels as we approached midsession. US index futures also point to a slightly weaker start on Wall Street. The main reason behind the earlier risk off tone was yet again concerns over Greece and its ability – or lack thereof – to repay loans totalling €1.6 billion to the IMF in June, starting with a €300 million payment on June 5. But as the session wore on, these concerns eased a little and European equities correspondingly bounced off their lows while the markets in Greece, which had sold off on Monday, traded in the positive territory as banks advanced. This comes after PM Tsipras, who won the backing from his Syriza party to conclude a bailout deal, said his country would accept a workable deal over economic reforms needed to unlock the bailout funds. Whether Greece will be able to make its repayments next month remains to be seen, but it looks like the situation there may have inspired the rise of anti-austerity political parties in some struggling European countries. In Spain, for example, the ruling Popular Party suffered heavy losses at the weekend's regional and local elections.  This saw the anti-austerity Podemos party make a significant advance. As a result, shares in Madrid – where the markets were open on Monday – have suffered heavy losses at the start of this week.

But are the stock market investors overreacting to all this noise coming from Greece? After all, the Eurogroup is unlikely to let all their hard work go to waste and allow the struggling country to default and leave the euro zone. What’s more, the ECB’s on-going bond buying programme is likely to keep government bond yields near their historic lows for the foreseeable future, driving yield-seeking investors into riskier assets such as equities. The euro is also likely to remain depressed for the same reason, which should help exports become more competitive. On top of this, the Fed has suggested that a rate hike would be appropriate later this year; this should help to keep the EUR/USD under further pressure and boost the appeal of the euro zone exporters.

As mentioned, European indices, including the Ibex, have bounced off their lows. The bears on the Spanish benchmark were unable to hold their ground below the resistance-turned-support level of 11200 for a significant amount of time this morning, leading to a short-covering bounce. It found additional support from the 61.8% Fibonacci level of the last upswing (from point E to F). However there is still a long way to go until the end of today’s session, so things could change once again later this afternoon. If the Ibex finishes the day below this 11200 level then we may see a more profound correction as the week wears on.  In this scenario, the index may head towards the low of 10925 hit earlier in the month or even 10740/50 before making its next move. The latter is a resistance area where the 200-day moving average converges with the 50% retracement level of the last notable upswing from point C and the 127.2% Fibonacci extension of the EF swing. Alternatively, a decisive close above 11200 would keep the bullish momentum intact.  A particularly bullish outcome would be if the Ibex goes on to take out the most recent high at 11610 (point F) on a closing basis. If seen, this could pave the way for much higher levels in the coming weeks. 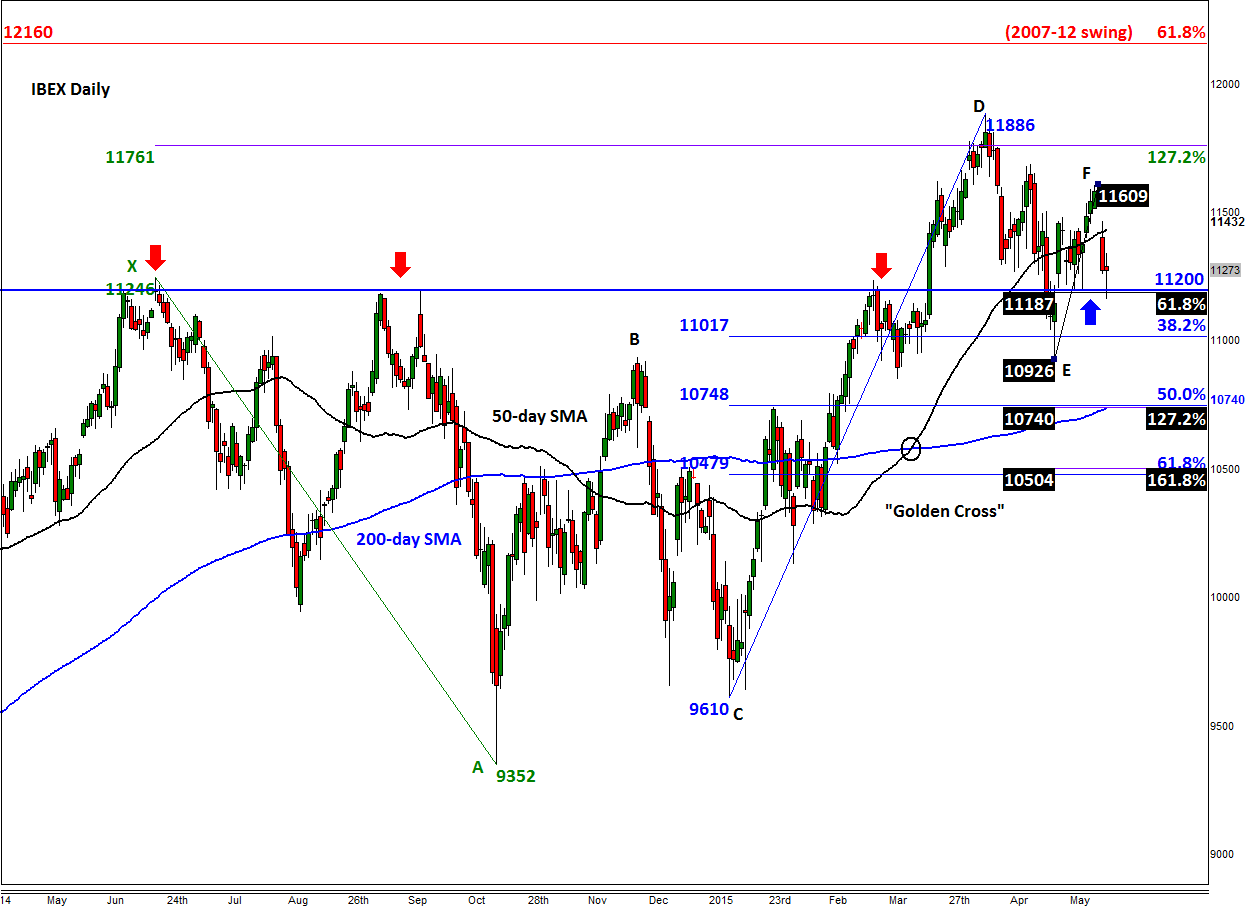