Gold has been absolutely battered today. It has already shed some $20 from its opening price and as we go to press it is still hovering near the day’s lows. The considerably stronger dollar is chiefly responsible for this latest slide in the price of gold and other buck-denominated commodities. The greenback has found renewed strength in recent days thanks to a combination of stronger US data and a hawkish tone from the Federal Reserve. Several Fed members including Chairwoman Janet Yellen have talked up the possibility of raising rates later this year, possibly at the FOMC’s September meeting. Although they have acknowledged the soft patch in first quarter US data, most of the Fed officials think transitory factors such as the weather were to blame and thus foresee the return of brighter macroeconomic numbers later in the year. Their worry is that if the Fed does not act early enough then inflation may be overcooked. They argue that the potential cost of this strategy is probably less than that of waiting too long, which would require an aggressive rate hiking cycle.  The sharper-than-expected rise in core CPI inflation we saw on Friday certainly argues the case for an earlier rate rise. The economic numbers released today, if not speculator, were also mostly better than expected including new homes sales and consumer confidence. If US data starts surprising to the upside now then we could certainly see further weakness in gold.

Intriguingly, gold has failed to find much if any demand from safe haven buying either today despite the sharp drop in European and US equity markets. This, we think, argues against a sharp recovery now. Indeed, gold’s sell-off could accelerate if it goes on to break the technically-important level of $1185 in one of these upcoming sessions. As can be seen on the chart, this level corresponds with a short-term bullish trend line. Should the bears manage to push the price of gold below this mark then this could give rise to further follow-up technical selling.  Consequently, gold could easily drop to $1177, the 61.8% Fibonacci retracement of its up move from the March low, before making its next move.  Further support is seen at $1170, the low from earlier this month, followed by the long-term 61.8% Fibonacci retracement at just below $1155. Meanwhile on the upside, the prior support are around $1200/3 needs to be watched closely as this could now turn into resistance upon re-test. 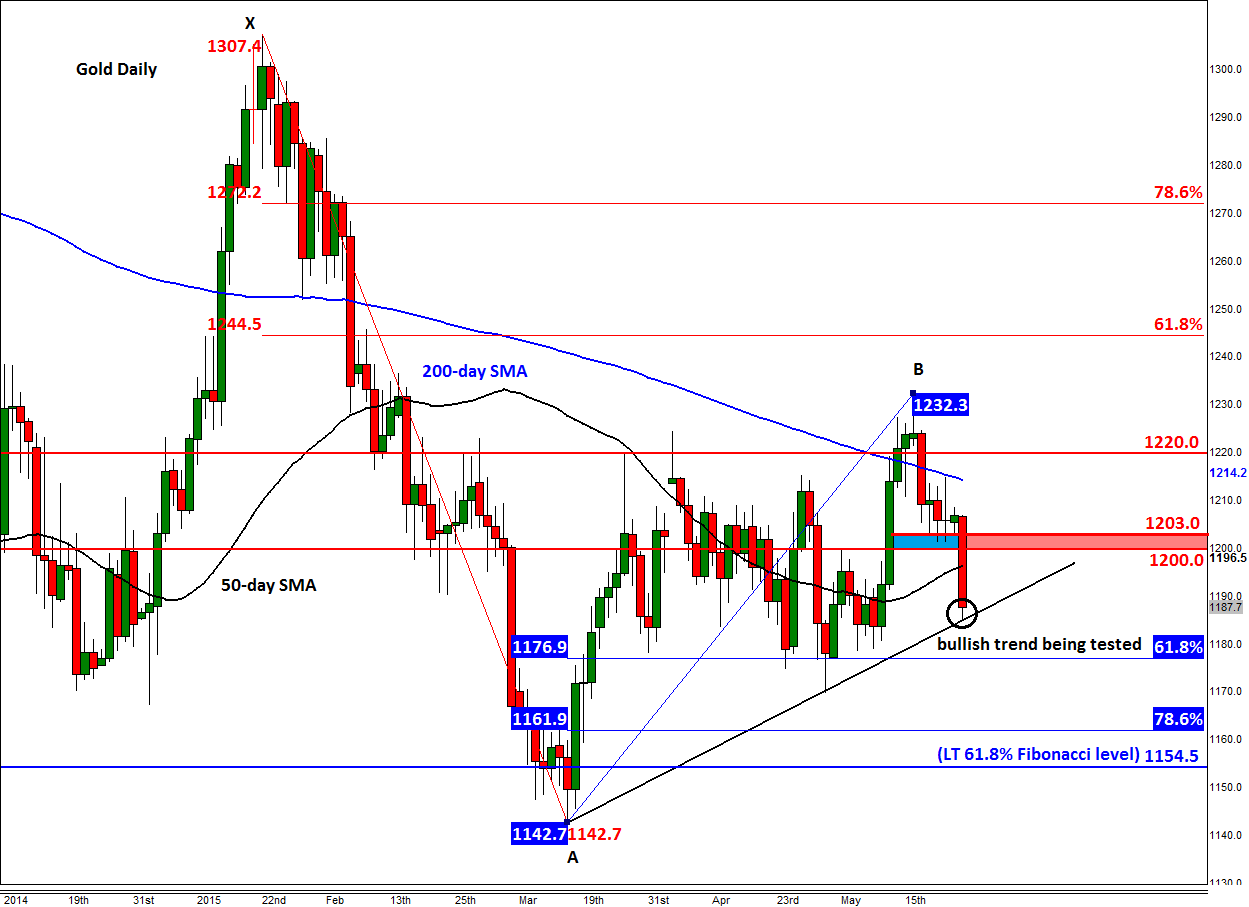