Last week, we discussed 3 technical reasons that EURUSD support at 1.1050 support could give way, but even we were caught off guard by the ferocity of the selloff over the last week. The world’s most widely-traded currency pair started last week all the way up at 1.1450, but in less than a week and a half, EURUSD has shed nearly 600 pips to trade all the way down at 1.0870 as of writing.

Fundamentally speaking, the big drop is not attributable to any single catalyst; rather, a series of factors are conspiring to drive the euro lower and the dollar higher. On the east side of the Atlantic, the euro has come under pressure amidst escalating fears that Greece will not be able to secure another bailout ahead of next week’s big debt payment date to the IMF. The struggling Mediterranean country will meet with its creditors later today and tomorrow, but expectations for an imminent deal are low. Earlier today, European Commission President Jean-Claude Juncker accused Greek Finance Minister Yanis Varoufakis of obstructing the negotiations, stating “He is not helping the process. Mr Varoufakis is the finance minister of a country that has to confront huge problems and he doesn’t give the feeling that he knows that.” Of course, traders have been along for this ride before, with Greece and its creditors always reaching a last-minute deal allowing them to kick the can down the road for a few months, but as long as the cloud of uncertainty surrounds the region, the euro will struggle to rally.

On the other side of the Atlantic, tepid signs of a spring thaw in US economic activity and signs that the Fed are still planning on raising interest rates this year have helped the buck regain its mojo. Today’s Durable Goods Orders were ho-hum, but the New Home Sales report showed continued strength in the housing sector while Friday’s Core CPI reading was the strongest in over two years. Meanwhile, both Fed Chair Janet Yellen and Vice Chair Stanley Fischer have publicly stated that they expect the Fed to raise interest rates at some point this year. While a June rate hike is almost certainly off the table, September remains in play, especially if Core PCE (the Fed’s preferred inflation measure) starts to mimic the recent strength in CPI.

The strong selloff in EURUSD since the start of last week suggests that the long-term downtrend may be resuming after a sub-50% retracement in April and early May. Friday’s big Bearish Engulfing Candle*, along with the break back below key previous-resistance-turned-support at 1.1050, set the bearish tone heading into this week, and with rates peeking below the 61.8% Fibonacci retracement of the previous rally, more downside is possible this week. As for the secondary indicators, the MACD is about to cross below its “0” level, signaling a shift to outright bearish momentum, though the oversold Slow Stochastics hint at a pause or near-term bounce over the next few days.

Bringing all of the above together, it would not be surprising to see some near-term consolidation or a brief counter-trend rally in EURUSD this week, but as long as the pair remains below the 1.1000-50 zone and Greece’s debt situation remains unresolved, traders will continue to sell first and ask questions later. 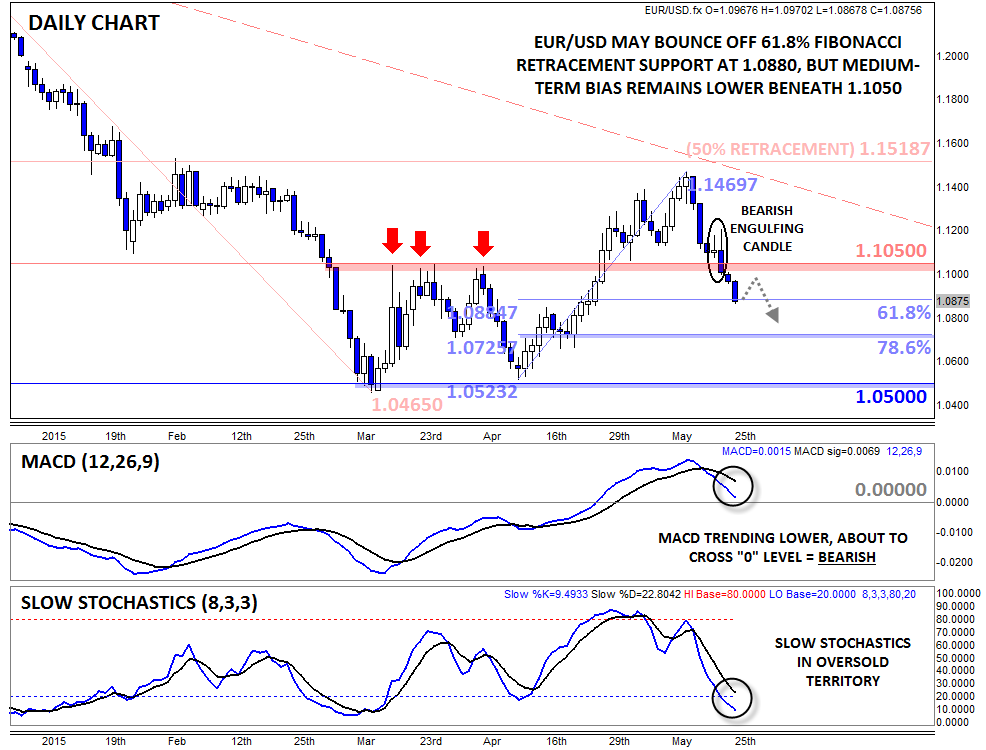