As my colleague Fawad Razaqzada noted earlier today, oil is testing some key support levels around 58.00 (for WTI) and 63.00 (for Brent) ahead of tomorrow’s always-critical EIA oil inventories report. The recent weakness in oil prices has spilled over (no pun intended) into the forex market, where the oil-dependent Canadian dollar, Norwegian krone, and Russian ruble are all falling against the US dollar.

With an uneventful Bank of Canada meeting now behind us, USDCAD in particular may trade on its technical developments. The pair has seen a major break back above the 1.2400, which provided significant support on at least seven separate days in Q1 before finally giving way in mid-April. The combination of yesterday’s break back above this key previous-support-turned-resistance level and the two-week bullish channel off support in the mid-1.19s signals that buyers have regained the upper hand.

This bullish outlook is confirmed by the 4hr MACD indicator, which is trending consistently higher above its signal line and the “0” level, and the RSI, which is holding in “overbought” territory. While in overbought reading in an oscillator can serve as a near-term headwind, it’s important to remember that, by definition, it takes a strongly trending market to create an overbought reading in the first place.

Therefore, a near-term dip back to 1.2400 is certainly in play heading into the end of this week, but as long as buyers step in to defend that level and the bottom of the channel near 1.2350, the bulls will remain in control. Beyond the psychologically significant 1.2500 barrier, the next resistance level to watch will be the convergence of early April high and 78.6% Fibonacci retracement at 1.2650; this level could easily come into play around some of next week’s major economic reports from both sides of the 49th parallel. 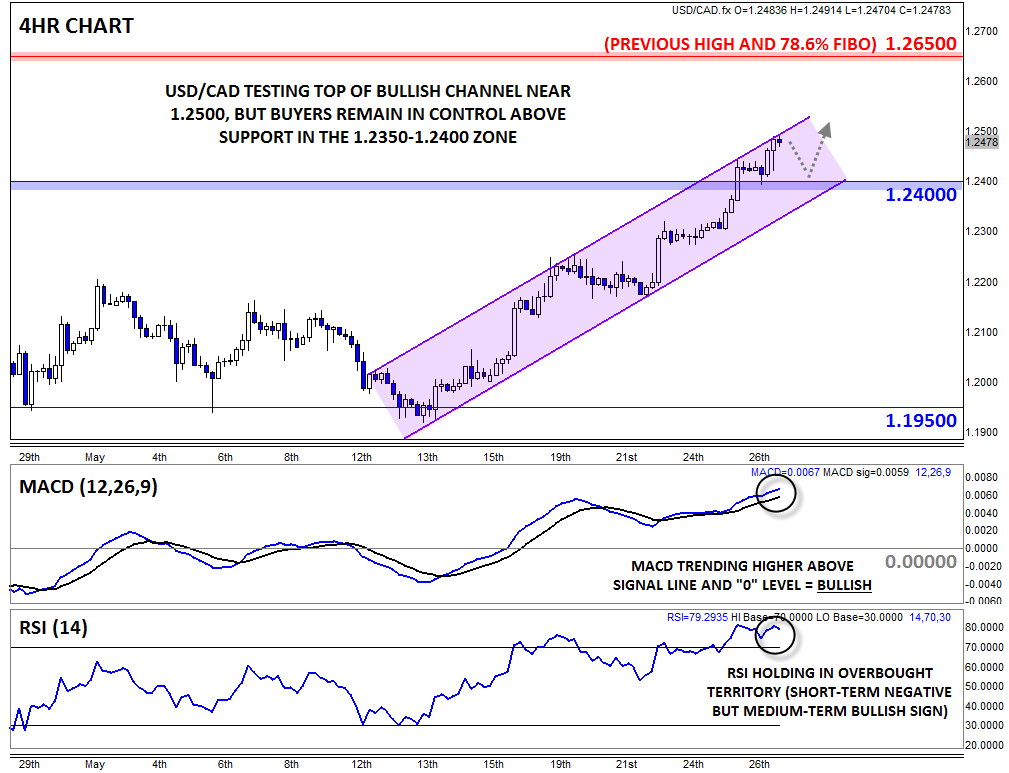