Stocks: why the FTSE 100 could be a lead indicator

There has been much market speculation of late that the global stock market rally could be running out of steam and stocks may be about to head lower. In fairness, stocks have had a fantastic run; the S&P has been in an uptrend since 2009 and has made record highs. Likewise, the Dax and the FTSE 100 have also reached fresh record territory in recent months, so is it time the markets turned lower?

Below we take a look at the S&P 500, the German Dax and the FTSE 100 including their A/D lines, to see if we can find out anything about the strength of their current trends. 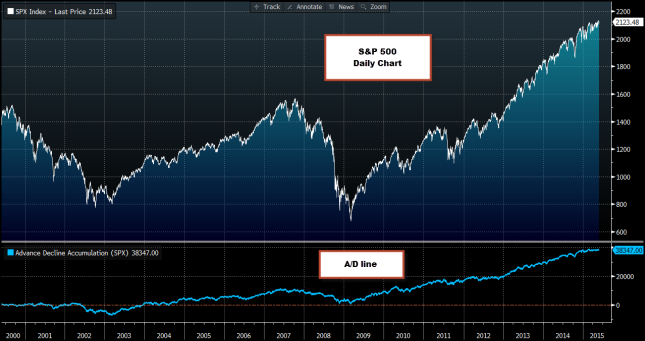 As you can see, the S&P 500 and the A/D line have mostly been moving in the same direction, however, the A/D line has started to level out in recent sessions. This is worth noting as it suggests that the market could be about to embark on a period of consolidation. We don’t know how the market will react after a period of horizontal movement – will it continue in its uptrend, or will it turn lower? Due to this, we will be watching the A/D line closely in the coming days and weeks, and if it starts to turn lower then the S&P 500’s price action could follow suit. 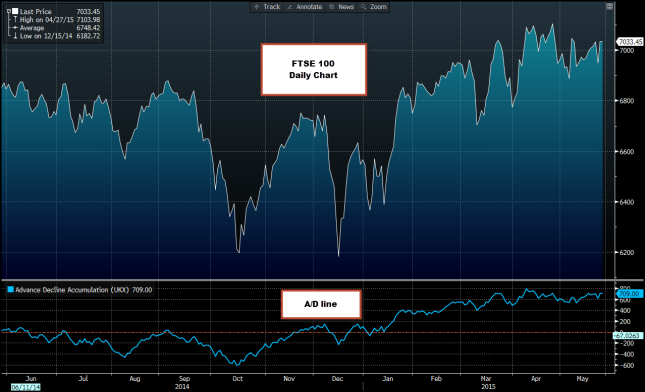 Similar to the S&P 500, the FTSE 100’s A/D line has also levelled off. The difference here is that it peaked in April, at the same time as the FTSE 100 made a record high. This suggests a couple of things: 1, the FTSE 100 may have already peaked on 27th April at 7,103, 2, the period of consolidation has already begun for the FTSE 100, 3, the next big move for the FTSE 100 could happen sooner than it does for the S&P 500. If the A/D line turns south anytime soon, FTSE 100 traders should have their hard hats at the ready. 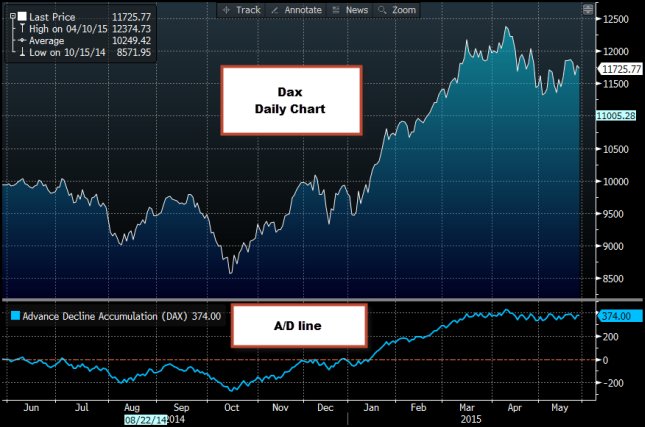 As with the S&P 500 and the FTSE 100, the Dax’s A/D line also suggests that the index is in a period of consolidation. It has been moving sideways since March, but the range of its A/D line is smaller than the range of the FTSE 100’s A/D line, suggesting that this index is happy to stay at a relatively high level for now. Whenever the A/D line moves sideways it is always worth watching it closely to see if it heads south, suggesting a change in trend could be imminent. For now, the A/D line supports the Dax remaining in its current range.

Overall, market Sentiment remains fairly strong, but it has lost its oomph of late which suggests that a prolonged period of consolidation could be on the cards during the summer months.