The dollar is king for May, but can it last?

As we end May in a rather rainy and blustery fashion here in London, the dollar is having a bad end to the trading month. The latest economic data hasn’t helped things; the US economy shrank 0.7% in the first quarter.  Although this was less than the -0.9% decline expected, it suggests that the US economy is still under the first-quarter weather-related curse that we saw last year.

The immediate rush to safe havens saw Treasury yields fall and the dollar to back away from recent highs, however, not even this data is enough to dislodge the dollar’s pole position in the G10 FX space for this month.

As you can see below, the dollar managed to outpace all of its G10 peers, with NZD suffering the most, dropping some 5.56% to a five-year low vs. the USD, while the JPY fell more than 3%, sending USDJPY to its highest level for 12 years. The pound managed to eke out a gain vs. the USD this month, highlighting how powerful a win for the Conservatives was for sterling.

But, after such a strong performance it is natural to see a bit of dollar short-covering as we move into June, this has been exacerbated by the US GDP data. However, we continue to think that the USD may continue to strengthen for a few reasons:

How to trade the USD:

We think that EURUSD could prove tricky in the next few days/ weeks, as a “kicking the can down the road” solution to the Greek problem, thus averting imminent bankruptcy, could trigger a relief rally in the single currency.

As you should be able to see in figure 1, dollar strength seems fairly well entrenched and may continue into June. We believe the buck has the potential for further gains vs. the NZD (where the 2010 low at 0.6560 is now key support), and the JPY (where the next key level of resistance for USDJPY is 136.50 – the high from 2002). The pound also looks fragile, especially in light of a potential austerity-led slowdown in growth for the next few years, 1.5155 – a cluster of daily smas could act as key support next week. 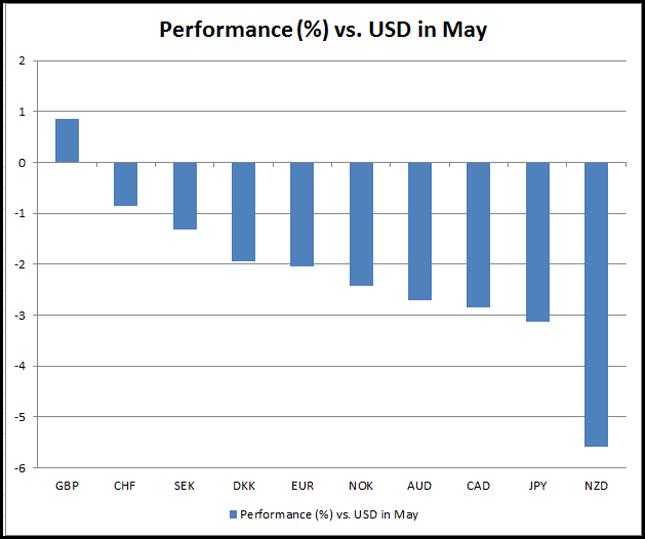