RBA Preview: this is a crucial week for the AUD

The Reserve Bank of Australia is widely expected to leave the official cash rate at 2.00% at its policy meeting on Tuesday, with all 28 economists surveyed by Bloomberg predicting the bank to remain on hold and the OIS market is only pricing in around a 15% chance of a 25 basis point rate cut tomorrow, despite last week’s soft private capital expenditure data out of Australia.

The RBA cut interest rates at its last meeting in May, but it gave no real indication that it is preparing to loosen monetary policy further in the near-term. In fact, the bank pretty much removed its easing bias at that meeting, before clarifying later that a lack of guidance shouldn’t be considered an indication that it’s ruling out the possibility of another rate cut. Also, in its latest quarterly Monetary Policy Statement (MPS) the RBA downgraded its inflation and growth forecasts for 2015/2016, after already downgrading them in February. It cut its June 2016 core inflation estimate to 1.75%-2.75% vs. 2%-3% in February. It also dropped its 2015-2016 growth estimate to 2%-3% from 2.5%-3.5%. At the same time it said that the economy would grow at a below average pace for longer than earlier anticipated and that the unemployment rate will peak slightly later than previously expected (6.5% in mid-2016).

The downgrade to Australia’s inflation and growth outlooks was followed later in May by much softer than expected capital expenditure figures from the private sector. Total CAPEX decreased 4.4% in Q1, even worse than the market’s expectations for a 2.2% fall. Also, estimate 2 for 2015-2016 came in 24.6% lower than the same estimate for 2014-2015, with the estimate from miners falling 34.9% over the same period. In fact, the report was weak enough for some market forecasters to suggest that Australia’s CAPEX outlook is now at recessionary levels - total private capital expenditure in 2015-2016 is now predicted to be 104,033m, although we are expecting this to rise in future estimates.

The RBA, and the market for that matter, needs to see more signs of life in non-resource parts of the economy to help pick-up the slack from diminishing mining investment. However, businesses are unlikely to ramp-up spending plans or increase wages without an increase in confidence, both from consumers and other corporates. As long as confidence remains depressed, spending and wage growth are likely to remain subdued, which limits the growth potential of the broader economy. In brief, without activity at the ground the ground level, non-resource parts of the economy are going to struggle.

So, why aren’t we expecting the RBA to loosen monetary policy anytime soon?

The RBA isn’t expected to loosen monetary policy any further this time around because it wants to assess the impact that prior easing is having on the economy before moving interest rates in either direction, and it’s also concerned about a ballooning property bubble in Sydney and it has admitted that further cuts at this end of the policy spectrum, and while confidence remains depressed, have a reduced positive impact on the economy. Overall, the policy calculator states that the combination of some minor signs of life in the domestic economy, the threat of distending property prices in Sydney, a weaker exchange rate and the easing yet to find its way into the real economy offset the diminished positive impact that further policy loosening would have on distressed parts of the broader economy.

With the vast majority of the market expecting the bank to remain on hold this time around, the focus will be on RBA Governor Stevens’ accompanying statement. Stevens isn’t expected to rock the boat and should maintain a mild dovish bias as the board assesses the impact of prior policy loosening. We expect the bank to reiterate that the Australian dollar remains high, despite recent weakness in the commodity currency, but it may indicate that it’s approaching more disable levels for economic expansion, especially given a recovery in iron ore prices last month.

The reaction of the Australian dollar to the policy meeting greatly depends on Stevens’ tone. With the market not really expecting much from the bank this month or next month, a more dovish tone this time around, underpinned by the soft CAPEX data, may result in a push away from AUD as the market brings forward its loosening timetable. Although, our base case is that the RBA maintains the status quo, as it may want to keep its options open given Australia’s uncertain economic outlook, which could lead to a short-term relief rally in AUD. 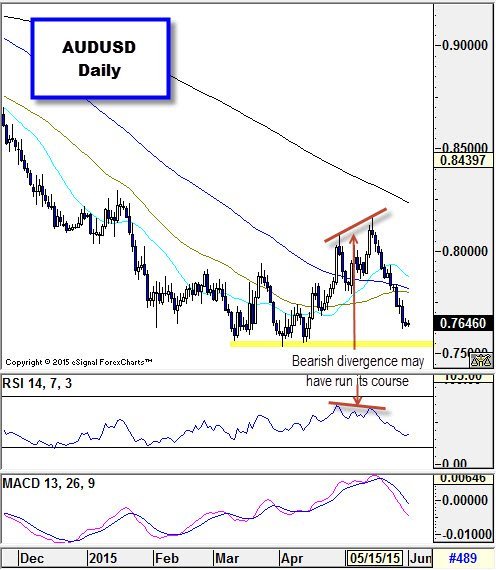