FTSE: Grexit and Brexit are top worries for the bulls

Overnight, the Chinese stock markets rebounded strongly with the Shanghai Composite advancing 4.7%. It followed the sharp decline we saw at the end of last week, which raises the question whether this was just a countertrend move in a changing trend or was last week’s drop a mere pause in a 11-month-long rally. While Chinese stocks surged higher, it was a totally different picture in European this morning. Here, equities started the new week and month on the back foot once again before bouncing modestly off their lows.  Concerns about Greece continue to hold investors back from taking on too much risk. Greece and its creditors – the EU and IMF – have been negotiating for months a cash-for-reforms deal, but with the lack of progress on the issue the pressure is now growing. Greece could face a default without aid from a bailout program that expires on June 30. On top of this, there are serious question marks over Athens’ ability to pay back the IMF €300 million it owes it this week and €1.5bn by June 19. However some are still hopeful that a deal will be reached after all, hence the markets are managing on to cling on at these still-lofty levels. Comments from the Greek interior minister, combined with the “constructive” talks between Tsipras, Merkel and Hollande at the weekend keeps the hopes alive. But after months of talks we are in desperate need of some action now, otherwise a much larger sell-off could be on the way as the market positions itself for a Grexit.

In addition to Grexit worries, the FTSE has been held back by concerns about Brexit. If Britain were to exit the EU, many economists including ourselves think it will be an economic disaster. Though the actual referendum may be a couple of years away, which could easily result in a vote to stay within the EU, it has not stopped the markets from worrying. But as far as today’s session is concerned, the commodity-heavy index is held back by the slump in metal prices which has weighed on the shares of the mining companies.  Energy stocks could come under renewed pressure too if crude oil starts heading south once more following the upsurge at the end of last week. There is a good chance of that happening this week because of the OPEC’s meeting on Friday. If the cartel decides to maintain its current production quota of 30 million barrels per day, which is not acted upon anyway, then the status quo of excess surplus will remain and thus prevent crude prices from recovering more profoundly.

Though the underlying trend remains bullish for the FTSE and it is only 150 points or so away from its recent record high, a sharp pullback is looking increasingly likely. The UK index is among a growing list of global stock indices which has simply lost its momentum in recent weeks. The lack of bullish interest at these levels may encourage more longs to take profit, leading to further withdrawal of bids. The sellers meanwhile may also step in here should the situation regarding Greece deteriorates and/or the index breaks its bullish trend line, whichever comes first. The trend line is being tested at the time of this writing and daily close below it is probably what the bulk of the bears are looking for. If seen, the FTSE may then easily drop to the 6875-6900 support range before making its next move. As well as this area being previously support and resistance, the 100-day moving average also cuts through here. Further lower at 6745 is the 200-day moving average and then horizontal support at 6670; these being the next potential bearish targets.  Meanwhile the momentum indicator RSI is also testing its corresponding trend. If both the FTSE and RSI break their trends then the change of direction would be confirmed.

Alternatively, if the bulls manage to defend the bullish trend line once again then a bounce towards the bearish trend and the 78.6% Fibonacci retracement level at just shy of 7060 may commence.  To push the index above this level, the bulls will probably need some assistance from the fundamental side of things – such as a deal for Greece. 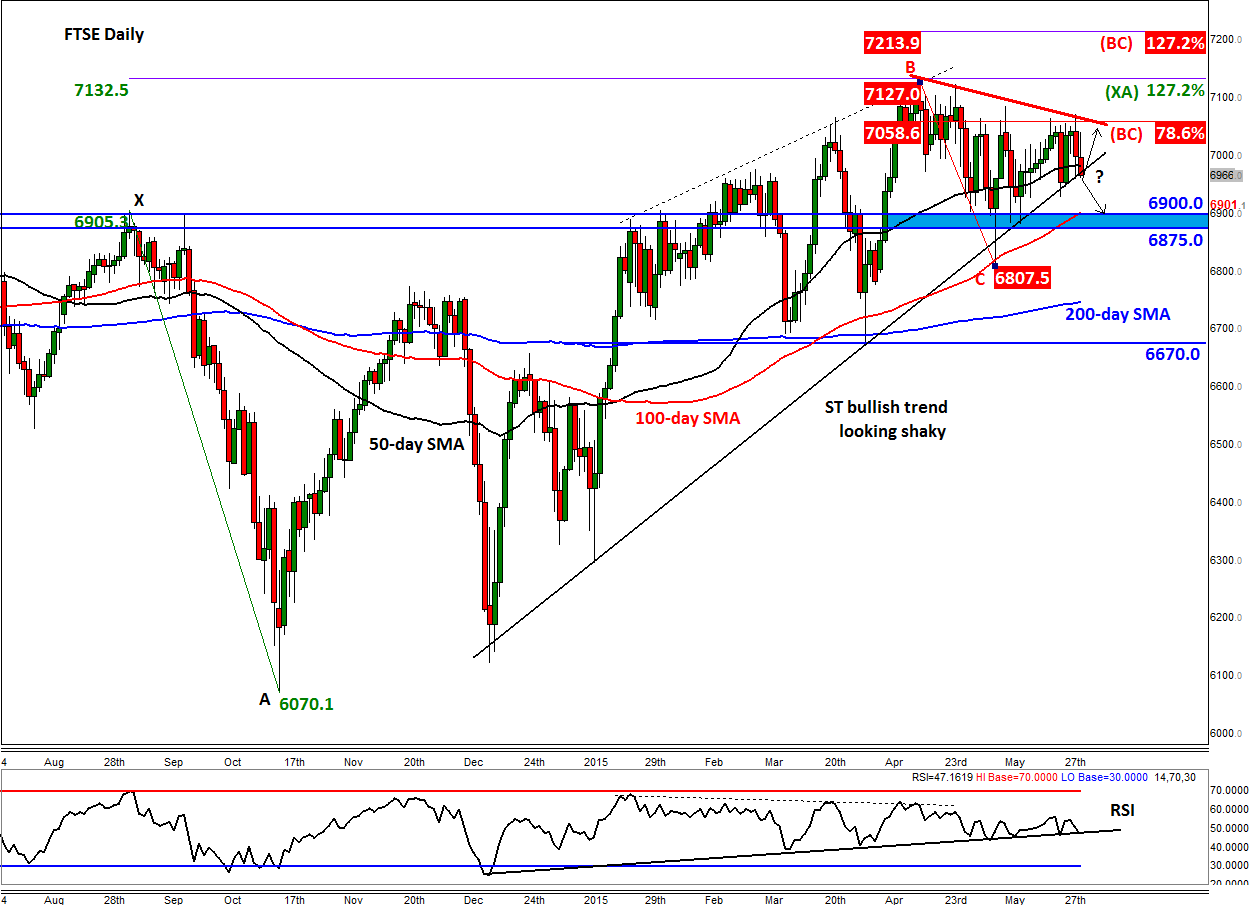