It’s a big week for the EUR as economic data and an ECB meeting all take place in the next few days. To kick things off, German inflation data was released earlier on Monday and suggests that the ECB’s QE programme is starting to reap rewards.

German CPI rose by 0.7% on an annualised basis in May, an 8-month high. This is significant for the region as a whole since Germany makes up nearly 30% of the overall Eurozone CPI index. Thus, when tomorrow’s CPI data is released the risk is to the upside. The market is expecting a reading of 0.2% for headline inflation in May, up from 0% in April, but after the German data earlier today market analysts may be scrambling to revise up their forecasts.

What does a stronger CPI reading mean?

Essentially, even if inflation for the Euro-area is above the 0.2% expected, prices will still be very low, and well below the ECB’s 2% target rate. However, it’s not only the absolute level of CPI that the ECB watches; it also monitors the rate of change. CPI has risen from a low of -0.6% in January and could rise above 0.2% a mere 5 months later. If we continue to see CPI rise at this pace then the ECB may start to question the longevity of its QE programme.

Since CPI has had a dampening impact on the EUR, anything that could limit its lifespan could trigger the opposite effect; hence a stronger CPI reading on Tuesday may boost the single currency. In recent weeks the EUR has moved on the back of expectations that the Fed is getting reading to raise interest rates; however on Monday the dovish President of the Boston Fed argued against a rate hike, saying that the US consumer may not be strong enough to withstand higher borrowing rates. This knocked the dollar, and EURUSD tested its 50-day sma resistance at 1.0969, before falling back below 1.09 on the back of stronger US manufacturing PMI.

Overall, we continue to think that the longer term picture for EURUSD is weaker, although the fundamental developments this week, including the ECB meeting and Greek developments, may end up being EUR positive.

At the end of last week it looked like selling pressure on EURUSD had increased, however, after the comments from the Fed’s Rosengren earlier on Monday, the EUR selling temporarily slowed down. EURUSD is currently getting stuck at the 50-day sma even after the better than expected German CPI, as a stronger manufacturing ISM boosted the USD this afternoon. Thus, we may need a hefty inflation beat on Tuesday to get the EUR safely above this hurdle.

For us to start to get bullish on EURUSD in the short term we will need to get above 1.1006 – the high from 29th May, and then 1.1050 – a key resistance level that has stymied many a EUR bull. Above here opens the way to 1.1091 – the 100-day sma. If inflation misses expectations then we could see downward pressure build on EURUSD and we may fall back below 1.0868 – the low from last week. Overall, at this junction the bias seems to be to the downside for EURUSD, as not even the German inflation data could shift the yield bias away from the USD, as you can see in figure 1. 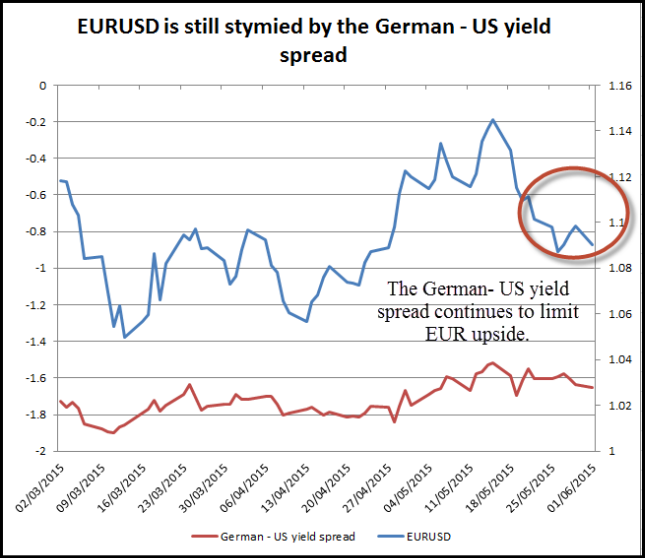