The month of June is officially underway and with it comes the official start of summer (in the Northern Hemisphere – apologies to my Australian friends!). When it comes to the forex market, June has historically been a slower month, with EURUSD limited to just a 200 pip top-to-bottom range last June, and many traders fear that these slow trading conditions will repeat this year. Whatever this month brings, the action-packed economic calendar in the G10 should keep traders pinned to their seats for this week at least. The EM economic calendar is less eventful, though there still are a couple of key releases for traders to keep an eye on including interest rate decisions in Mexico (expected to remain on hold at 3.0%), India (expected to cut 25bps cut), and Brazil (expected to hike 50bps), as well as CPI data out of Turkey and Russia.

Speaking of Russia, the ruble has fallen to a 6-week low against the US dollar today. The current drop in ruble (rally in USDRUB) has been driven by four main factors:

Most straightforwardly, the broad-based strength in the world’s reserve currency has made most other currencies into laggards by default. After last week’s consolidation above the 50-day MA, the US dollar index may be on the cusp of renewing the mid-May rally.

This weekend brought rumors that Russia has developed a new “stop list” that bans nearly 100 top European politicians from entering the Motherland. The list, which has not been officially confirmed by Russia’s foreign ministry, reportedly bans leaders from the UK, France, Germany, and other countries that have criticized Russia. It’s not as if these politicians were regularly jetting off to spend their riches in Russia, so the rumored list won’t have a direct economic impact, but it does signal that relations between the Russian and EU remain frosty. With the European Council meeting to discuss whether to extend economic sanctions against Russia later this month, the chances of an international reprieve for Russia’s struggling economy are rapidly fading.

In terms of the most recent data, Russia’s manufacturing activity is sputtering to a stop. This morning, traders got their first glance at April’s HSBC Manufacturing PMI measure; this reading fell to 47.6, indicating outright contraction in manufacturing activity for the sixth consecutive month. The constant drumbeat of weak economic data continues to take its toll on ruble bulls.

Finally, Russia’s central bank suspended auctions for one-year foreign-currency repurchases, making it more difficult for banks to sell rubles and invest in higher yielding assets. Combined with 450bps of rate cuts already this year, it’s clear that Russia’s central bank wants to see its currency weaken and is willing to take steps to push the ruble down.

Turning our attention to the chart, USDRUB has broken out of its 4-month bearish channel. Given the ruble-bearish fundamental catalysts, buyers may now look to press the pair up to its Fibonacci retracements at 53.90 (23.6%) or 57.25 (38.2%). The widely-watched 100-day MA may also provide resistance around the 57.25 level. Meanwhile, the MACD has also turned higher and is about to cross the “0” level, signaling a shift to bullish momentum, and the RSI has yet to reach overbought territory. As long as USDRUB holds above previous support at 49.00, the market will likely look at short-term dips as opportunities to accumulate the pair for a medium-term rally. 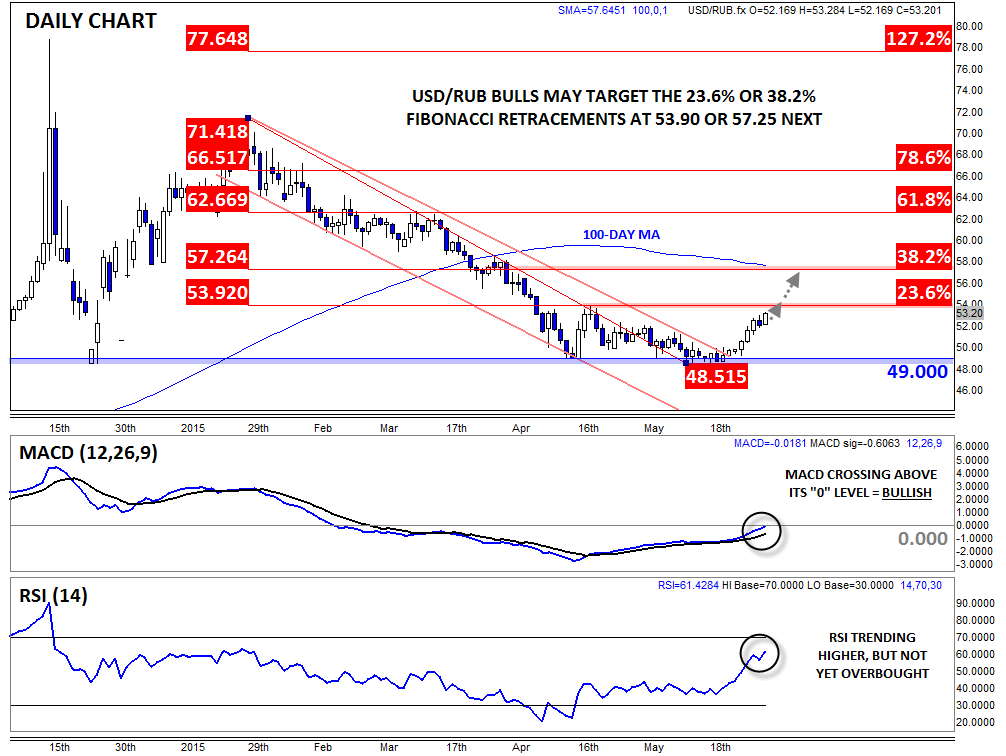