The EUR/USD surged higher today, rallying some 275 pips from its low to the high before easing off just ahead of the 1.1200 handle. The rally was fuelled first and foremost by speculation about Greece. Following late night talks in Berlin, the Greek PM Alexis Tsipras tweeted that they have submitted a “realistic plan for an agreement…” and that “it is now up to the political leadership of Europe to decide.” Likewise, Greece’s creditors were reported to have reached a consensus on the terms of a proposed deal to put forward to the Greek government, according to the WSJ. Although a deal looks imminent now, there are still some big hurdles to clear. Once the plan has been agreed upon, the Eurozone finance ministers will need to sign it off. With the next scheduled Eurogroup meeting being on June 18, the actual disbursement of the €7.2 billion bailout funds may therefore take some time yet. Nevertheless, that would be the least of the Greek government and market’s worries. With the euro already gaining this much ground, the potential announcement of the news may not lead to an automatic rally. Indeed, I wouldn’t be surprised if traders “sold the news” as evidently they are already buying the rumour.

Meanwhile there have also been some actual fundamental reasons supporting the euro beside speculation over Greece. This morning saw inflation in the euro zone rise for the first time in six months. The headline CPI for the month of April showed a reading of 0.3% year-over-year versus 0.2% expected. Core CPI was up a good 0.9% versus 0.6% previously. We also had some decent employment numbers out of Spain and Germany. The number of unemployed Spaniards fell by a good 118,000 while in Germany the decline was a modest 6,000 month-over-month. Clearly, the ECB’s record low interest rates and the huge bond buying stimulus programme are having the intended impact on the euro zone economy. However it is still too early for the ECB to turn hawkish, although any suggestions on Wednesday by Mario Draghi about an earlier-than-planned end of QE could see the euro surge even higher. Also aiding the EUR/USD rally today has been the release of some soft economic data out of the world’s largest economy. US factory orders surprisingly fell by 0.4% month-over-month in April while the IBD/TIPP Economic Optimism unexpectedly dropped to 48.1 from 49.7 in May. There will obviously be a lot more important US macro pointers to look out for later in the week, which means the EUR/USD volatility – and trade opportunities – could increase even further.

From a technical point of view, the moves in the EUR/USD look very interesting. As can be seen on the chart, the 61.8% Fibonacci level has once again proved to be very important in determining the direction. The downswing from the May high of 1.1466 ended around the 61.8% retracement of the upswing from March low, around 1.0845.The bounce from here lost steam around point D at 1.1005, but the corresponding sell-off once again came to a halt at the 61.8% Fibonacci level (point E). Evidently, traders have been buying the dip. Today’s break above 1.1005 momentarily faded at the 1.1050/75 resistance area, but such was the strength of the breakout that price spike through this area shortly afterwards. Clearly, some weaker hands were taken out in this short squeeze rally, which probably added further fuel to the move.

Going forward, traders will want to watch the area around 1.1200 with keen interest as this is the next key area of resistance. As well as the prior high, the 61.8% Fibonacci retracement of the downward move from the May high (i.e. the BC swing) converges with the 261.8% extension of the DE swing. Given that price spiked close enough to this area earlier, it could be that the EUR/USD may have already peaked for the time being. Nevertheless, further gains could be on the way if the buyers now step in to defend the broken resistance area between 1.1050 and 1.1075. A potential break below this area would thus be a bearish outcome. 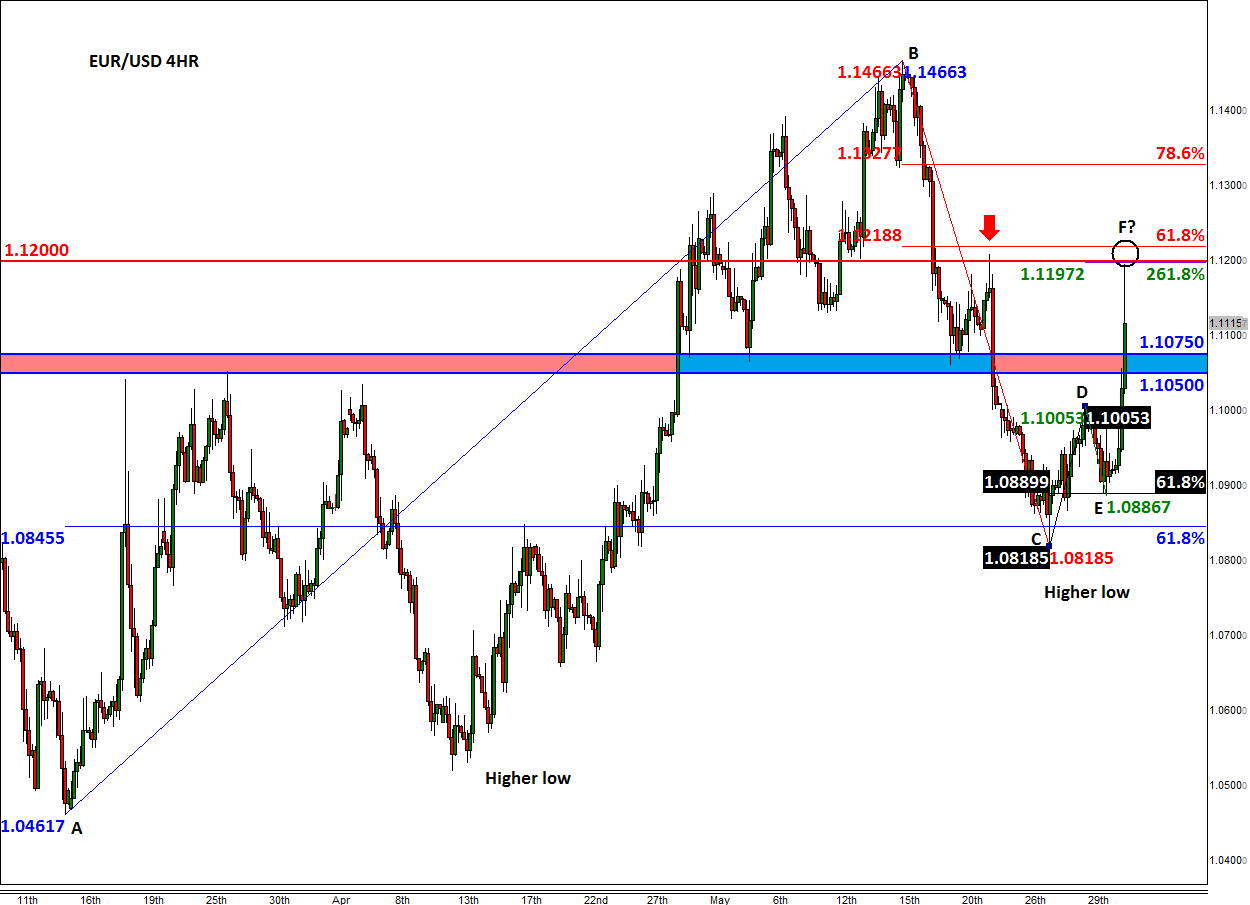