The Australian dollar has been unstoppable in the last few trading sessions. The RBA provided the fuel AUDUSD needed to get off the ground and widespread US dollar weakness kept it aloft before Australia’s stronger than expected Q1 growth figures propelled it even higher. AUDUSD was propelled above 0.7800, which is around a 200 pip gain for the pair in less than 24 hours. It may take an unexpected surprise to the upside from the all-important US May NFP report to shoot down the pair, although it will have to dodge more Australian and US economic data before then.

Australia’s economy grew 0.9% last quarter, accelerating from 0.5% in Q4 2015 and beating an expected 0.7% expansion. The economy’s year-on-year pace slowed to 2.3% from a revised 2.4% in the prior quarter, but this was still better than the market expected. However, investors are still clearly concerned about the potential for a slowdown in growth in coming quarters, largely because non-resources parts of the economy are failing to pick up the slack being left behind by diminishing mining investment.

This dark cloud looming over the Australian economy could rain on AUD’s parade, but a potential unwinding of the US dollar if US economic data is softer than expected could still support AUDUSD. This uncertainty about AUDUSD’s future, backed a shaky recovery in the US and an uncertain economic outlook in Australia, is making the pair even more volatile than usual and the RBA nervous. Stevens and his cohorts at the RBA have been very vocal about their disdain for a strong exchange rate, but it’s unclear what the bank can do weaken it; verbal intervention can only go so far and actual intervention may only weaken AUD in the short-term – there’s an old saying that traders shouldn’t attempt to fight a central bank, but the RBA also knows it would be futile to fight the broader market in the long-run.

Data and event watch for AUDUSD this week (all times are in AEST): 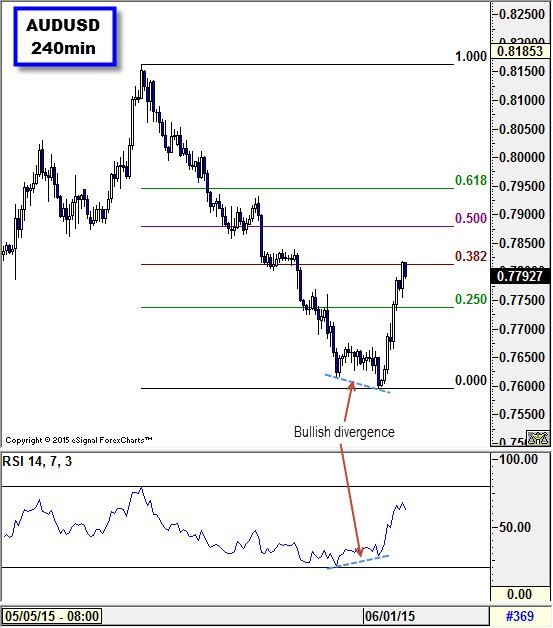