Not even a sharp rebound in the Chinese equity markets has been enough to inspire a rally in Europe. Here, Greece concerns continue to weigh on sentiment due to the on-going standoff between the troubled nation and its international creditors. Overnight in China, the Shanghai Composite was down more than 5% at one stage. It ended the session with a gain of 0.7%. In contrast, European markets have failed to react positively to this seemingly key reversal day in the Chinese equity market. This morning the German DAX was off by 200 points while the continent’s other leading indices were also down quite sharply.

As well as the on-going Greek saga, the turmoil in the bond market is unnerving equity investors. The benchmark German bunds are selling off for a fourth consecutive day, which is helping to push yields and the euro higher. Although some have attributed the latest sell-off in bonds to comments from Mario Draghi yesterday, the ECB President merely stated a fact in that investors should get used to increased volatility as yields are at or near historically-low levels. There is so much that yields could fall; it is not reasonable in our view to expect them to remain at, below or near zero for a prolonged period of time. The impact of the ECB’s bond buying program and the resulting weaker euro is having a desired impact on economic activity in the euro area. Once it becomes apparent that growth is picking up in the single currency bloc then equities could react more positively to rising bond yields.

At the moment though, sentiment is not too great due to the bond market sell-off and the Greek concerns. Therefore stocks may retreat further in the near term. Ultimately however the longer term outlook for European equities remains bullish due to the ECB’s current ultra-loose and unconventional monetary policy stance and also the potential for a sharp rebound in economic growth, among other factors.

Thus, the likes of the German DAX index may have to head further lower before bouncing back and embarking on a Nikkie-like rally.  If the DAX breaks the key 11200 support level (which is being tested at the time of this writing) on a closing basis then this could pave the way for a move towards the Fibonacci levels shown on the chart. Among these Fibonacci levels, the key one could be at 10690 which is the 161.8% extension of the last rally that started and ended in May (i.e. of the BC swing. Incidentally, that rally had ended at the 61.8% retracement level (11930) of the AB swing – that’s the beauty of harmonic price action!). Not only does the 161.8% Fibonacci level mark a potential exhaustion point for the bears, it is also represents the point D of an AB=CD pattern and thus a Bullish Bat/Gartley pattern too.  Making it even more intriguing is the fact that the point D comes in right at the support trend of the bearish channel, though this will partly depend on the speed of index’s potential drop to this level. But that is if the DAX gets there in the first place, because as mentioned, the index is testing that 11200 support at the time of this writing which could hold and lead to a sharp bounce.  But regardless of the level the DAX eventually bounces from (if it does), our bias would turn decidedly bullish upon the break of the resistance trend of the bearish channel (which could be a longer term bull flag of course).

In short, there is a possibility for the DAX to bounce back from the key support at 11200. But if it breaks down this important support level decisively, then the next stop could potentially be at 10690, where we would then expect to see a sharp rebound from. Thus, there could be plenty of trading opportunities for both the bulls and the bears alike on this popular stock index. 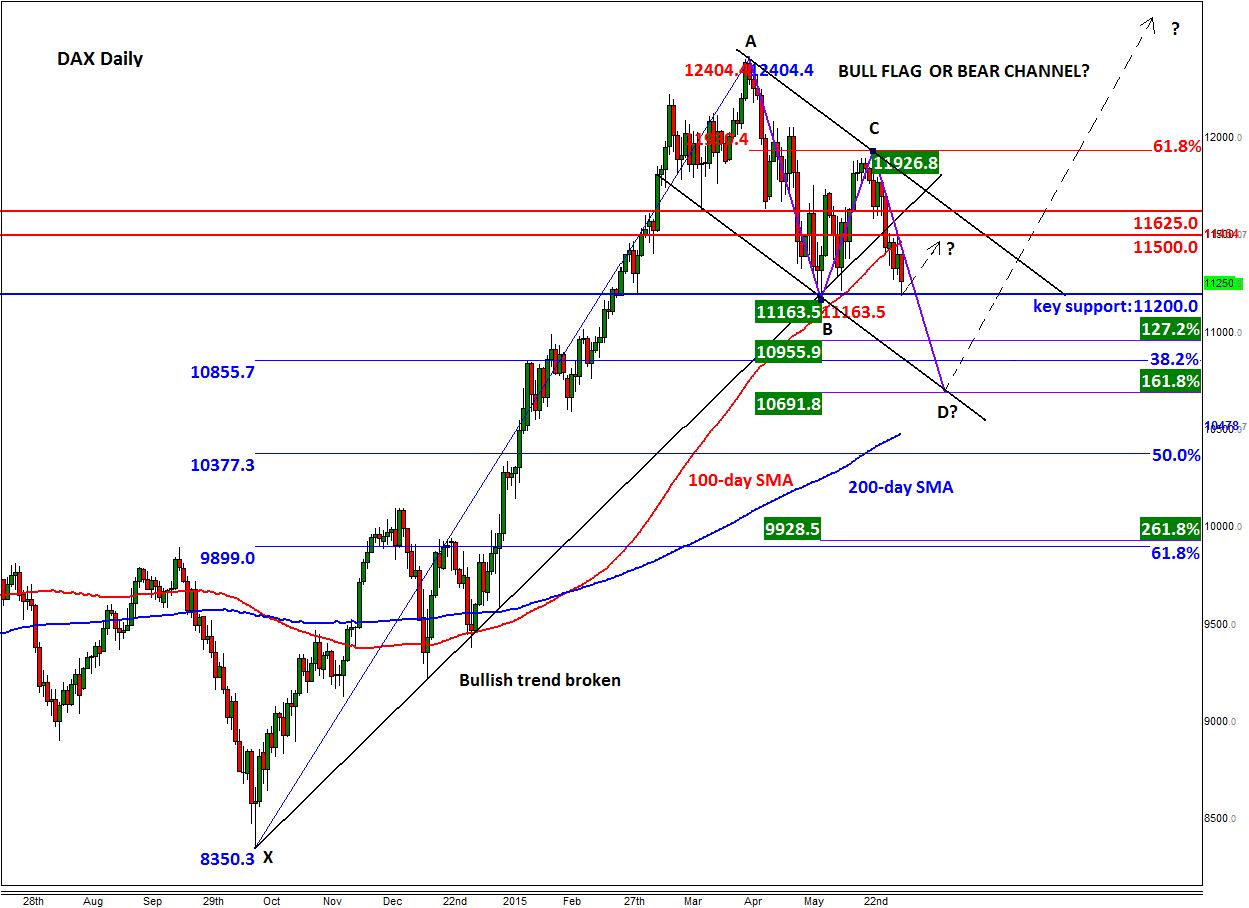