EURUSD: is 1.15 back on the cards as German bond yields soar?

There is only one thing driving the EUR this week, and that is the jump in German bond yields. Since the start of this week, EURUSD has followed German bond yields 92% of the time, it is a similar story for EUR crosses, with the trade weighed EUR (as measured by Deutsche Bank)  having a perfect correlation with German bund yields in recent days.

To put this in context, at the start of this year, EURUSD and 10-year German yields had an insignificant correlation of 24%, at the start of May this rose to 53%, before surging in the second half of last month (see figure 1). This suggests a couple of things:

Why is the ECB in sharper focus than the Fed?

The last point noted above is worth exploring. It has been a momentous week for the Eurozone after inflation pressures continued to build: core inflation rose by more than expected to 0.3% last month. If this pace continues then deflation could soon be a thing of the past. This has over-shadowed US economic data, even though we had another strong manufacturing ISM report last month and a 201k reading for the ADP employment report. With Fed members likely to remain quiet until the next FOMC meeting on 17th June, this could keep the Eurozone in focus for the next couple of weeks.

Hence, even though the prospect of a Fed rate hike is on the cards for the coming months, much more interesting for the markets is the tightening in the German – US yield spread, which has recovered to a 4-month high (see figure 2). After the ECB’s Mario Draghi said that markets should expect periods of bond market volatility, the US Treasury market is looking like a wall flower compared to its European counterpart.

The risk to German bond yields:

Although German bund yields have risen at a furious pace this week, there is a risk of a reversal due to:

The EUR is the second top performing currency in the G10 so far this week as it gets a boost from surging German bond yields. But, after 3 days of gains, has the EUR gone too far too fast?

We believe that we could still be in the middle of the EUR move and after slicing through prior resistance at 1.1217 – the high from 19th May, EURUSD looks like it may re-test the high from 15th May at 1.1467. We need to pass this 1.15 hurdle before the market can say EURUSD has broken out, until then we are still in range-trading territory, albeit with a bullish bias. Key supports to note as we lead up to the US payrolls report include: 1.1077 – the 50-day sma, then 1.0989 – the 50-day sma. 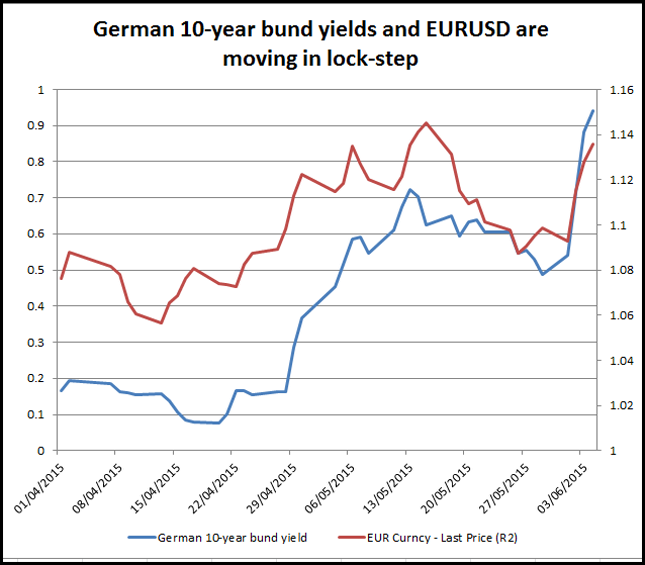 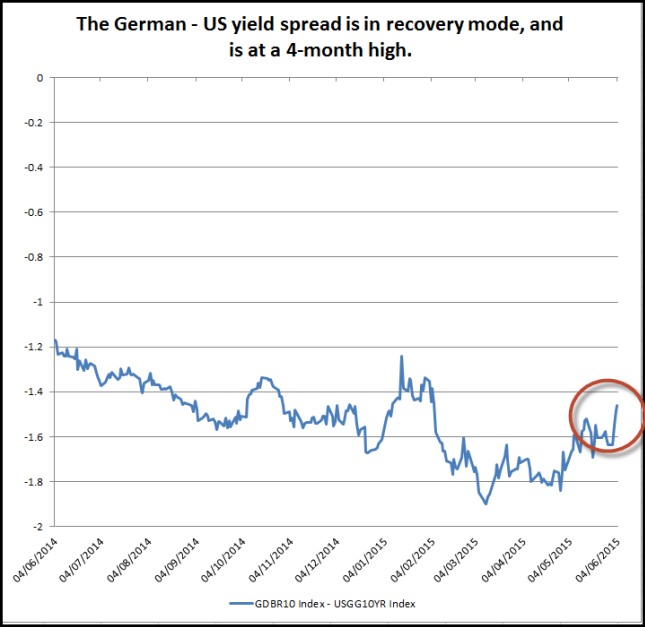