NZD/USD: Kiwi getting crushed ahead of NFP

Today has been another volatile day in the markets with government bonds, stocks and currencies bouncing around wildly in no clear direction. Commodities have been weaker with gold hitting its lowest level since May 1 and crude oil plunging ahead of tomorrow’s OPEC meeting where the cartel is widely expected to maintain its production quota of 30 million barrels of oil per day. This has put pressure on commodity currencies across the board. Unsurprisingly, the dollar has bounced back after a sharp two-day sell-off as traders prepare for the US monthly jobs report tomorrow. With several labour market indicators improving last month, expectations are high that the report will reveal another strong gain in the number of nonfarm payrolls (consensus: 226,000 vs. 223,000 in April).

Typically, it is the USD/JPY currency pair that shows the most straight forward reaction to the jobs data. But this time, we are looking at the NZD/USD because this pair recently took out a key support level around 0.7200, which has now turned into resistance. As the buyers have failed to hold their ground here, this could lead to further technical selling. The fundamentals don’t look great either for the Kiwi with the RBNZ recently turning dovish amid the sharp falls in key commodity prices, such as powdered milk. Meanwhile the Fed remains on course to raise interest rates later this year.  Thus, the NZD/USD pair remains extremely vulnerable for both technical and fundamental reasons.

The Kiwi bulls are in desperate need of a bad jobs number. But if the data reveals another strong reading then the selling pressure could increase dramatically, as the bulls further reduce their positions. This, as well as the possibility of renewed selling pressure, could lead to a sharp drop in the NZD/USD.

As mentioned, the NZD/USD has not only broken below the key 0.7200 handle, but this level has now turned into resistance.  The Kiwi is also stuck inside a bearish channel. So, as things stand, the path of least resistance is clearly to the downside. Only a closing break above 0.7200 or the upper trend of the bearish channel would alleviate some pressure. Until and unless that happens, a drop towards the psychological 0.70 handle looks the more likely outcome. Traders may also want to keep an eye on the Fibonacci extension levels of the last major upswing, at 0.7020 (127.2%) and 0.6825 (161.8%) as we could see some profit taking around these exhaustion levels, should we get there. 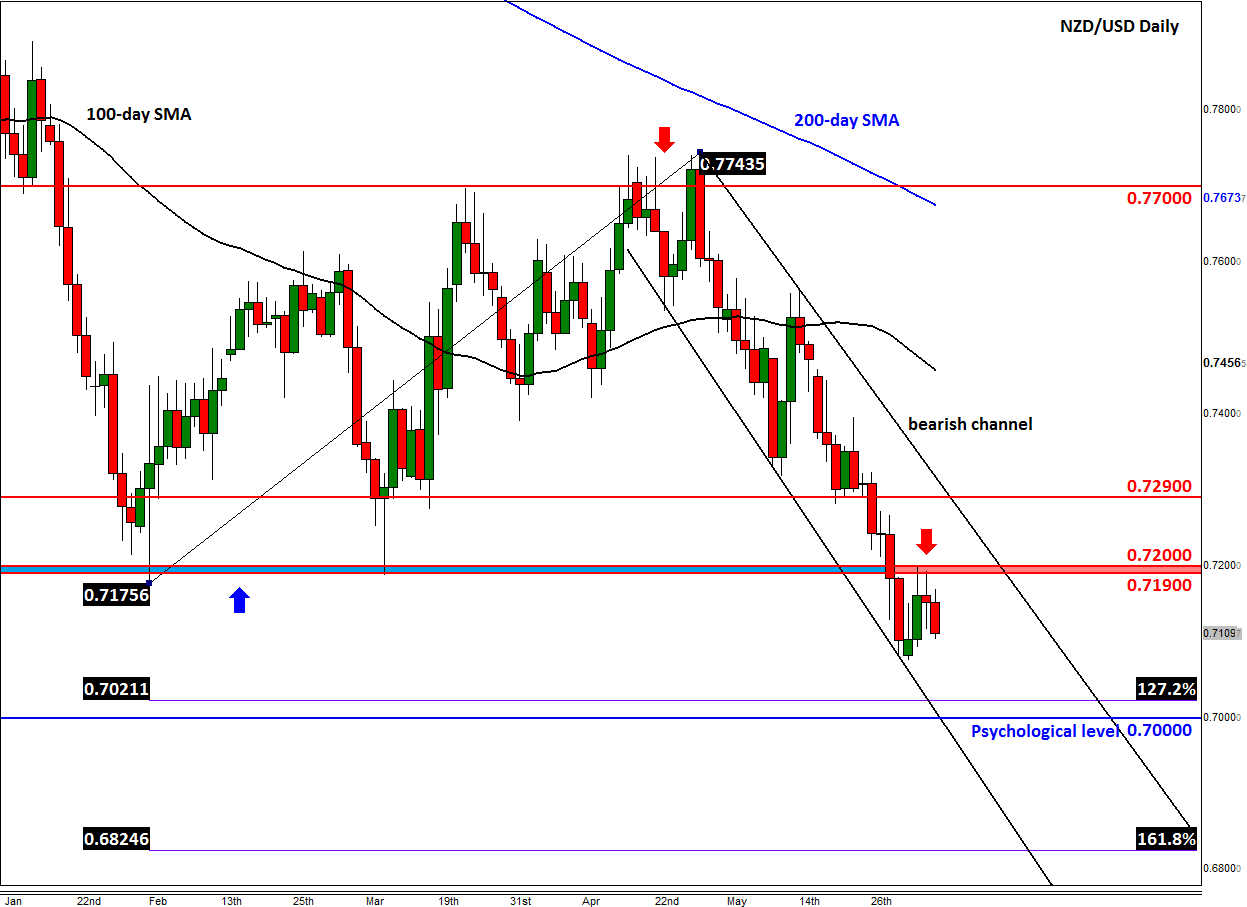