European stocks have opened the new week on the back foot with the German DAX index now in the official correction territory after slipping more than 10 per cent from its April peak. Other European markets are also lower today and now the Euro Stoxx 50 index appears to be on the verge of a technical breakdown, despite the sharp rally in Deutsche Bank shares today.

Once again, the on-going uncertainty over Greece continues to weigh on the sentiment. There has been no real progress on this issue from Friday. In fact, comments at the weakened from the Greek PM Tsipras in a speech to the parliament where he criticized Greece's creditors, calling their reforms-for-aid proposals "absurd" and "irrational, blackmailing demands" seems to have upset its international creditors. The European Commission President Jean-Claude Juncker said he was a "little bit disappointed by the speech."

Understandably, traders are cautious today particularly as there is no major US data scheduled for release. Earlier, economic numbers from the euro zone were mostly better, but were overshadowed by concerns over Greece. Industrial production in Germany rose by an above-forecast 0.9% in April after declining 0.4% the month before, while exports climbed by 1.9% over the same month. However the Eurozone Sentix Investor Confidence for June came in at 17.1 when a reading of 18.7 was expected. It was also lower than the prior reading of 19.6. Undoubtedly, investor sentiment has been hurt by the recent turmoil in the bond markets as well as the Greek saga.

Meanwhile, investors are also growing worried about the health of the Chinese economy following the release of some more disappointing data, although local traders have interpreted this as an impetus for further policy easing – hence the sharp rally in the Shanghai Composite overnight. Nevertheless, a slowdown in the world’s second economy is a concern for the rest of the world because imports there slumped by 18.1% in May from a year earlier – its worst drop in three months. Exports weren’t great either with overseas shipments falling for a third consecutive month, this time by 2.8%. Stronger demand from the US helped to prevent a deeper fall in Chinese exports.

At the time of this writing, the Euro Stoxx 50 is testing a pivotal level of support at 3480/5 – the low from May. Though it is possible we may see a bounce (as the shorts may be looking to book some profit after their recent good run of form), the recent price action favours a break below here.   After all, a rising trend line has already been broken which suggests that the bullish trend may have ended – it has certainly weakened now. What’s more, the index is declining inside a bearish channel and the support trend, around 3345/50, is still some distance away.  So, there is the potential for a 130-point drop if the 3480/5 support level gives way now. Incidentally, the lower trend of the bearish channel also corresponds with several other technical factors, making 6645/50 a key area of support. These include the 200-day moving average, the point D of an AB=CD pattern and the 161.8% Fibonacci extension level of the BC swing. Ahead of 3345/50, the two Fibonacci levels between 3420-3430 (i.e. 38.2% of the XA and 127.2% of BC swings) should also be watched closely as they could also turn into support. Meanwhile the key resistance level to watch is around 3600, which corresponds with the upper trend of the bearish channel. A deal for Greece is probably a prerequisite for a potential break outside of this bearish channel, which, if seen, could re-establish the long-term bullish trend for the Euro Stoxx 50 index. 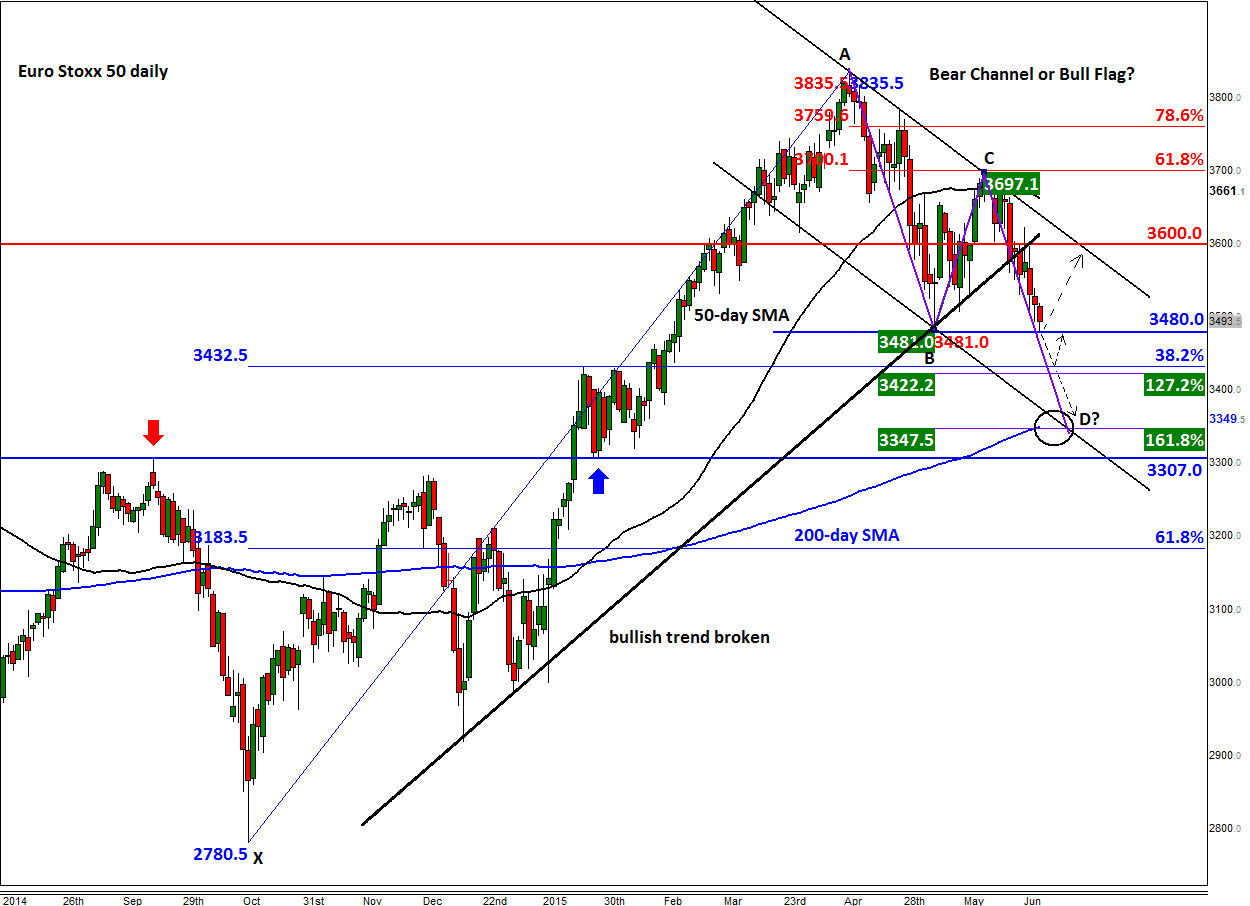