Precious metals look anything but precious after their recent bad run of form. Gold is flat and silver is lower, with the latter mow down for the fourth consecutive session. That’s despite the fact that both the stock markets and dollar are also out of favour (our latest views on the European and US stock markets are expressed HERE and HERE, respectively). Under normal circumstances, these market conditions, coupled with the Greek uncertainty and the very low and negative interest rates, would have favoured a move to the upside for the shiny metals. But the fact that the metals are not responding positively to these conditions is, in our view, rather bearish.

Out of the two major precious metals, silver is finding itself on a more shaky footing. That is because of silver’s dual usages as a precious metal and an industrial material. After all, industrial demand from China appears to be falling in line with the general slowdown in economic activity. The latest data from the world’s second largest economy expresses this view clearly, with goods imports collapsing 18.1% in May from a year earlier – its worst drop in three months. Exports weren’t great either with overseas shipments falling for a third consecutive month, this time by 2.8%. China’s latest industrial data will be released on Thursday and we should have a better idea then about the level of demand for silver and other industrial materials.

From a purely technical point of view, silver is currently testing a 6-month old bullish trend line around $16.00. Though it is possible for price to bounce back from here, a potential break of this trend could pave the way for further follow-up technical selling. As a result, the metal could drop all the way to $15 or even lower before making its next move. In fact, the next major logical level of support seems to be the low that was achieved in December at $14.40. Given the symmetrical price action that we have seen of late, a bullish Gartley double bottom pattern could also come in or around that level.  But for price to get there, the sellers would have to chop some wood as there are several other Fibonacci and/or horizontal supports now in sight, such as those shown on the chart.

Meanwhile if the bullish trend line holds, or otherwise price finds some support soon, the key level of resistance the bulls would then have to tackle is $16.60. This level was formerly support and resistance. The 200-day moving average would be another hurdle that they would need to clear before the technical outlook could turn bullish. 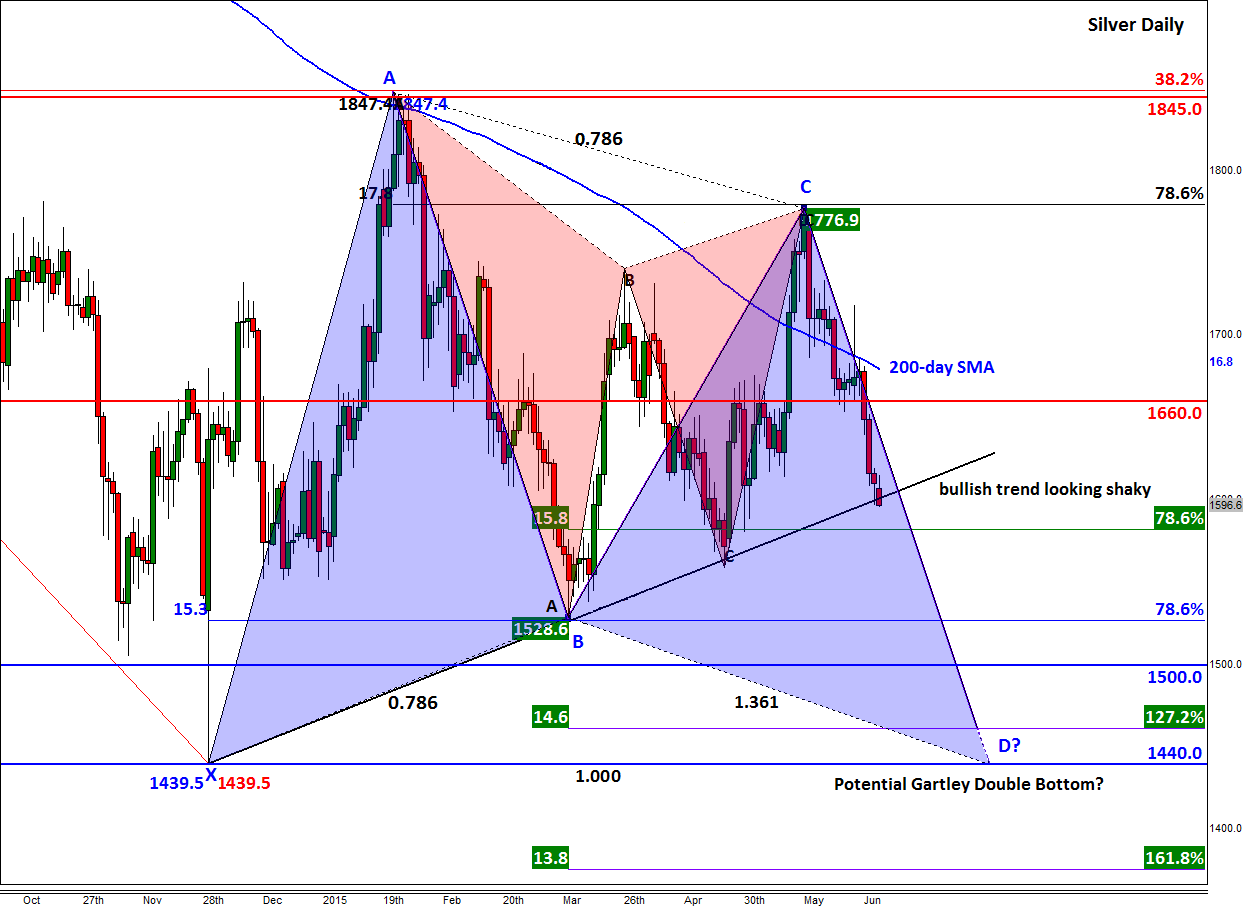