It was a particularly eventful night of trade in the currency market, and by far the biggest news was the coordinated “jawboning” of the yen by Japanese policymakers. The BOJ and Japan’s government are clearly becoming concerned with the big drop in the value of the yen, and it looks like last week’s move above the psychologically significant 125.00 level ($0.8 cents per yen) may have been the final straw. At least three top-level public figures gave yen-negative speeches in today’s Asian session; a selection of their relevant quotes is presented below [emphasis mine]:

The almost-identical “slow and stable” wording from each policymaker suggests that they coordinated behind closed doors to present a united front to the market. The yen’s value has been a critical monetary policy tool for the BOJ for years, and today’s comments suggest that the central bank has now decided that the costs of a weak yen are starting to outweigh the benefits.

As you would expect, the BOJ’s message is coming through loud and clear for traders. After edging up to a 13.5-year high at nearly 126.00 to start the week, USDJPY has shed 300 pips to trade back down below 123.00. The reversal is a particularly devastating blow for technical traders, who piled in to buy the pair after the big breakout. Those bullish traders are now in the unenviable position of trying to decide whether to close their positions at a loss or try to ride out the bearish storm. The secondary indicators further hint at a significant top, with the MACD rolling over to cross back below its signal line and the RSI dropping sharply after a clear bearish divergence.

From here, USDJPY bears may look to target previous-resistance-turned-support at 122.00 next, and if that level gives way, a more significant fall toward 120.00 could be in play. While a short-term bounce is possible after such a dramatic drop, buyers may remain shell-shocked as long as rates remain below the 125.00 level. 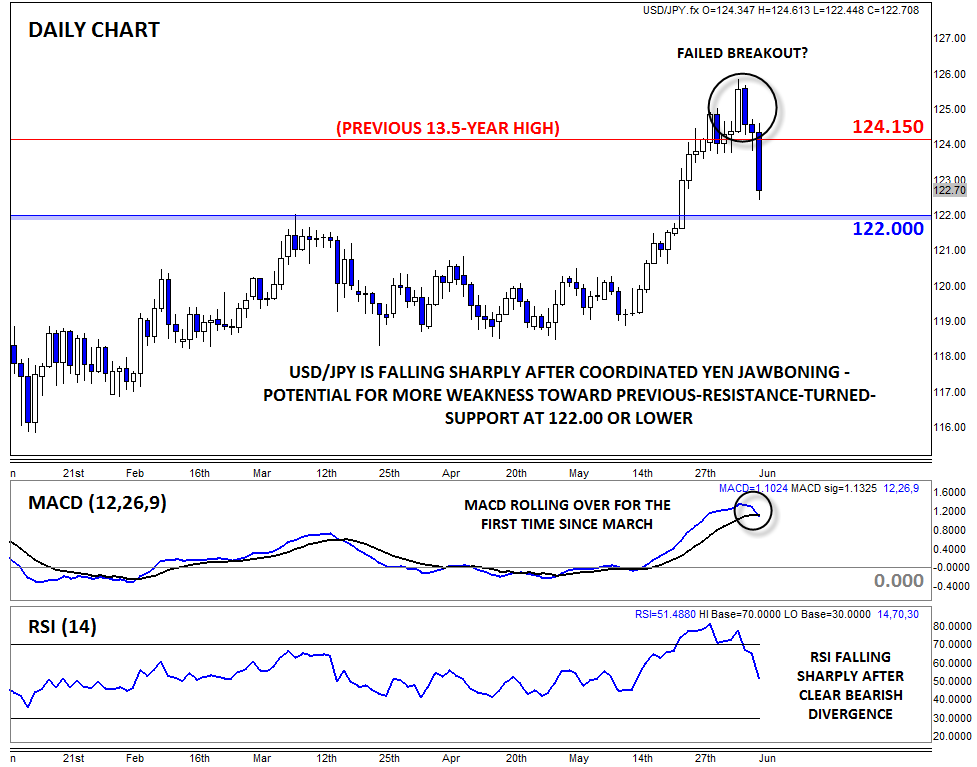