Has the RBNZ finally succeeded in sinking the kiwi?

The Reserve Bank of New Zealand (RBNZ) cut interest rates for the first time in four years, lobbing 25 basis points off the official cash rate, citing low inflationary pressures and an expected weakening in demand. At the same time, the bank opened the door for even looser monetary policy later this year, with Governor Wheeler noting that further easing may be appropriate beyond today’s cut that brought the OCR to 3.25%, despite the threat of a property bubble in Auckland. Wheeler pointed out that the proposed LVR measures planned for October 2015 should ease investor activity in the property market.

The NZ dollar was mauled by bears following the bank’s decision to loosen monetary policy, with NZDUSD touching its lowest level in over 4.5 years. Meanwhile, the volatility in NZ dollar saw the biggest intraday move in AUDNZD since August 2013, with the pair gaining almost 2% at one stage as a slew of stops were wiped out between 1.0900 and 1.1000.

The volatility in the kiwi is due to the mixed expectations of the market prior to the meeting. Only around 50% of participants were expecting the RBNZ to loosen monetary policy, at least according to the interbank market. Furthermore, not only did the bank cut the OCR, it suggested that it may loosen policy even further in the foreseeable future and verbally assaulted the exchange rate once again. There’s no silver lining for the kiwi this time around, it’s all storm clouds.

The bank has been setting the stage for a cut for over a month now, ever since RBNZ Assistant Governor McDermott made some fairly dovish comments about the outlook for interest rates in NZ. McDermott stated that the RBNZ isn’t considering hiking interest rates at this stage and weaker demand and inflation would prompt rate-cut talk. The RBNZ reinforced his view at its policy meeting a few days later and has been working on macro-prudential tools to cool the housing market. This was the beginning of the end for the NZ dollar.

Today’s announcement has clearly put the kiwi on the back foot, but it hasn’t mortally wounded NZDUSD; the pair remains above an all-important support zone around 0.7000. Above 0.7000 there’s some room for a technical retracement, but the fundamentals have now completely shifted to the downside for the NZD, at least in the near-term. A rebound in dairy prices, domestic economic activity and/or an even stronger than expected performance from Auckland’s housing market may be needed to save the kiwi. 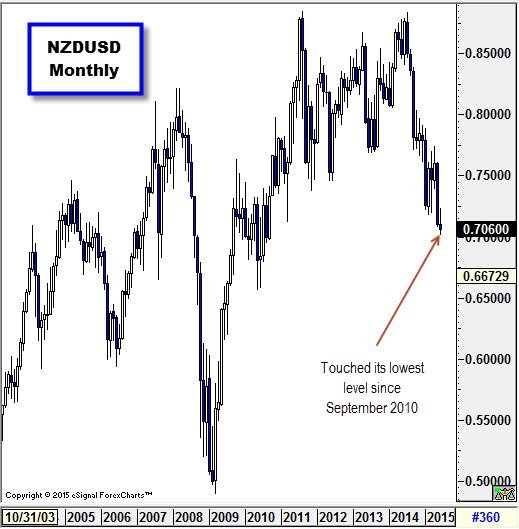