A few interesting things happened in the financial markets this afternoon. First, US retail sales came out significantly stronger than expected, causing the dollar to rally. But that wasn’t the interesting bit. After the initial rally, the dollar gave back a big portion of its gains, which for a time even lifted the NZD off its lows – by 75 pips, no less. The second interesting thing that happened was the extent by which the European stocks markets sold off on fresh headlines regarding Greece. The DAX dropped some 180 points from its high after the IMF said that "major differences" and a lack of progress in key areas remain between Greece and its creditors. Yet, despite the dollar and European stocks losing some of their gains, and Greece concerns coming back to the forefront, gold remained downbeat and there was hardly any “safe haven” buying response from precious metals bulls.  The lack of clear response from this group of market players is representative of an unambiguously bearish trend.  There will be more US data to look forward to tomorrow – PPI and consumer sentiment— and it will be interesting to see if the dollar and gold will respond more decisively to the numbers this time around. If the greenback appreciates then gold could fall further (the opposite may also be true).

As things stand, the technical picture for gold looks decisively bearish. A bullish trend line has already been broken and price is holding below both the 50 and 200 day moving averages. After making a counter-trend move in the previous three sessions, the sellers have come back around the $1187/1189 area, which was formerly support and corresponds with the 38.2% Fibonacci level of the downswing from May. Gold is currently displaying an inside bar on the daily chart, which points to further losses if it closes around the current levels or lower.  The next potential level of support is at $1174, which is the 61.8% Fibonacci level of the upswing from this month’s low (point B).  If broken, the June low itself, at $1162/3, would be exposed for another test. Thereafter is the convergence of the very long-term 61.8% Fibonacci level (you can see this on a weekly or monthly chart) with the 127.2% extension of the much-shorter term upswing from point B.  Meanwhile a bullish outcome would be if gold manages to rise back above the $1187/89 resistance area soon. If seen, we may then be able to observe some follow-up technical buying towards the $1203/06 resistance area (which was previously support and 61.8% Fibonacci level). 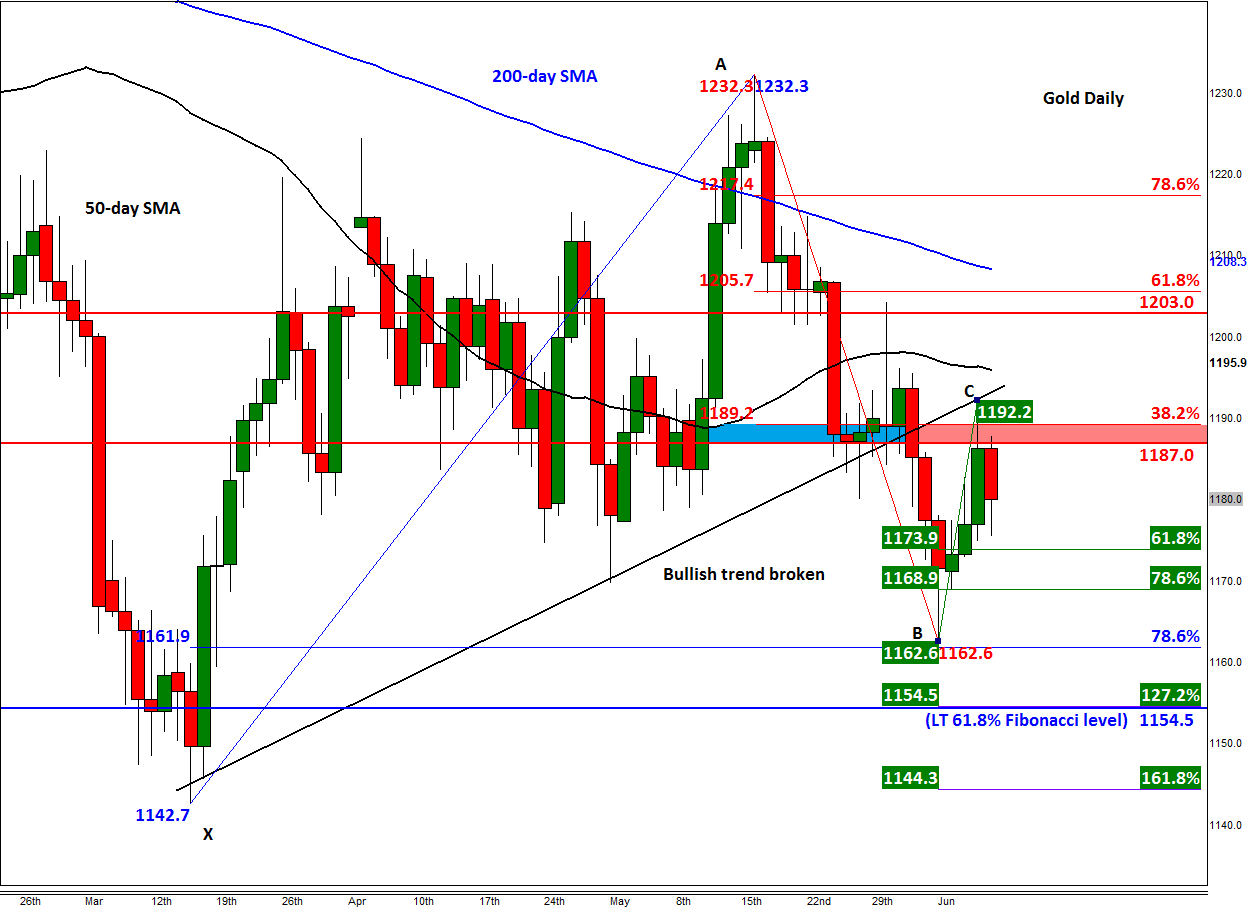