One of the big themes we’ve been exploring this week as the Greek debt negotiations deteriorate (see my colleague Kathleen Brooks’ latest analysis of the situation here) is the appeal of so-called “safe haven” assets. Most traditional safe haven assets are acting as expected, with money flowing into the Japanese yen, US dollar, US Treasury bonds, and the Swiss franc (though the SNB’s decision to intervene in its currency may redirect some of that capital toward the British pound), but there has been one notable laggard: gold.

The yellow metal has been used in human commerce for at least 2,500 years, giving it historical cachet as a store of value, and even J.P. Morgan himself once stated that “Gold and silver are money. Everything else is credit.” At least based on the reaction to this week’s news about Greece, modern traders beg to differ with the great banker.

Gold has held steady within 25 points of the $1200 level for over three months now, and while it did gap slightly higher yesterday after the collapse of the Greek debt negotiations, those gains were short-lived. As of writing, the yellow metal is on track for its lowest close since March, dramatically lagging its safe-haven rivals. We often note that one of the strongest signals in trading is when an instrument fails to act “as expected” to a major fundamental development, and this week’s lackluster reaction suggests that gold may be losing its luster and on the verge of a big breakdown.

For now, the pair remains barely within its 3-month range, but a close below 1170 or so could open the floodgates for bearish traders to target the year-to-date low at 1145. Given the extended consolidation, conservative traders may want to wait for a breakdown in the RSI indicator below its corresponding support level at 40. Meanwhile, a rally off the 1175 floor later this week could portend more frustrating consolidation around the 1200 level as we move through July. 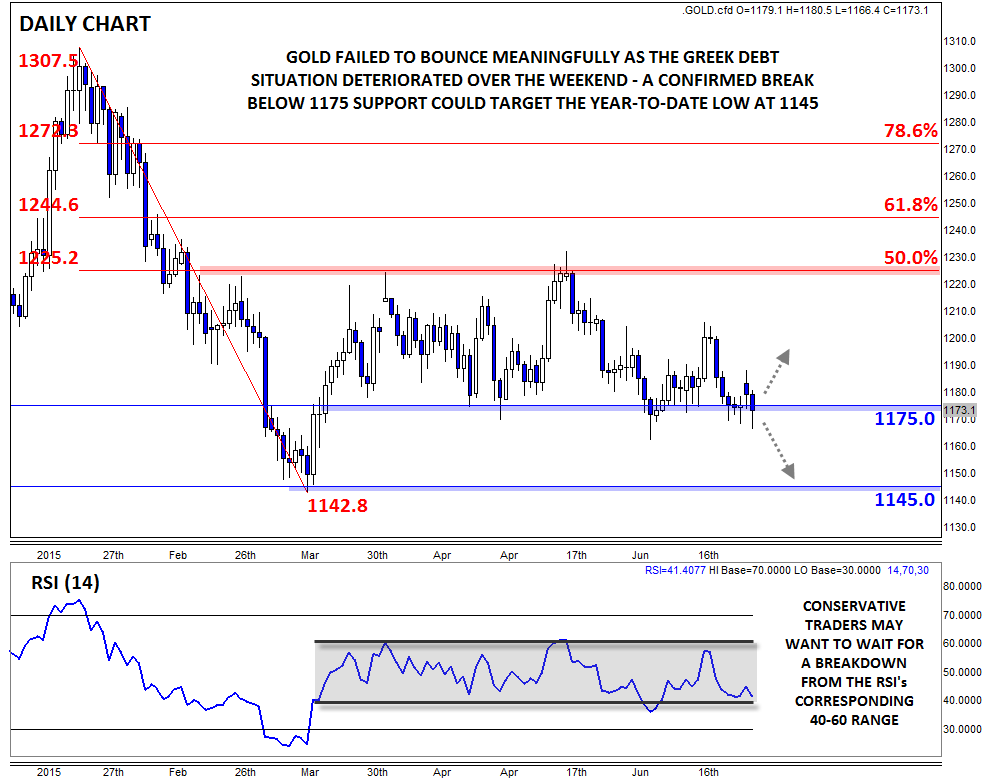