The Nikkei 225 hit a speed bump

Japanese stocks are recovering from their worst sell-off in six months as bargain hunters enter the market. The index suffered heavily on Monday as investor sentiment soured after it became clear that Greece was going to miss last night’s payment to the IMF. In fact, every major equity market in the world felt the repercussions of a possible Grexit, and there was a strong push to the safe-haven yen.

While the yen has retained its strength, a few bargain hunters have stepped to help save the Nikkei 225 from breaking through the base of its upward channel (see chart); a channel which paved the way for price to make a new 18-year high last month after breaking through an important psychological resistance zone around 20,000 in May. Investors are now becoming accustomed to life above 20,000 and we cannot rule out a test of 21,000.

From a fundamental perspective, the indexes recent success has been built on a foundation of monetary policy loosening in Japan. As we have stated in the past, the Nikkei’s fate is heavily tied into the fate of the BoJ’s asset purchase program, as evidenced by a sell-off in the Index following the bank’s policy meeting at the end of April which failed to deliver any further stimulus. This leaves the Nikkei vulnerable to diminishing QQE, but doesn’t necessarily mean that the Index will suffer heavily when the BoJ’s QQE program is eventually tapered.

The aim of the QQE program is to spur economic activity in Japan and if this is the reason behind a tapering of the BoJ’s asset program, then it may not result in an equity-market rout. The tricky thing is that the program has pumped massive amount of liquidity into the market which has found its way into equities, thus the risk is that the withdrawal of this liquidity would provide the market with more options, as it would refocus the bond market on fundamentals, possibly adversely affecting the stock market; the Nikkei’s high premium doesn’t fall in line with its fundamentals. The market needs earnings to move more in line with price, bringing the P/E ratio down to a more reasonable level. In fact, most valuation metrics are expected to improve and if they don’t, profit taking may lead to an outright sell-off.

However, the BoJ isn’t expected to withdraw its support anytime soon, thus the rally can go on and our bias remains higher in the long-term. Although, we cannot rule-out a correction if global or regional risks taint investor appetite for equites, with the possibility of a Grexit and an equity market rout in China at the forefront of market chatter at the moment. 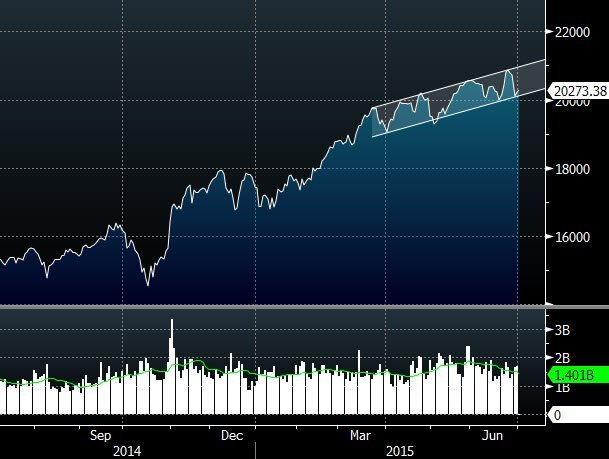