AUDUSD: life in no man’s land

The Australian dollar has been on the front foot lately as investors brush aside some risk-off sentiment from earlier in the week. It seems the market isn’t as concerned about the possibility of a Grexit as initially thought, at least not yet, and the expected negative impact on Australian economy of such an event would be fairly limited. It’s worth noting that the still high yielding Australian dollar is an attractive option for cash leaving the euro, although this has to be weighed against stronger flows to the ultimate safe haven currencies, like the US dollar and yen.

A stronger than expected set of housing numbers from Australia today have also supported the currency in the Asia session, with building approvals jumping 2.4% in May (expected 1.2% m/m), bringing year-on-year growth to an impressive 17.6%. The data may not have a material long-term positive impact on the aussie, but they are helping to establish AUDUSD above 0.7700 in the short-term.

However, our medium-term bias for AUDUSD remains mildly bearish due to the cap that has been placed on the pair by the RBA and the belief that the US dollar will strengthen; a high AUD increases the RBA’s motivation to loosen monetary policy, which is generally a currency negative, hence the cap. That being said, it would likely take a substantial push towards the Australian dollar to have a material impact on the outlook for monetary policy.

From a technical perspective, AUDUSD is in no man’s land at the moment. There’s a lot of weight on the pair, but it still hasn’t been able to break through 0.7500/50. A push through this level may have to come from another potential US dollar rally. This unlikely threat of a US dollar rally and the aforementioned long-term weakness inherent in the aussie may keep AUDUSD broadly pinned below 0.8000. 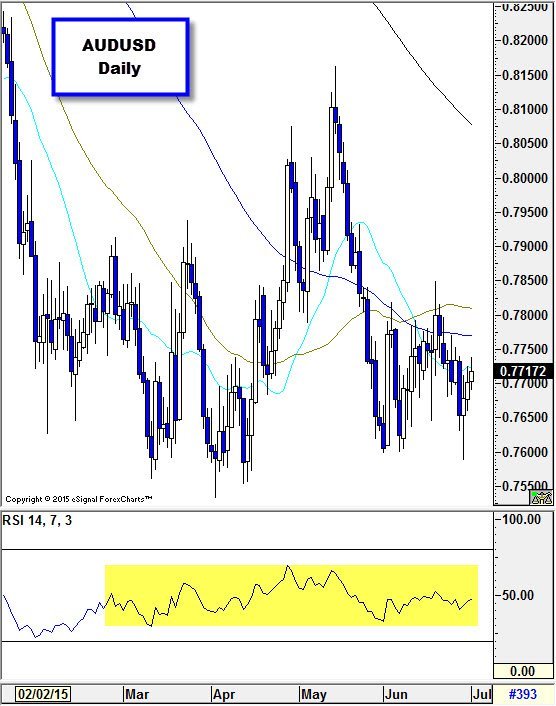