The AUD/NZD has staged a massive rally since bottoming out at just above parity back in April. It has gained some 1350 pips in the process. Most of the gains have been due to a weaker NZD rather than a stronger AUD. The NZD has fallen off a cliff after the Reserve Bank of New Zealand made a U-turn in its policy stance. Worried about the increases in house prices in Auckland in particular, the RBNZ had kept rates high and maintained a hawkish tone. But after the dramatic falls in key commodity prices, the RBNZ could no longer justify maintaining a contractionary policy stance. So, it trimmed interest rates and warned of further cuts in the future.

Unfortunately for New Zealand, the latest Fonterra auction has resulted in the closely-watched GDT price index dropping by an additional 5.9%. Still, the AUD/NZD has not managed to extend its gains noticeably today, possibly because investors are worried about a possible breakdown in the AUD/USD currency pair which is hovering dangerously above the 0.76 handle ahead of some important data out of Australia this week (trade balance on Thursday and retail sales on Friday).

However suggestions that the AUD/NZD’s rally may have ran out of juice are probably a bit premature at this stage. After all, the AUD/NZD has just taken out the key 1.1300 resistance level this week which was also the 2014 high. Thus it has potentially paved the way for further technical buying. It is also worth noting that prior to the breakout, the AUD/NZD had retreated only moderately from the 1.1300 handle last week, which suggests that the bulk of the market participants were still positioned long. This theory could be put to the test if and when price pulls back to 1.1300. If the buyers manage to hold their ground here, price could take another leg higher towards the Fibonacci levels shown on the chart, and potentially beyond over time. The 161.8% extension of last week’s range comes in at just below the 1.14 handle while the 261.8% of the same move is at 1.1560. Meanwhile the 38.2% retracement level of the entire 2011-14 downswing comes in between the abovementioned levels, at 1.1460. These could be the next bullish targets.

As things stand, we remain bullish on this pair for as long as it holds above 1.1300 on a daily closing basis. If however it breaks below this level then we could see a sharp withdrawal of bids over the coming days and weeks. Even then, the AUD/NZD would have to break the 1.1135 support to attract the sellers’ attention. 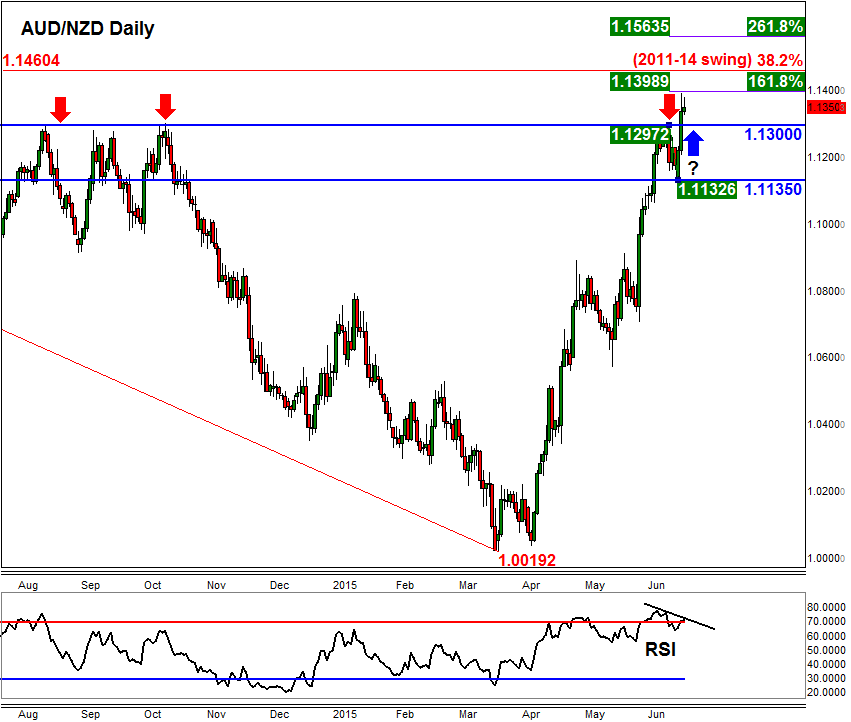