EURAUD: eyes on Greece and then the RBA

It’s been another eventful day for the Australia dollar following the release of softer than expected domestic retail sales numbers. Retail sales increased a measly 0.3% m/m in May, after falling a revised 0.1% in April. The market was expecting sales to have increased 0.5% over the month, thus the aussie sunk on the back of the figures. In fact, AUDUSD was hit very hard, considering the numbers only just missed expectations. However, the Australia dollar may be seeing a delayed reaction to tumbling iron ore prices overnight.

In May, the Reserve bank of Australia (RBA) cut the official cash rate by 25 basis points to 2.00%, citing soft private demand across the economy. A lack of activity at the ground level in Australia is a major problem for the Australia economy; without increased spending the broader economy may continue to grow below trend as spare capacity persists.

Nonetheless, the falling exchange rate will be welcomed by the RBA ahead of its policy meeting on Tuesday. At present, the bank isn’t expected to loosen monetary policy next week, but we are expecting it to leave the open for further policy loosening. Since cutting the cash rate in may the RBA maintained an implicit easing bias at its policy meeting in June, while its board members expressed an explicit easing bias at other times. It’s clear the bank remains in wait-and-see mode with its figure on the policy-trigger.

Time is running out for Athens

One thing the bank will be looking at beyond Australia’s boarders is the situation unfolding in Greece. Athens has announced plans to hold a referendum on Greece’s, now outdated, bailout conditions. If Greece votes No it could me a quick and fairly painful exit from the eurozone or even harsher bailout conditions. A Yes vote would likely keep the door ajar for negotiations to continue and may even see a regime change in Athens, but there still wouldn’t be any guarantee that Greece would receive the funding it needed – the IMF estimates that the struggling nation needs a staggering EUR60bn.

The euro has been very volatile as this situation plays out and with no clear end date for this debacle, the volatility may continue in the near-term. Accordingly, there may be some big moves in the common currency on Monday. A No vote could lead to some panicked selling in the euro as investors flock to the ultimate save haven currency, the US dollar. Meanwhile, a Yes vote may encourage euro bulls, at least in the short-term.

While the Australian dollar is a somewhat attractive option for money leaving the eurozone, it’s still a risky proposition, especially with the RBA’s policy meeting on Tuesday, the release of Australian employment data on Thursday and the turmoil in Chinese equity markets. In fact, this may add to a potential rally in EURAUD if Greece votes Yes on Sunday. 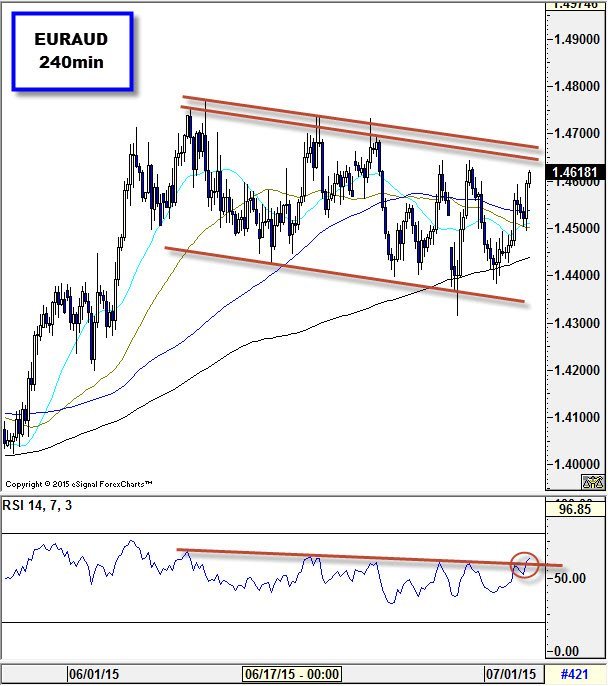