Crude prices fell dramatically on Wednesday with WTI taking the brunt of the sell-off as it plunged more than 4% following the publication of the latest Energy Information Administration’s (EIA) oil inventories data which showed a surprise build of 2.4 million barrels. This was the first build in stockpiles since the end of April, ending a run of 8 weekly declines. Yesterday morning, oil prices were initially higher as traders took advantage of quieter market conditions to book some profit on their short positions that had been opened earlier this week. This must have been the reason for there was no other clear catalyst to have supported prices, apart from a slightly weaker dollar in response to the disappointing US jobs report. Indeed, as it turned out the rebound was short-lived as prices started to head south once more as the session wore on. Preventing WTI prices from an even sharper decline is the fact that the EIA’s report also showed that crude processing was quite high as gasoline stocks fell by 1.8 million barrels. Clearly demand for gasoline is higher thanks to the weaker prices and as we are in the midst of the US driving season. Gasoline demand will likely increase even further this week due to the Independence Day long holiday weekend. Meanwhile, preventing Brent from tumbling even more profoundly has been the delay in the deadline in Iranian nuclear talks. An agreement is still likely to be reached in the coming weeks that will probably allow Iran to produce more oil. In other words, the supply of OPEC oil is still likely to increase even further, which may ultimately weigh on prices for the foreseeable future.

Indeed, both oil contracts appear to be on the verge of a breakdown, though the fourth of July holiday in the US may prevent prices from moving too sharply today. As can be seen from the chart, the WTI contract is currently testing the low from March at $56.50. If the bears are successful in breaking this level down, then there are not much immediate supports below this level until the 38.2% Fibonacci retracement at $54.70 and then the prior key resistance at $54.00. Thus, a decisive break below the $56.50 could see prices drop sharply over the coming days. The bullish trend line has already been broken and price has also taken out some important supports such as $59.55 and $58.00, levels which have since turned into resistance. Likewise, the Brent contract has eroded its own bullish trend line. The London-based oil contract is now heading towards horizontal support around $61.30, a break below which could see prices drop towards the psychological $60.00 mark, and potentially beyond over time. The near-term bearish setup would become invalid for oil if Brent closes back above $63.00 and WTI above $58.00. 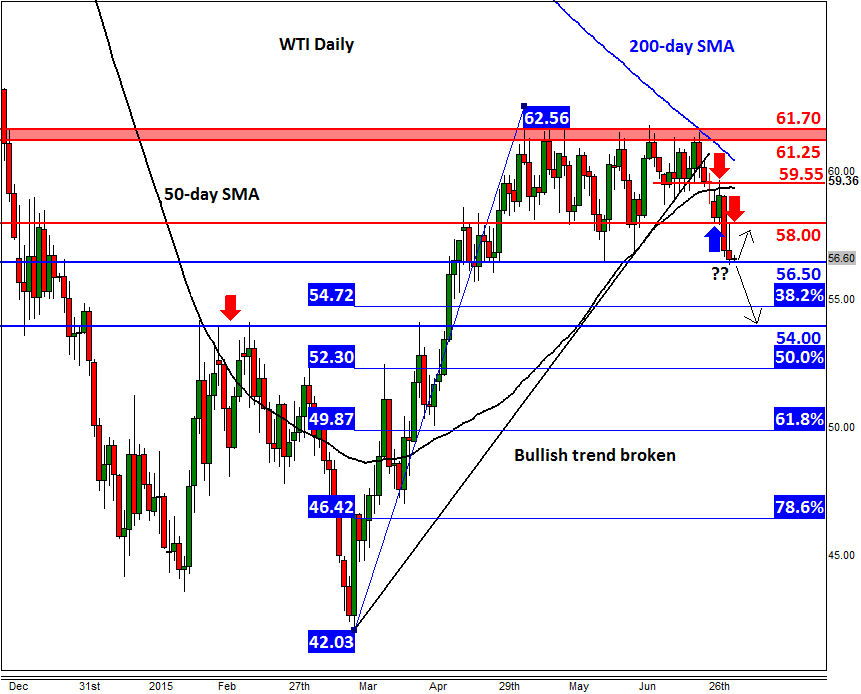 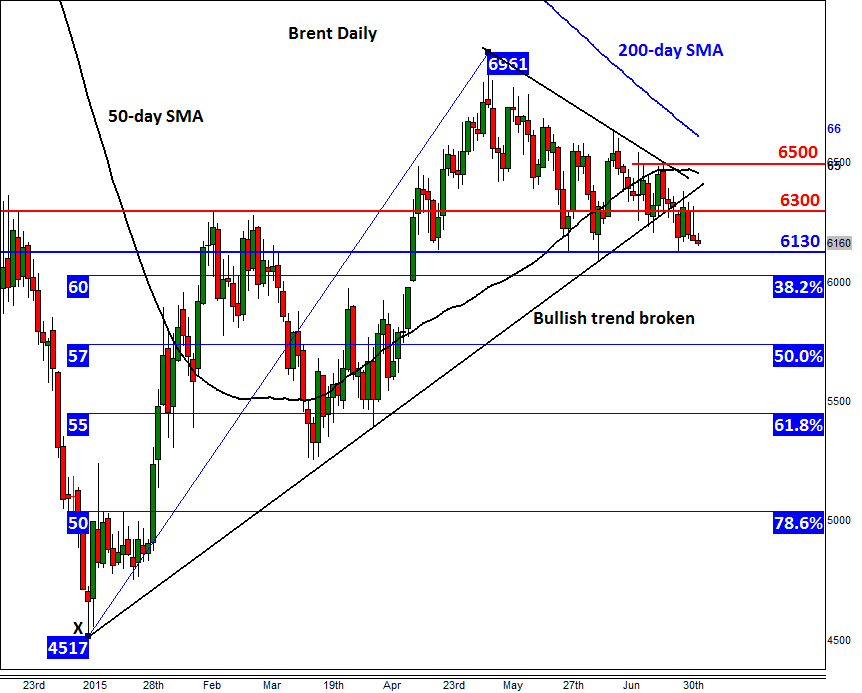