Some market participants may be surprised about the resilience of the markets given the increased uncertainty about Greece in light of the weekend’s Greece referendum outcome. But a quick look at the charts reveal that stocks remain significantly lower than where they had closed on Friday of the prior week when the referendum was first announced, and they are also still below the close of last Friday’s levels. In other words, some of the bad news had already been priced in last week so the hesitation at the start of this week is somewhat understandable. Indeed, this is the sort of a reaction we saw last Monday when a period of stability followed the initial knee-jerk reaction, before volatility increased again as the week wore on. Bearish speculators who had anticipated a marked move lower in stocks, and those who have been surprised by this outcome, must be taking some profit on their positions, knowing full well the market’s tendency to ‘fill’ the gaps. This is probably causing the markets to recover today – just like it did last Monday. On top of this, China has intervened in its financial markets and we wouldn’t be surprised if the likes of the SNB were at it again as far the Swiss franc is concerned. These factors may also be helping to support the markets – for now anyway.  What’s more, news that Greece’s Finance Minister Varoufakis has quit may have given rise to expectations that future negations will be more constructive between the Greek and EU officials, increasing the odds that a deal will be reached soon – potentially as early as this week.

Indeed, it is probably the result of profit-taking which has lifted the German index to back above 10900 from its earlier lows, filling most of the weekend gap like last Monday. But last Monday, the DAX and other European stocks failed to completely fill their voids. Will we see a similar pattern this week? Meanwhile, the EUR/USD has 'filled' its own gap after climbing to 1.1095 earlier. Last Monday the world’s most heavily traded currency pair had more than filled the weekend gap before falling back sharply. Similarly, the EUR/JPY and AUD/JPY filled their voids last week before retreating sharply once more. Thus the markets are not out of the woods just yet and may still fall to fresh lows as the week progresses.

But as before, the path of least resistance for the major European stock indices remains to the downside. As far as the DAX is concerned, the German benchmark stock index continues to drift inside its bearish channel. Though, as mentioned, it gapped lower at the open, thereby taking out the key support around the 10855-10900 range, the index has now bounced significantly off its lows and is trading above here. But if the index ends the day back below the 10855-10900 range, or takes out this key area of support in one of the upcoming sessions, then we could see some follow-up technical selling later this week. Below here, the next potential support could be the 200-day moving average at 10650 followed by the 127.2% Fibonacci extension level of the intra-month upswing in June, at 10570. The support trend of the bearish channel also comes into play here, making it a key support area.

However there is one caveat. If in light of the Greek vote and news of Finance Minister Varoufakis quitting, the EU and IMF now hands out an improved bailout offer to Greece and one which it accepts, then stocks could rally significantly from these depressed levels.  In this scenario, the two gaps left behind in the last couple of weeks may get filled after all. In addition to the gaps, traders will need to pay close attention to the resistance levels shown on the chart at 11115, 11200 and 11290. Ahead of these levels is the low from Friday at 11,005, which may turn into resistance upon re-test. 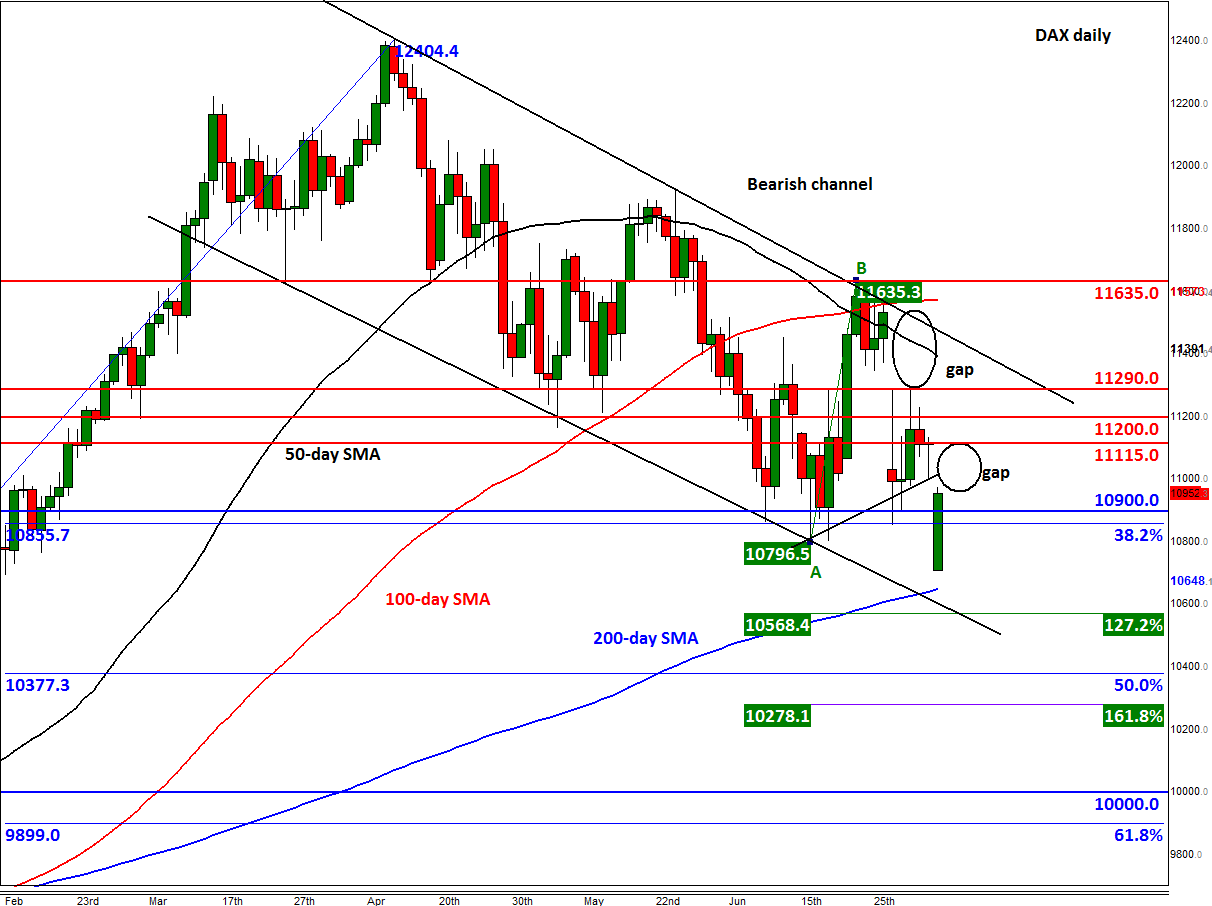