Gold: It’s Groundhog Day All Over Again for Frustrated Bulls

Last week, we analyzed the (lack of) safe haven demand for gold in the wake of Greece’s deteriorating debt negotiations, noting that “the yellow metal …[was] dramatically lagging its safe-haven rivals” and that “this week’s lackluster reaction suggests that gold may be losing its luster and on the verge of a big breakdown” (see “Gold: Safe Haven No More?”). Gold subsequently dropped to a new nearly 4-month low at 1156 on Thursday before recovering slightly into the weekend.

As we open another week of trade, it feels a bit like the 1993 movie “Groundhog Day,” where Bill Murray inexplicably get caught in a time loop and is forced to relive the same day over and over again. Much like in that iconic movie, this week’s moves in gold closely mirror last week’s: the yellow metal gapped slightly higher to start this week after an ostensibly negative development in Greece’s debt negotiations. However, the small bullish gap has already been filled and gold is once again trading below Friday’s open. Gold’s failure to retain any sort of safe-haven bid despite increasing global economic uncertainty represents a strong bearish signal moving forward.

From a technical perspective, gold is working on a potential Bearish Engulfing Candle* on the daily chart, signaling a big shift to selling pressure. Unless we see a rally during today’s US session, this candlestick pattern will suggest a possible continuation down toward last week’s low in the mid-1150s.

The medium-term picture is a bit more constructive, with gold’s RSI indicator still holding within its sideways range and the price of the metal itself forming a falling wedge pattern; despite its ominous-sounding name, this pattern could actually lead to a rally if gold is able to overcome the upper trend line near 1190. For now though, the near-term bias in gold remains lower, with strong support sitting at the year-to-date lows near 1140. 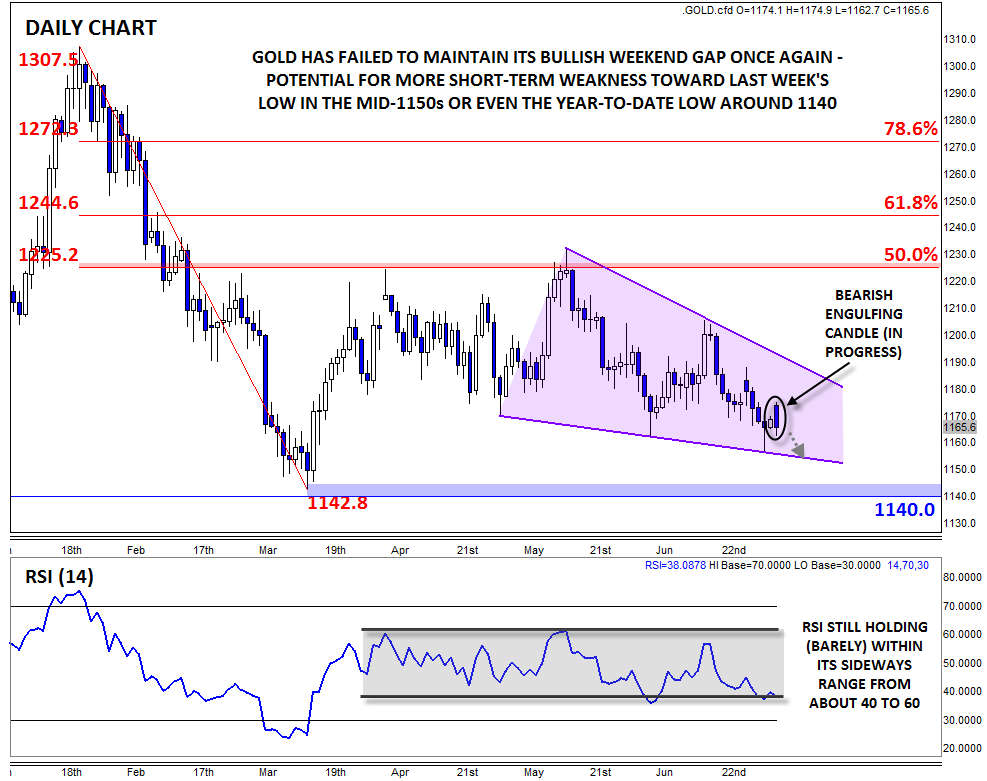