In last week’s EM Rundown we explored which EM currencies were most vulnerable to a potential Grexit, and while a Greek exit from the Eurozone looks more likely than ever, there is a much bigger risk for EM FX emanating from China, whose economy is roughly 40 times larger than that of Greece.

Over the weekend, China intensified its efforts to bolster confidence in its equity market, which has fallen a staggering 30% in just the last three weeks alone. Specifically, the Chinese government suspended IPO and relaxed requirements on margin loans; the People’s Bank of China (PBOC) announced that it would work to inject funds into brokerage firms; and China’s brokerage firms pledged to invest 120bn yuan ($19bn) into the Shanghai Composite Index as long as it remained below 4,500 (currently trading at 3,775).

This coordinated “throw-everything-including-the-kitchen-sink-at-the-market” strategy reveals the government’s deep concern that the stock market collapse could spread throughout the rest of the economy, including into the frothy real estate market. Though bold, these measures may not be enough to stem the equity traders’ panic-driven selling stampede: even this morning’s big 8% bullish gap faded throughout the day, with the index closing just 2.4% higher from Friday. If this latest round of measures is unable to stabilize sentiment, the resulting financial carnage could spill over to other regional economies and impact global risk sentiment on the whole.

Among the major emerging markets, the countries with the highest proportion of exports to China are Russia (8.1% of total exports), South Africa (8.3%) and Singapore (14%). Not surprisingly, USDRUB, USDZAR, and USDSGD are all trading higher on the day. USDRUB in particular looks bullish from a technical perspective, with rates approaching the 3-month high around 57.00 after breaking out from a bullish flag pattern. With the MACD trending higher above its signal line and the “0” level and the RSI indicator not yet overbought, a continuation toward the 57.00-58.00 area could easily be in play this week. Meanwhile, only a break below last week’s low at 54.40 would bring the near-term bullish bias into question. 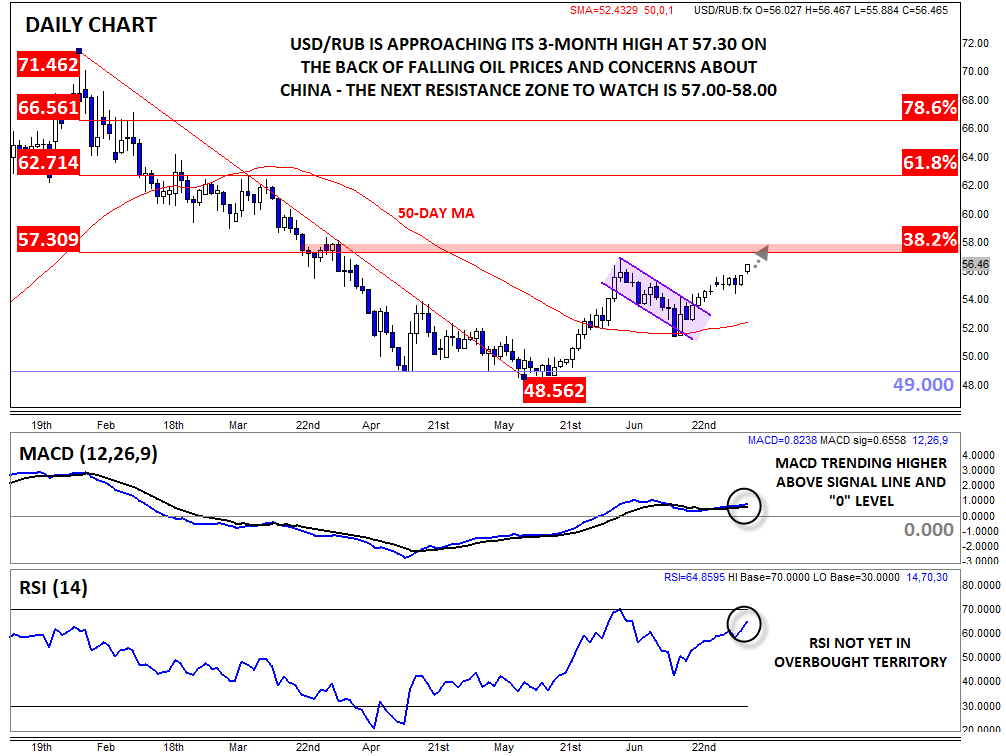