EUR/USD on the verge as new Greek proposals awaited

The EUR/USD is again sharply lower today as investors await fresh news from Greece. Following the weekend’s referendum which resulted in an emphatic “No” to the bailout offer from the trioka and the subsequent resignation of the outspoken Greek finance minister Yanis Varoufakis, the focus is now on Prime Minister Alexis Tsipras to present a new package of reforms to the euro zone leaders later today. If a deal is finally reached this week, it is likely that the EUR/USD’s initial reaction will be a positive one. Thus, any positive headlines regarding Greece leading up to a potential deal could support the euro. But once the initial euphoria fades, the EUR/USD may then resume its long term downward trend as investors focus back on the fundamentals and realise that the interest rate differential between the US and Eurozone is growing. Also, the single currency had been supported by the unwinding of the long equity and bond positions lately, and the corresponding rise in benchmark government yields. But yields have fallen back in recent days and if Greece is “saved”, it is likely that they would fall even further and stocks rally. Consequently, the EUR/USD may head south as the spread between US and euro zone yields widen. But if the unthinkable happens and Greece exits the euro zone, this too will be bad news for the EUR/USD. Thus, I think that the outlook for the EUR/USD is looking bearish from whichever angle you look at it.

Indeed even from a technical point of view, the EUR/USD appears to be on the verge of a breakdown. Yesterday, the worlds’ most heavily-traded FX pair gapped lower as traders responded to the weekend’s “No” vote in Greece. It spent the rest of the day ‘filling’ that gap before running into fresh selling pressure once it reached Friday’s closing level of 1.1095. From there it has pulled back quite sharply and this morning it momentarily dropped below yesterday’s low. But things could go from bad to worse if the EUR/USD goes on to break below last week’s low too, at around 1.0950/5. It is likely that a cluster of stop loss orders are sitting below this level. If they get triggered, we may well see a sharp move to the downside. Indeed, the next key support is all the way down at 1.0845, a level which corresponds with the 61.8% Fibonacci retracement of the up move from the March base. What’s more, price has already broken a bullish trend line and the momentum indicator MACD has created a bearish crossover and is below the “zero” level. But with the above-mentioned fundamentals working against the bulls, we wouldn’t be surprised if the euro went much lower over time. On the upside, the key resistance to watch is yesterday’s high at 1.1095. This level also corresponds with a short-term bearish trend line. For as long as price holds below here, the short-term bias would remain bearish. 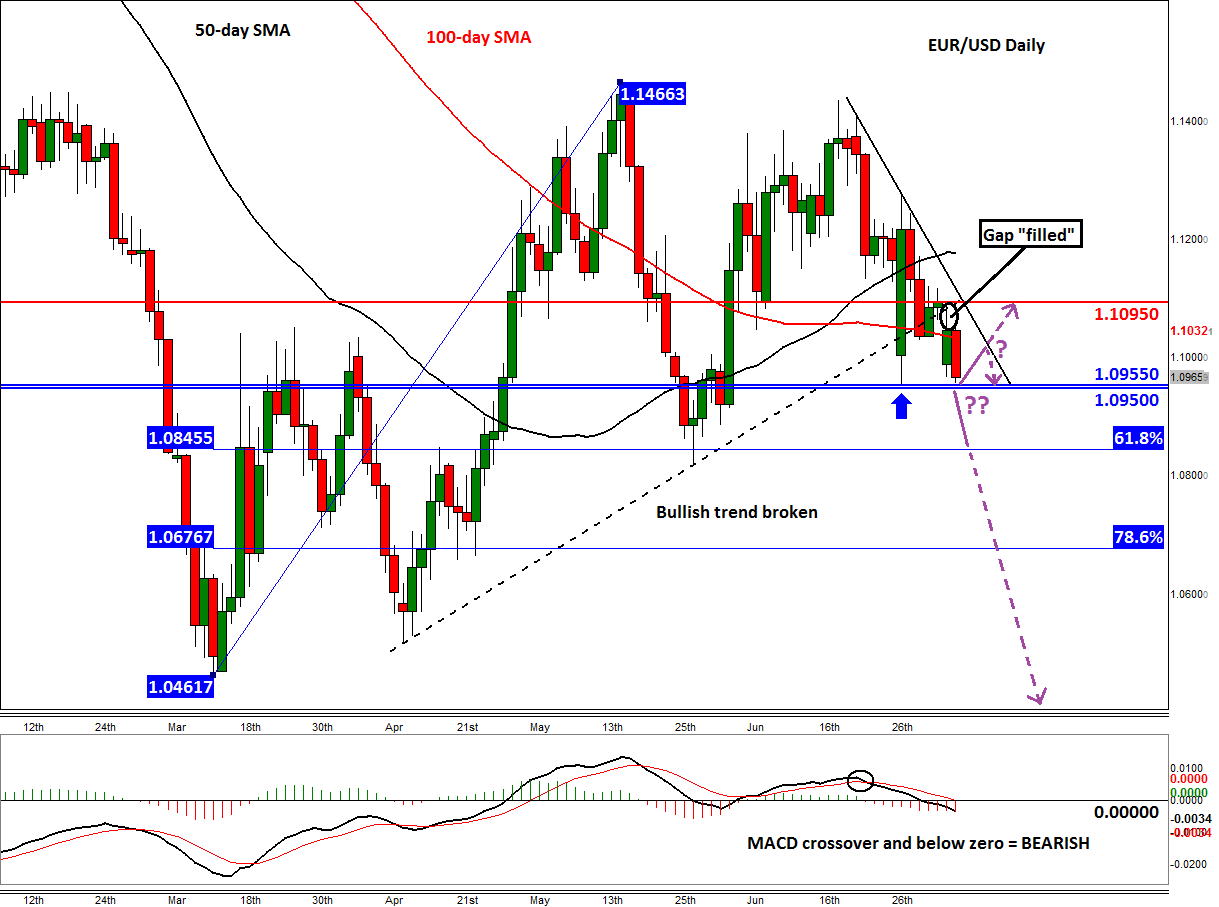