DAX jumps on optimism over Greece and China, technical buying

European stock markets are continuing to push higher as we approach the mid-session. Investors are relieved that China’s attempts at halting the market turmoil there has finally worked – at least for now, anyway – as the Shanghai Composite closed up 5.75% overnight.  In addition, optimism about the prospects of a Greek deal is growing as Prime Minister Alexis Tsipras is due to submit ‘credible’ reform proposals to the EU later. In the US, index futures are also pointing to a higher open on Wall Street  as the second quarter earnings season unofficially got underway last night after Alcoa reported its numbers. US investors may wait to see the results of a few company earnings before deciding on what to do with their long equity positions, which could be another factor helping to stabilise the markets. Meanwhile minutes from the FOMC’s last policy meeting yesterday contained very little in the way of new information other than what we already knew. However, as some FOMC members are concerned about the developments in China and Greece, the Fed may after all wait until the start of 2016 before hiking interest rates. The prospects of rates remaining low for slightly longer than expected is further good news for the stocks markets, and potentially bad for the dollar.

Like China’s Shanghai Composite and the S&P 500 in the US, Germany’s DAX has found strong support from its own 200-day moving average. This particular moving average is closely-watched and it is thought that some money managers and hedge funds have specific rules that prevent them from buying markets which trade below these averages. Others, particularly those that believe in the theory of mean reversion, have strategies that specifically require them to buy at or around the 200-day average. It is therefore encouraging to see these indices finding some much-needed strength at these levels. BUT it remains to be seen whether this bounce is indeed driven by strong buying pressure or merely short covering.

In the case of the DAX, the German index has also completed an AB=CD move. Point D of this move has been established at just below the 161.8% Fibonacci level of the BC swing at 10690. This Fibonacci exhaustion point is not too far below the long term 38.2% Fibonacci retracement level of the upswing from the October low, at 10855. The latter represents a relatively shallow retracement in the long-term bull trend and if the index were to find a clear base here, then the next move higher could potentially be explosive as it would suggest that the bulk of the market participants are still positioned long or at least hold a bullish view. Meanwhile the momentum indicator RSI has formed a clear bullish divergence with the index: it has made a higher low.

Thus, if the 200-day average support holds firm, as it is for the time being, a potential rally could be on the way, particularly as there are also a couple of market gaps that have yet to be “filled.”  The first such void is above the resistance level of 10995 and the second is above 11295. We could therefore see the DAX rally all the way to the upper trend of its bearish channel, particularly if we hear some good news regarding Greece.  The bear channel would turn into a long-term bull flag if the DAX eventually breaks out to the upside. If seen, this would be a very bullish outcome.

However, if the bounce from these levels fails to inspire a buying frenzy in the coming days then we could be in for a much larger correction. Indeed, if the DAX and co. break decisively below their 200-day averages, we could see further withdrawal of long positions from the group of market participants discussed above, which could exacerbate the sell-off. In this case, the DAX could easily drop to 10,000 or lower before deciding on its next move. 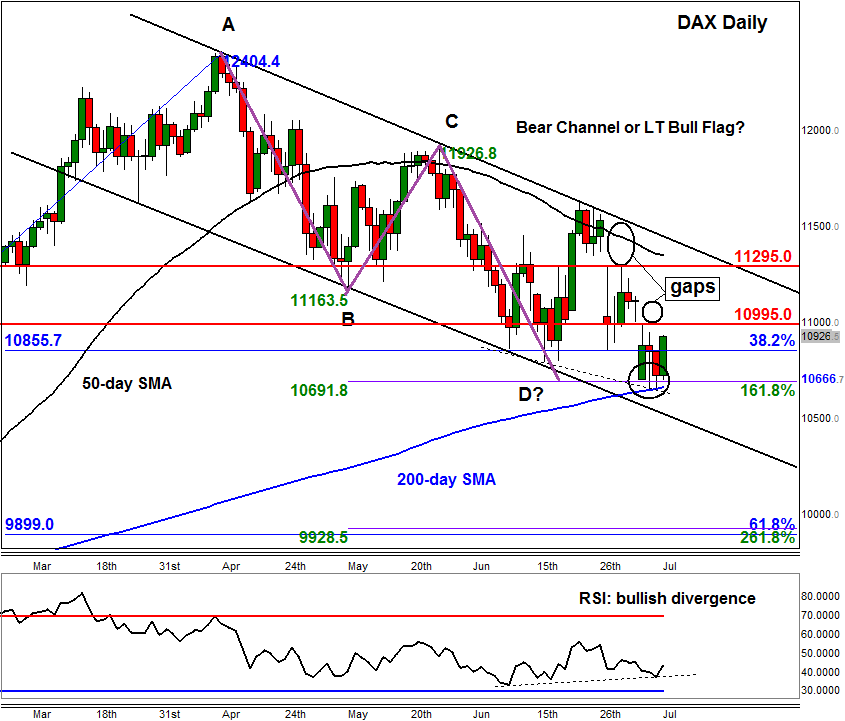