USD/JPY: where to next?

The appetite for risk has improved noticeably today, as evidenced by a sharp rebound across the global equity markets. FX traders have likewise witnessed the unwinding of some safe haven trades with CHF and JPY both falling sharply following their recent gains. The US dollar has performed well given the fact that the weekly unemployment claims disappointed expectations and after the minutes from the FOMC’s last policy meeting, released yesterday, contained very little in the way of new information other than what we already knew. However, as some FOMC members are concerned about the developments in China and Greece, the Fed may after all wait until the start of 2016 before hiking interest rates. The prospects of rates remaining low for slightly longer than expected could potentially be bad for the dollar. But so far the market seems happy to remain long the world’s reserve currency, as the other major central banks are nowhere near as hawkish as the Federal Reserve.

But the strong uptrend for the USD could end in the short term, especially against the yen. As can be seen from the chart, the USD/JPY broke below key support at 121.85/122.00 yesterday which led to a sharp sell-off as the longs rushed for the exits.  But so far the bulls have managed to defend the rising trend line around 120.50 successfully. While this holds, the possibility for a rally back towards the aforementioned broken support at 121.85/122.00 is highly likely. But if this area then turns into resistance, price may go on to break the bullish trend line before heading further lower. The next level of support could be the psychologically-important 120.00 handle. Thereafter are the 61.8% Fibonacci retracement at 119.50 and then the 200-day SMA at 118.55. If however the USD/JPY breaks back above 121.85/122.00 on a closing basis then that would invalidate this potentially bearish scenario. 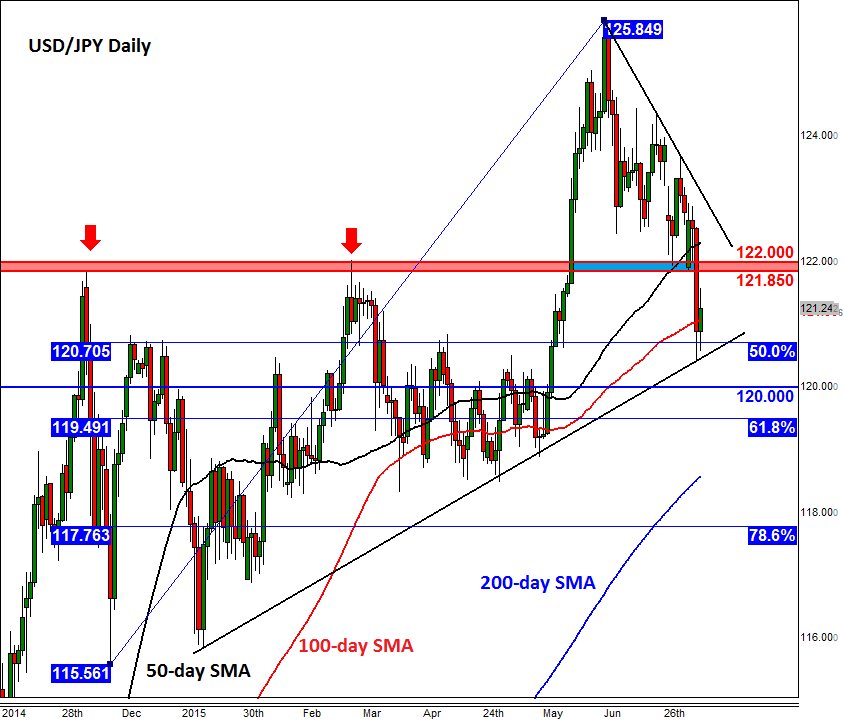