USDJPY secures its footing above 120.00, at least for now

Earlier in the week, the yen was the currency of choice for investors looking for a safe harbour. A reversal of risk appetite over the last couple of days has seen a push back towards risk currencies and away from the yen. USDJPY is now back above 122.00, after bouncing off support around 120.50 on Wednesday night.

The uptick in investor sentiment can be attributed to a quick government-led reversal of fortunes for Chinese equities and renewed hope that Greece will come to a deal to secure another bailout from its creditors. The Shanghai and Shenzhen exchanges are up around 6.4% and 4.2% respectively at the time of writing, marking the biggest two-day rally in the former since 2008. Meanwhile, there was news from Europe this morning that Greece has submitted a bailout bill which is expected to be more in-line with creditors demands; it amounts to a minimum of 53.5bn euros. However, if this new plan is rejected on Sunday EU leaders may begin preparing for a Grexit, which may push investors back into risk-off mode.

The sell-off of the yen has pushed USDJPY through an important support, turned resistance zone (see chart) and resulted in a bullish crossover in MACD. Price is now testing its 50% Fib. retracement level from this month’s high, just above 122.00; a break could open up a push towards 122.50 – 61.8% retracement level. On the downside, the aforementioned support, turned resistance zone remains important, although 120.00 will likely be the true test for bears if price reaches that far. 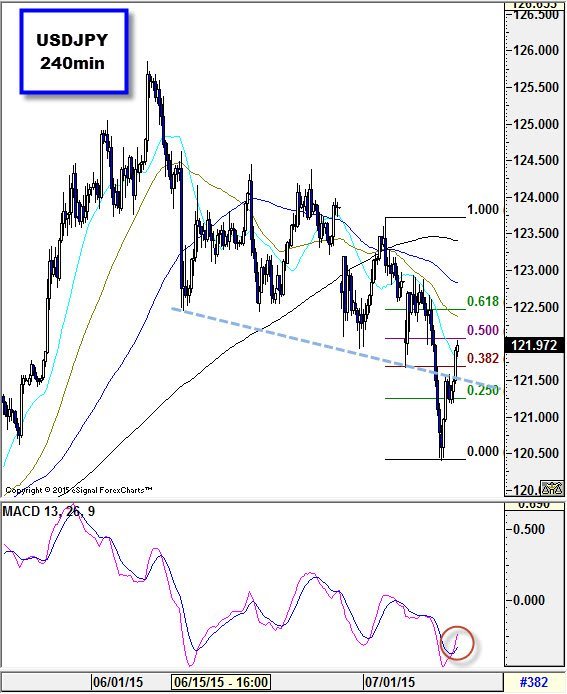