AUDJPY prepares for a big week!

It has been another eventful morning in Asia after another weekend dominated by the prospect of a Grexit. After last weekend’s referendum, Germany is now taking a hard-line stance with respect to a fresh bailout for Greece. German Chancellor Merkel noted before Sunday’s summit of European leaders that “the most important currency has been lost, and that is trust”. Along with some other eurozone members, Germany is questioning whether Athens can be trusted to implement the reforms promised in exchange for another bailout. Tsipras has now been given three days to past these unpopular reforms through Greek parliament before negotiations can begin. The hard stance taken by EU leaders resulted in another move towards the safe haven yen and away from risky currencies like the aussie, although it was less pronounced this time around.

Outside of Europe, there’s a lot on the ticket this week which could influence both the yen and Australian dollar. Not only is there a policy meeting in Japan later this week, there’s also a slew of important economic data out of China to go along with the volatile conditions in its stock markets. In this kind of toxic environment, the ultimate risk-proxy, AUDJPY, is looking a little shaky.

Events and data to watch:

Last week AUDJPY was sent to its lowest level in over a year as the demand for the yen’s safe haven status intensified. However, the pair was able to regain some of this lost ground later in the week as fears of a Grexit took a back seat to China’s stock markets regaining some composure. The reversal in price happened around its 31.8% Fib retracement level, before the pair dropped lower at the open this morning. From here, we may see price sample life below 90.00 once more… 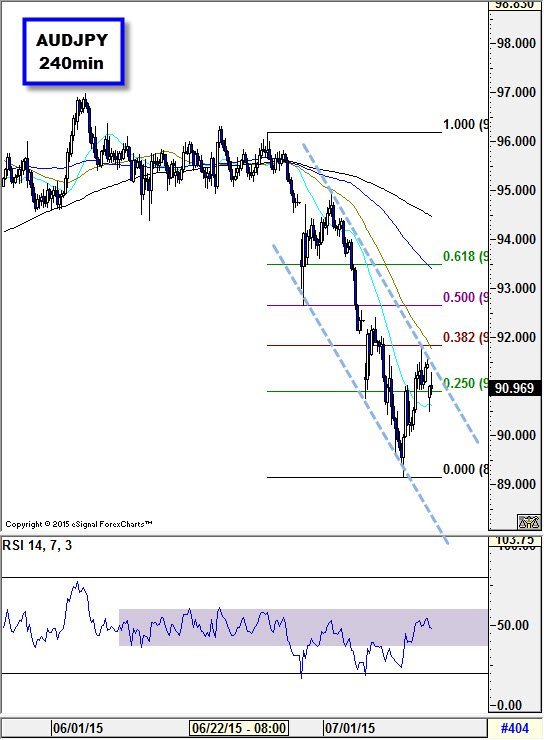