So, after marathon talks, Greece has finally reached an agreement with its international creditors for a bailout in exchange for some tough reforms. There is still some works that needs to be done as both the Greek and German parliaments will have to vote on the measures, but the general feeling is that they will pass without major problems. As one would have expected, stocks have responded positively to Greek news, with European indices climbing more than 1% and US index futures also rising modestly and point to a firmer open on Wall Street.

However it remains to be seen whether the Greek news will inspire a sustained rally in the equity markets. Indeed, it is not just the crisis in Greece which has weighed on risk sentiment recently. The stock market turmoil in China, the dollar’s strength and concerns about a premature lift off of rates in the US have been among the other factors. With regards to China, although the Shanghai Composite has managed to make back a big chunk of the losses suffered in recent times, the situation there remains quite uncertain. Though the June trade figures released overnight were better than expected, imports fell sharply once again, this time by 6.1% year-over-year following a 17.6% plunge in May. The key Chinese data will be released on Wednesday: second quarter GDP estimate and the latest industrial production figure. If these numbers deviate significantly from expectations then we could see some further volatility in Chinese stocks which could impact the sentiment across the globe. In the US, investors are probably waiting to see the results of some company earnings before deciding on what to do with their long equity holdings. The second quarter reporting season has already started and will kick into a higher gear this week. The key earnings for this week are as follows:

With regards to earnings, a lot has rightly been said about the impact of the stronger dollar hurting the bottom line. We will soon find out if this was indeed the case in the second quarter and if so what the damage was. As well as safe haven demand, the dollar has been supported by expectations about the Federal Reserve becoming the first major central bank to hike interest rates. Not a long time ago, the Fed was expected to start raising rates in June. Then expectations were pushed out slightly for a September hike and then to December. But now the calls are growing to hold off until early 2016, most prominently from the IMF. The minutes from the FOMC’s last policy meeting, released last week, contained very little in the way of new information. However, as some FOMC members were concerned about the developments in China and Greece, the market’s interpretation of the minutes were that the Fed may indeed hold off until 2016. But now that risks of a Grexit have been reduced and the Chinese markets have been stabilised, the Fed may after all increase rates at the end of the year. In fact, the Fed Chair Janet Yellen has again said that she still expects “that it will be appropriate at some point later this year to take the first step to raise the federal-funds rate and thus begin normalizing monetary policy.” The prospects of rates rising slightly sooner than expected could potentially be bad for US equities.

Some of the key US indices such as the Dow and the S&P 500 have found some technical support from their respective 200-day moving averages. This particular moving average is closely-watched and it is thought that some money managers and hedge funds have specific rules that prevent them from buying markets which trade below these averages. Others, particularly those that believe in the theory of mean reversion, have strategies that require them to buy at or around the 200-day average. It is therefore encouraging to see these indices finding some much-needed strength at these levels. BUT it remains to be seen whether this bounce is indeed driven by strong buying pressure or merely short covering.

If the 200-day average support holds firm, as they are now, a potential rally could be on the way, particularly as there is also a gap in the S&P that has yet to be “filled.” The future is currently trading around 2091, thus testing the prior resistance. A break above here may see the void get filled completely, leading to a rally to 2100 where the 50-day moving average meets the 61.8% Fibonacci retracement level. It will be then interesting to see what the index will do around 2100, should it get there. A closing break above this key level may pave the way for an eventual move towards the prior all time high at 2137. In contrast, if the S&P heads back below the moving average and breaks the 2045 key support then a sharp sell-off could get underway next week, with the 38.2% Fibonacci retracement of the upswing from October, at 2015, being the immediate bearish target. 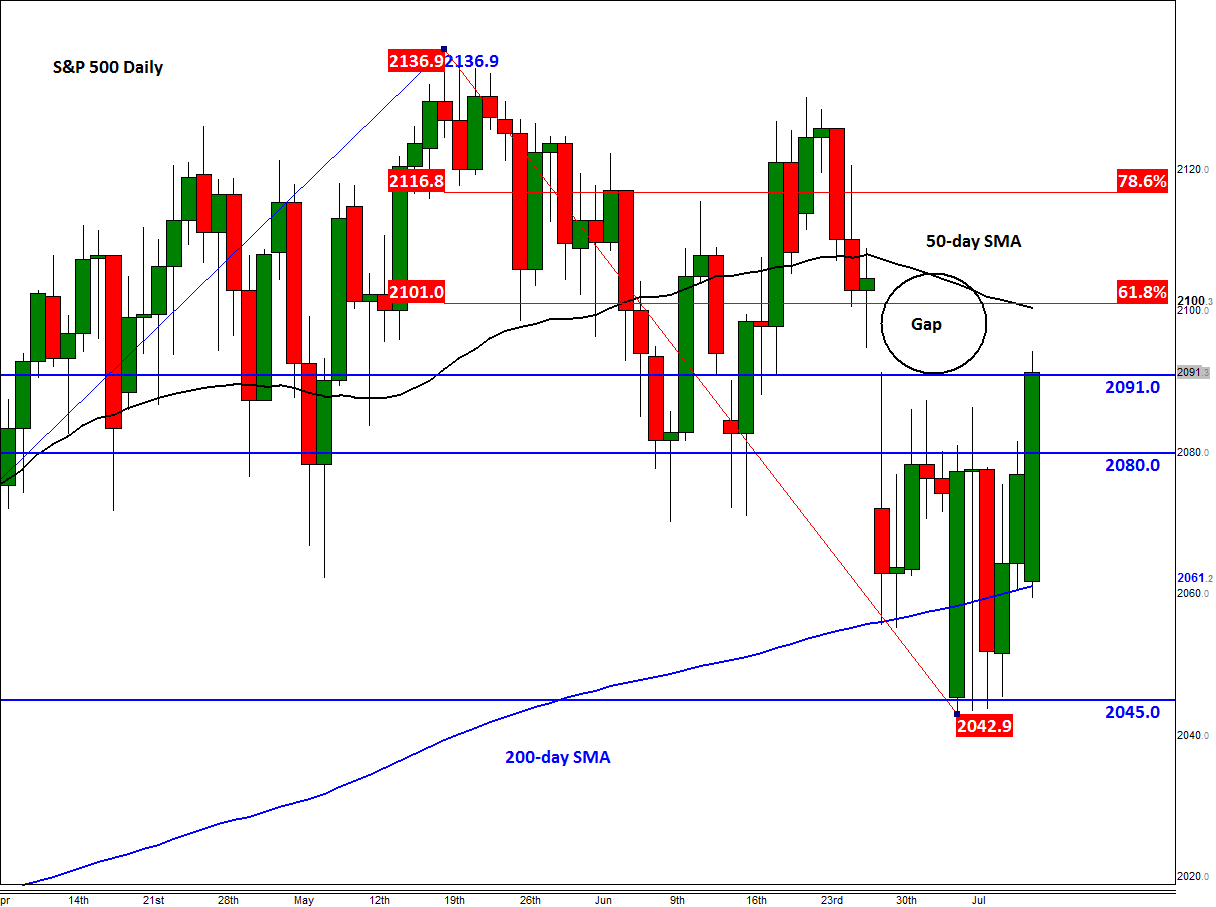