EURAUD is looking a little nervous in the near-term

The euro was assaulted by sellers overnight, despite a last-ditch bailout deal for Greece. EURUSD even dropped through 1.1000 early in the Asia session, after briefly touching 1.1200 overnight. It’s true that PM Tsipras still has to pass this deal through Greek parliament, but it seems he’ll have enough support, although he’ll likely have to look on the other side of the bench. Nonetheless, the euro has been on the back foot throughout the last few sessions as investors begin to refocus on an expected further divergence of the monetary policies of the ECB and the Fed, with the latter expected to begin hiking interest rates as soon as later this year.

Meanwhile, the Australian dollar has also been subjected to widespread selling in the face of a deteriorating monetary policy outlook. It has also been dragged lower by a softening outlook for China, falling key commodity prices and other factors, making it one of the worst performing major currencies. This sell-off has been so severe that the Australian dollar has finally corrected to around its fair value against the US dollar; our bias remains lower for AUDUSD but there may be an opportunity for EURAUD bears.

There are clear fundamental weaknesses for both the aussie and euro, but the latter is more exposed in the short-term in our opinion. This view is being supported by strong Australian business confidence data for June, with NAB’s Business Confidence Index rising to 10 last month from 7 in the prior month, and a recovery in China’s equity markets – it’s worth noting that the release of China’s Q2 GDP numbers tomorrow will be a key event for the commodity-backed aussie (exp. 6.8% y/y).

From a technical perspective, EURAUD is looking a little weak in the near-term after bouncing off the top of its long-term upward channel just above 1.5000. In fact, some techs suggest that price may head towards the bottom of this channel (see chart); a break of which could see price test a support zone just below 1.4500. 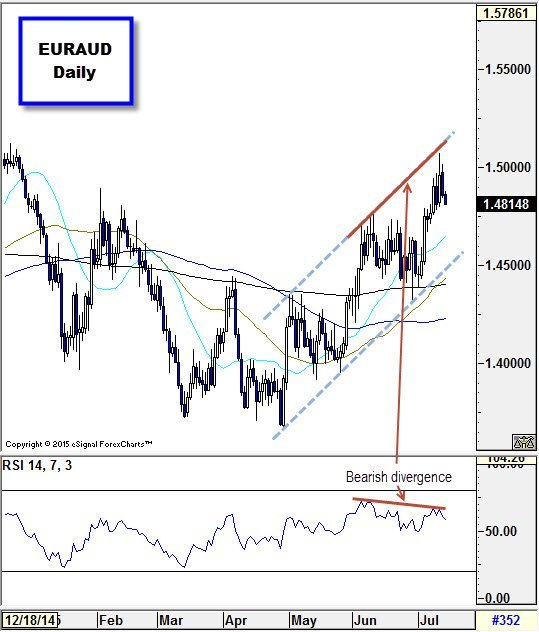