The big news today is undoubtedly the historic agreement between Iran and global powers on limiting Tehran’s nuclear activity in return for the lifting of economic sanctions, including oil exports and access to international finance. Crude prices are unsurprisingly lower on the back of this, though it remains to be seen how much lower they can fall in the very short term given that at least some of the news was already priced in. So, there is a chance that oil prices may actually rise from these oversold levels. Indeed, the full implementation of the agreement is likely to take several months. What happens next is that US President Barrack Obama will need to submit the accord to the US Congress for approval. This could take a long time and there is a small risk that it won’t be approved. The easing of sanctions is also dependent on the pace at which Iran achieves its own responsibilities. But if it all goes to plan, then Iran could eventually boost its output by up to 1 million barrels of oil per day, approximately in about 6 months’ time. Make no mistake about it; this would be a huge amount of oil flooding an already-saturated market and it is difficult to see which OPEC members will compensate for it by reducing their own output. Thus, there is a big risk that the global oil surplus could increase further in the latter parts of this year which would obviously be bad for oil prices if there is no corresponding increase in demand.

The oil market’s focus will remain predominately on the supply side of the equation with US crude inventories data from the American Petroleum Institute (API) due for release tonight and then the Energy Information Administration’s (EIA) numbers tomorrow.  But some will also turn their attention to the demand outlook for oil as there will be plenty of global macroeconomic data to ponder upon this week. Of particular interest will be the Chinese numbers on Wednesday, which include industrial production and GDP. If these figures point to further weakness in the world’s second largest economy and oil consumer then crude prices could fall sharply. Thus, oil traders could be in for another wild ride this week.

From a technical point of view, the levels for crude oil are clearly established. WTI has failed to even test $54.00 which was previously a strong resistance level, so the path of least resistance is clearly to the downside. But should the oil bulls manage to reclaim this handle then there is nothing much until the 100-day SMA around $55.00. Thereafter is the point of the origin of the breakout at $56.50. As before, the key support is at around $50. As well as a psychologically-important point, this level marks the 61.8% Fibonacci retracement of the upswing from the March low. But given the manner in which oil has sold off (i.e. aggressively), we wouldn’t be surprised if WTI goes on to even revisit the March low at $42.00 at some point down the line. For Brent, the key resistance levels to watch are at $60 and then at $61.30. The latter corresponds with the point of origin of the breakout. The key support area is between $54.50 and $55. This is where the psychological $55 level meets the 61.8% Fibonacci retracement of the upswing from March. If decisively broken, the next stop for Brent could be at $50.00. 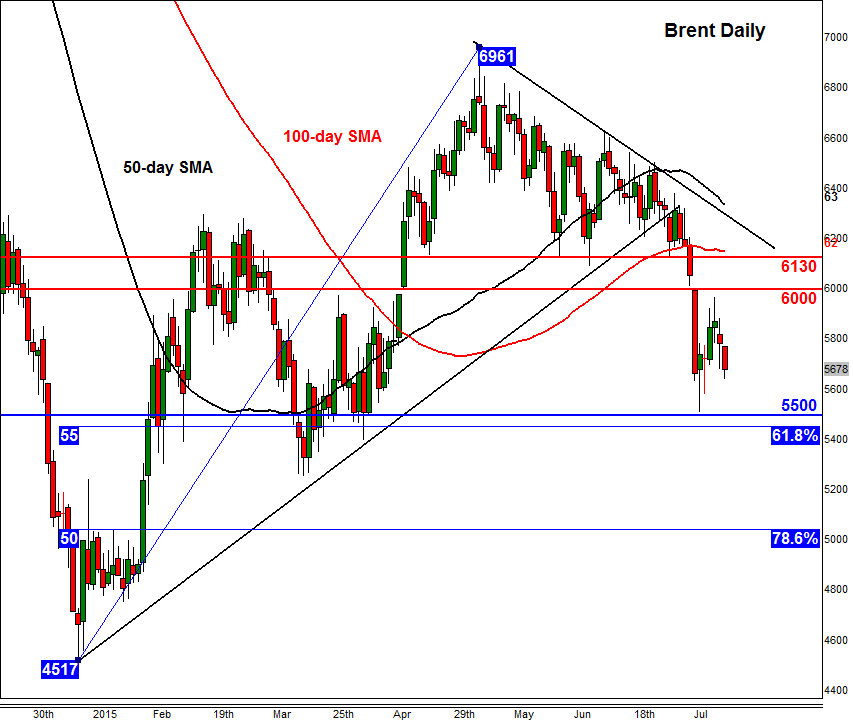 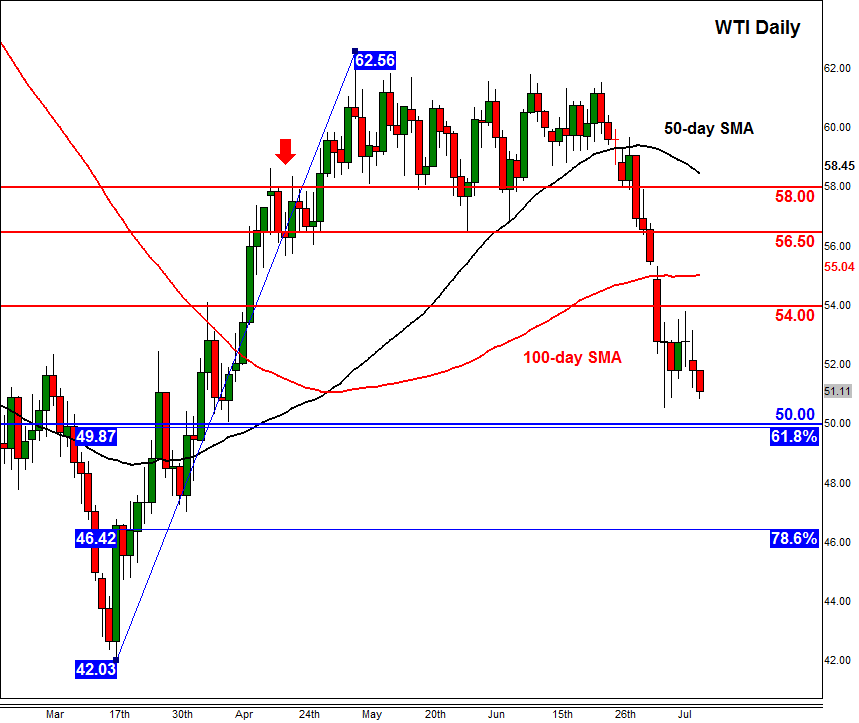