It’s been an action-packed morning for USDCAD traders, and the excitement is likely to carry over for at least the next 24 hours.

In the wee hours of the night, the long-awaited nuclear deal between Iran and other global powers was finally hammered out. Without getting into the potential geopolitical impact of the deal, the most salient development for traders is that the long-standing economic sanction preventing Iran from exporting oil will now be lifted. The price of oil, Canada’s most important export, initially edged lower in the wake of the announcement before rallying back to 52.50 (WTI) as of writing, showing that the market had already priced in the short-term impact of the deal.

More significantly, USDCAD was also impacted by the June US Retail Sales report, which came out far worse than expected. Against expectations of 0.2% gain, retail sales actually contracted 0.3% m/m, with core retail sales also missing expectations at -0.1% vs. 0.7% m/m anticipated. This represented the worst retail sales reading in four months and the reading was below the estimates of all 81 economists surveyed by Reuters. Heading into Fed Chair Janet Yellen’s semiannual Humphrey-Hawkins testimony to US Congress, the retail sales report will put a sour taste in the mouths of bulls who are still holding out hope that the Federal Reserve will raise interest rates in September.

Not surprisingly, USDCAD pulled back from its 6-year high near 1.2800 in the wake of the disappointing report. Looking to the 4hr chart, the pair has been in a general uptrend over the last month, and there is still scope for short-term weakness toward bullish trend line support 1.2650 before the trend is invalidated. Meanwhile, the secondary indicators are mixed: the MACD is still tentatively holding above the “0” level, signaling lingering bullish momentum, though the 4-hour RSI is now showing a triple bearish divergence (where price has put in three higher highs, but the indicator has put in three lower highs) thus far this month.

Of course, the proverbial elephant in the room is tomorrow’s Bank of Canada monetary policy meeting. Analysts are split over whether the central bank will cut interest rates this month, but regardless of the decision, BOC Governor Poloz will likely strike a dovish tone as the economy struggles to recover from a weather-induced slowdown in Q1. For our part, we feel the central bank is more likely to leave interest rates unchanged tomorrow, but that another rate cut (from 0.75% down to 0.5%) is likely at some point this year.

If the BOC takes the proactive path and opts for a rate cut, USDCAD could quickly regain its mojo and break out to a new 6-year high above 1.2835, and in time, bulls could look to target the 11-year high near 1.3000. On the other hand, a decision to leave interest rates unchanged may serve as a temporary setback for USDCAD bulls, but the medium-term uptrend in USDCAD remains healthy. Any dips toward bullish trend line support or previous-resistance-turned-support at 1.2560 may present an opportunity to join that uptrend at value. 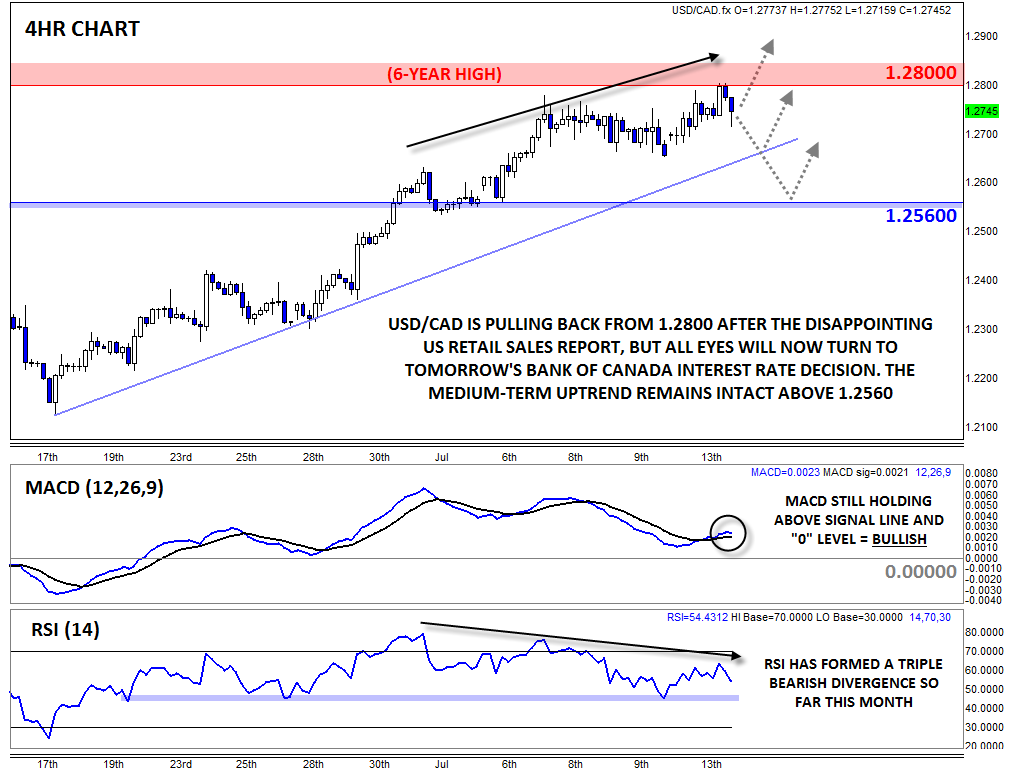