Our featured chart for today’s stock market article is for our Asia-focused traders: the Australian S&P/ASX 200 Index. We are looking at this particular index for both the technical and fundamental reasons as we think it might be on the verge of a big breakout, or at least set for a sharp move in one particular direction in the coming days.

The global stock markets have turned higher across the board this week as investor worries over Greece and China recede. These nations will be in focus again on Wednesday as China produces its second quarter GDP estimate and industrial production data for the month of June, while in Greece, Prime Minister Alexis Tsipras must convince members of his government to back a controversial third bailout offered by euro zone leaders just a few days ago.

If the Chinese data disappoints expectations then the Shanghai Composite could fall sharply, dragging the rest of Asia, including the S&P/ASX 200, lower with it. In contrast, if the numbers are better than expected then this could further fuel the kick-back rally we have seen in the past few days. And needless to say, if Greece votes against the bailout conditions then things could get really messy as Greece’s banks could collapse and the country may be forced to leave the euro zone. But this scenario appears unlikely; hence, the European markets have been relatively calm on Tuesday.

Meanwhile the oil price slump has also ended – at least for the time being, anyway – despite Iran’s nuclear agreement with the P5 1 group of world powers today, which should see more crude flooding the market. The slightly firmer oil prices could be good news for energy firms that make up the S&P/ASX 200 Index.

Meanwhile, the technical outlook is beginning to look somewhat constructive for the Austrian index, not least because the long-term bullish trend line around 5375/80 has been defended successfully twice now in as many weeks. What’s more, the RSI has formed a bullish divergence with the S&P/ASX 200 after it created a higher low when the underlying stock index made its most recent lower low last week. This correctly suggested that the selling pressure was waning. The bulls will also like the fact that the index has generally held its own above the 61.8% Fibonacci retracement level of the upswing from October.

Now, the S&P/ASX 200 has arrived at another key technical juncture, namely 5600/20. As highlighted in red on the chart, here the 50 and 200 day moving averages converge with previous support, a bearish trend line and the 38.2% Fibonacci level of the most recent downswing. Thus, a decisive break above here could see the exiting bears bail out on their positions and encourage the buyers who have been on the side-lines to emerge. In this scenario, the index could easily reach the prior high around 5700 before potentially embarking on a rally towards the 61.8% Fibonacci retracement level of the most recent downswing around 5770/5. Alternatively, if the abovementioned resistance area is defended then the index may pull back towards 5500 before deciding on its next move. 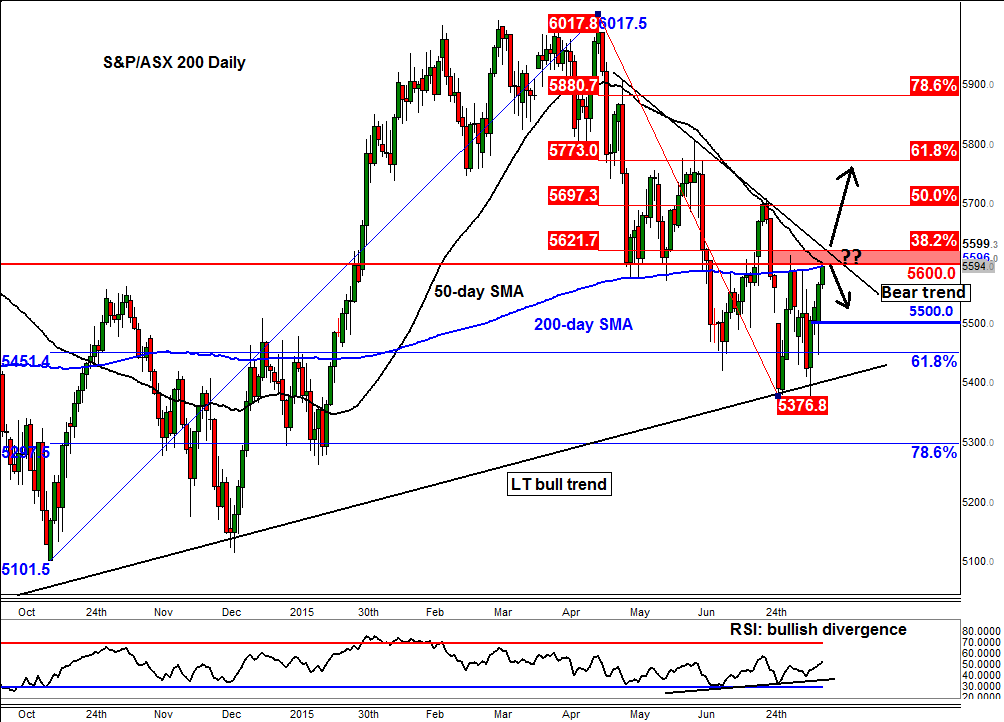