As my colleague Kathleen Brooks noted earlier today, tomorrow is a “D-Day” of sorts for global traders, with major economic events taking place in China, Greece, and the US (not to mention the BOC meeting in Canada). In terms of chronology (and potentially, market impact as well), China’s quarterly data dump is on the top of traders’ minds.

The world’s second-largest economy will release data its Q2 GDP growth, Industrial Production, Fixed Asset Investment, and Retail Sales at 10:00 ET tonight (2:00 GMT tomorrow), with traders keenly focused on the GDP release in particular. Readers will note that Chinese GDP has declined steadily over the last few years, ratcheting down from 7.8% year-over-year growth in October 2013 down to an expected 6.9% reading this quarter, which would represent the lowest reading since the depths of the Great Financial Crisis in Q1 2009.

The government has laid out an explicit growth target of 7.0% over the course of the entire year, and any quarterly readings below that level could shake the market’s confidence in the ability of China’s ruling party to manufacture consistent growth, especially in the wake of four separate interest rate cuts since November. Beyond the marquee GDP report, traders will closely watch the other releases to see if they confirm signs of a gradual slowdown or show any hints of a stronger-than-expected economy.

China is Australia’s most important trading partner, so it makes sense to focus on the Australian dollar in the wake of tonight’s high-impact releases. Since peaking above .8100 in mid-May, AUDUSD has shed nearly 800 pips peak-to-trough, representing a nearly 10% drop in the value of the commodity currency. Bears were finally able to put a tourniquet on the bleeding wound last week, and rates have since consolidated above support near the 127.2% Fibonacci extension of the April-May rally at .7390.

As it currently stands, there is no strong reason to suspect the recent pause is anything other than an oversold pause within the context of a still-healthy downtrend. In that vein, the MACD continues to trend lower below both its signal line and the “0” level, and the RSI has bounced out of oversold territory. According to this line of thought, uniformly weak data from China could jolt the bears back to life, with a potential break below the .7390 level opening the door for another leg down toward the 161.8% Fibonacci retracement around .7200. Only a break back above key previous-support-turned-resistance at .7550 on strong Chinese data would call the near-term bearish bias into question. 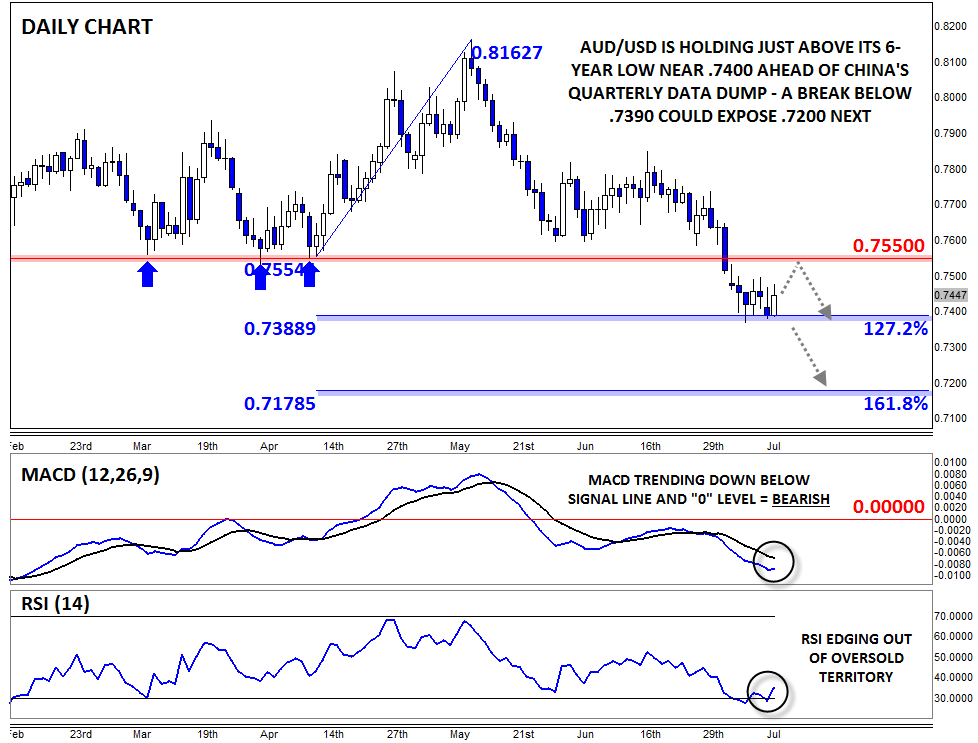