The price of gold has fallen sharply once again today. Undoubtedly, the latest catalyst for the slide has been Janet Yellen’s hawkish comments which have helped to underpin the dollar and undermine some buck-denominated commodities. In a prepared statement before testifying to Congress, the Federal Reserve chief sounded optimistic about the US economy, describing the outlook as "favourable." She also reiterated her view that the Fed is likely to hike rates later this year if the economy evolves as expected. On top of Yellen’s comments, all of today’s US economic data also surprised to the upside which further increases the odds for a 2015 rate increase. The producer price index for example climbed by 0.4% month-over-month in June against a 0.2% increase expected.

Things could go from bad to worse for gold if the Greek parliament votes in favour of the bailout plan demanded by its international creditors. If seen, this would sharply reduce the risks of a Grexit, potentially encouraging investors to pile back into riskier assets such as equities and away from safe havens like gold and the yen. Needless to say, if the Greek parliament rejects the plan, risk aversion could rise dramatically.

Technical selling could be another factor that could weigh on the price of gold over the coming days and weeks. It looks like the bulls have lost control of the key $1150 support. This area marks the convergence of a bullish trend line with a couple of Fibonacci levels, namely the 61.8% retracement of the entire 2008-11 rally and the 127.2% extension of its June range.  Thus, a decisive break below here could pave the way for a move to the 161.8% Fibonacci extension level of the aforementioned price swing at $1136. Thereafter, the next key level is at $1131/2 which corresponds with the November 2014 low. And if $1131/2 fails to offer support then things could turn really ugly for the precious metal.

As things stand therefore, it is more likely that we will see a continuation of the downward trend than a potential rally for gold. Even if we do see a bounce back, we will remain bearish on the metal in the short-term for as long as price holds below resistance at $1165 – a closing break above this level could potentially pave the way for the bearish trend line and the 50-day moving average around $1180/5. 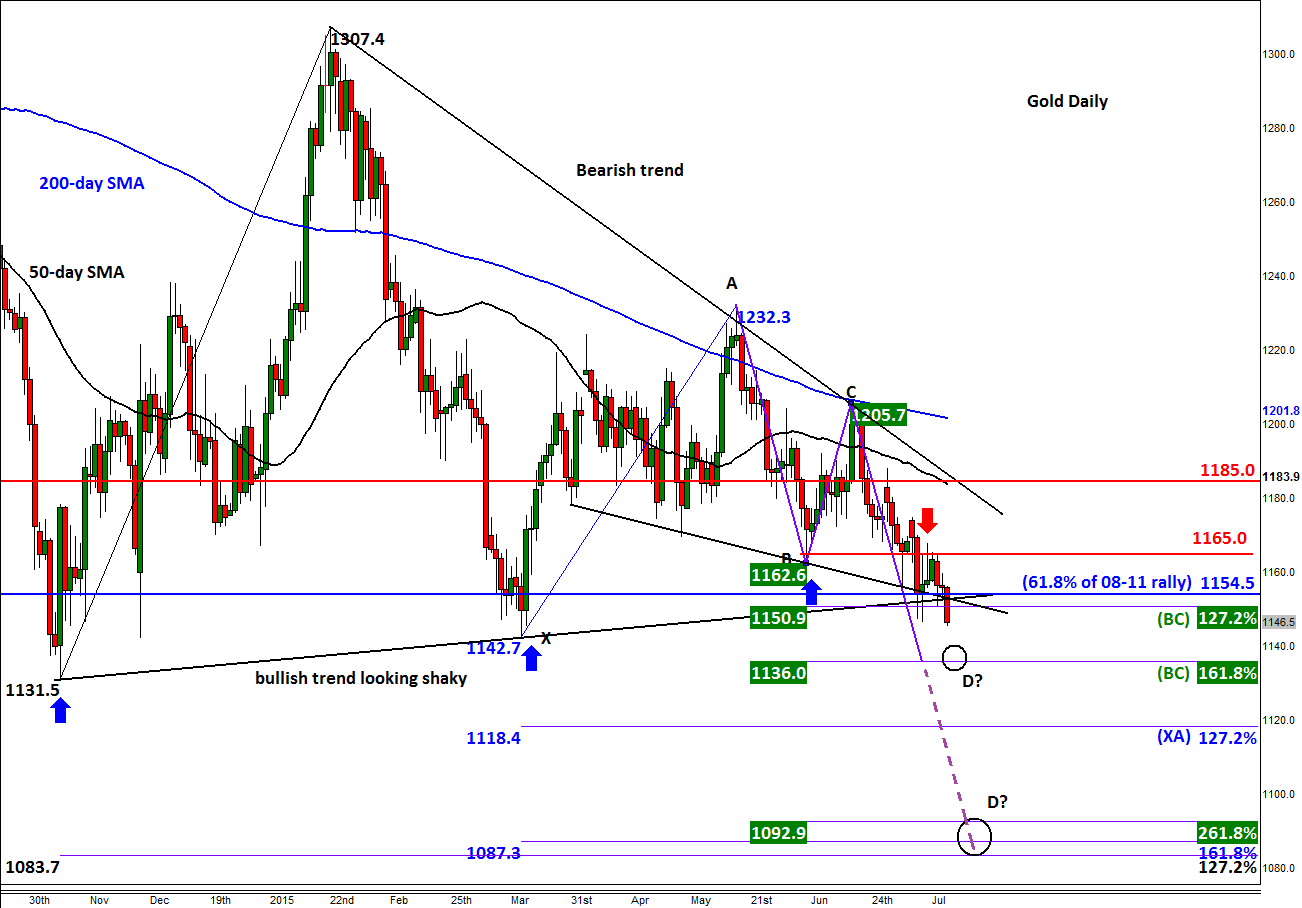