In a week full of big market-moving developments, it’s hard to blame traders who were burnt out heading into today’s typically high-impact US Consumer Price Index (CPI) report. In terms of US monetary policy and interest rate expectations though, it may actually be the most important release of the week, especially after Fed Chair Janet Yellen professed her view that “inflation will move gradually back toward our two percent objective over the medium term” earlier this week.

As it turns out the report came out generally as expected, with overall consumer prices rising by 0.3% m/m in June and Core CPI (excluding volatile food and energy prices) ticking up by 0.2% m/m; both readings were in-line with expectations. While this report was by no means shocking, it shows that inflationary pressures in the US economy remain consistent. With the annual rate of Core CPI inflation rising to 1.8%, backed up by simultaneous releases of better-than-expected Building Permit and Housing Start data, the case for a September rate hike from the Federal Reserve remains alive.

Dollar bulls took the generally solid reports in stride, pushing EURUSD down by about 15 pips and USDJPY up by the same amount. Taking a broader look, the dollar index extended this week’s gains to trade around 97.80 as of writing. This level represents a nearly 3-month high for the trade-weighted index of the greenback’s value against six major rivals.

From a technical perspective, a weekly close at this level would be a very constructive sign for dollar bulls. The MACD bolsters this view, with the indicator trending higher above the signal line and the “0” level. As long as rates hold above roughly 97.50, the near-term bias on the dollar will remain to the topside, with potential for a move up to about 98.75, which represents the 78.6% Fibonacci retracement (not shown) of the April-May selloff. Meanwhile, if traders start to question the likelihood of a Fed rate hike later this year, the index could move back down toward 97.00 or 96.00 in the days to come. 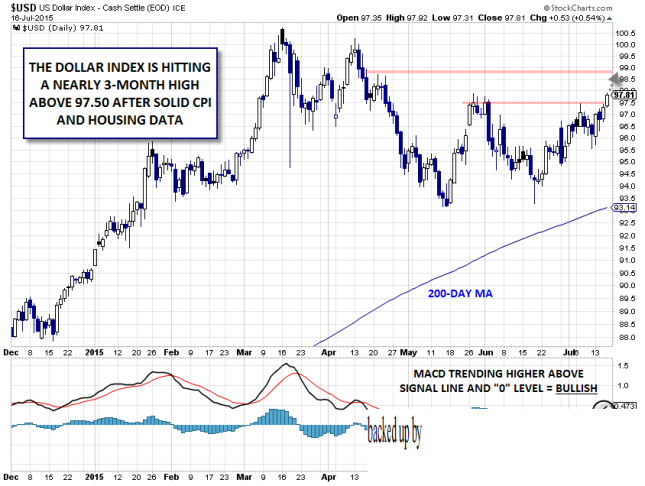