The RBA watches from the sidelines, keeps a close eye on AUD

The Reserve Bank of Australia (RBA) released it minutes from its policy meeting earlier this month which showed that the bank remains in wait-and-see mode. At its policy meeting at the beginning of July the bank left the official cash rate at 2.00% for the second month in a row, after two 25 basis point cuts earlier in the year, one in February and another in May. Prior policy loosening was in response to lacklustre business investment and a soft outlook for the labour market, and while not much has changed yet the bank doesn’t want to waste ammunition.

The RBA noted that recent volatility in Chinese equity markets and the threat of a Grexit required close monitoring, but there’s no sense that the bank has its finger on the trigger anymore. The minutes don’t convey the same degree of urgency from broad members that was present earlier in the year, thus we think the bank will remain in wait-and-see mode for the time being. A deterioration of the outlook/s for inflation and/or growth, a significant rise in the Australian dollar or increased turmoil in global financial markets could push the RBA to loosen monetary policy further, but this isn’t our base case. The unemployment rate hasn’t fallen off a cliff, although this is more due to slowing population growth than domestic economic conditions, and headline GDP growth is better than its commodity-based peers, like Canada and NZ.

Nonetheless, some important economic data out of Australia this week may help to clear the outlook for interest rates, with Q2’s inflation numbers due out on Wednesday (1130AEST). The market is expecting headline CPI growth to increase 0.8% q/q and 1.7% y/y, beating Q1’s numbers. However, core inflation is expected to have slowed last quarter to around 2.1% y/y from 2.3% y/y, just within the RBA’s 2-3% target range. If the pace of inflation slows any further it would likely force the RBA into a more dovish stance, while a pick-up in consumer prices may drown out calls for looser monetary policy in the near-term – the market puts the prospect of at least one more 25bps cut this year at around 60%.

The RBA still believes the Australian dollar should fall further against a long-term deterioration in key commodity prices, partly because it doesn’t want to risk triggering a rally in it by changing its stance on the commodity currency. This is broadly in line with most expectations from the market, but we are concerned about the possibility for a rally if the RBA completely removes its easing bias. Nonetheless, the combination of long-term USD strength and medium-term AUD weakness should keep AUDUSD depressed.

In the short-term, all eyes are on Wednesday’s inflation numbers amidst the emergence of some technical indications that price may have found a bottom around 0.7350. There’s bullish divergence between price and RSI on a 4-hr chart; above 0.7450 we’re eyeing 0.7500 and then 0.7545. 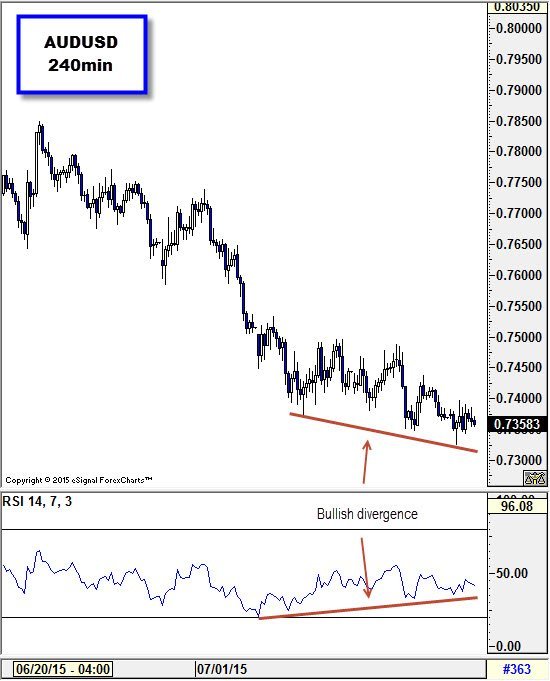