The NZ dollar was propelled higher immediately after the RBNZ’s decision to cut interest rates as the bank wasn’t dovish enough for the market, despite the fact that 25bps was taken off the official cash rate for the second month in a row and the bank noted that further policy easing seemed likely. It appears the market was ultra-dovish in the lead up to this meeting, with some participants expecting the bank to lob 50bps off the OCR. Also, the bank omitted a line from Governor Wheeler’s statement about the level of the NZ dollar being unjustified and unsustainable which the market took as a sign the bank is softening its stance on the exchange rate; the RBNZ has been the kiwi’s biggest adversely in recent times, largely because a stronger exchange rate alongside falling commodity prices is a big threat to the NZ economy.

The rally in the kiwi wasn’t strong enough to break any important resistance zones for NZDUSD, with the pair remaining in an overall downward trend. This is understandable given the clear fundamental risks facing NZDUSD as the RBNZ looks to cut interest rates even further, possibly to 2.5% later this year, and the FOMC prepares to hike rates as soon as September. With the market returning its focus to yield differentials in the wake of the recent threat of a Grexit, a currency pairing underpinned by a clear divergence of monetary policies is going to be tasty option for bears, especially considering the RBNZ still believes further depreciation of the kiwi is necessary given soft export commodity prices.

NZDUSD remains in a medium-term bearish trend and is still looking like an attractive pair to short on rallies. From here, we’re eyeing off support around 0.6500, a break of which may see price make a run for the bottom of the aforementioned trading channel. A break of the top of its downward channel would negate this bearish scenario and our attention would turn to resistance around 0.6780. 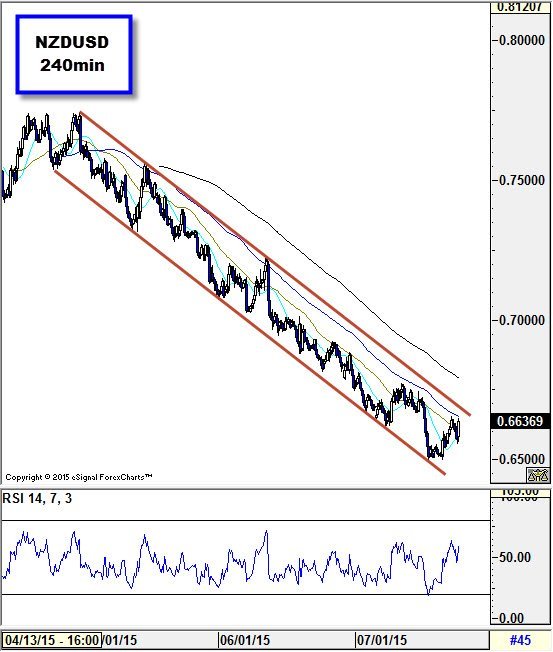