RMB is under pressure ahead of the Fed’s policy meeting

There’s some downward pressure building on the yuan ahead of this week’s meeting at the FOMC. USDCNY is hovering somewhat close to the ceiling set by the PBOC’s placement of the reference rate (see figure 1) and the spread between offshore and onshore yuan (see figure 2) is nearing levels last seen when the CNY was consistently testing the top of its trading range late in 2015/early 2015. This suggests that downward pressure on the Renminbi is building as investors prepare for the possibility of a more hawkish tone from the Fed this week.

Figure 1: USDCNY is consistently near the top of its trading band 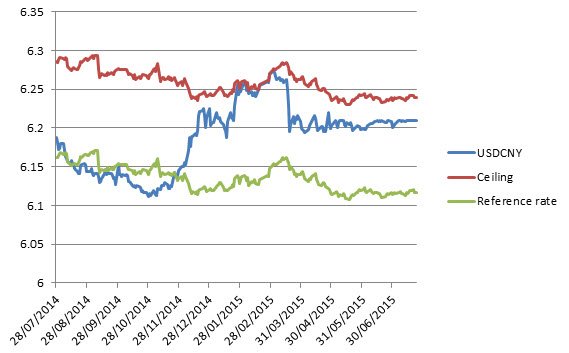 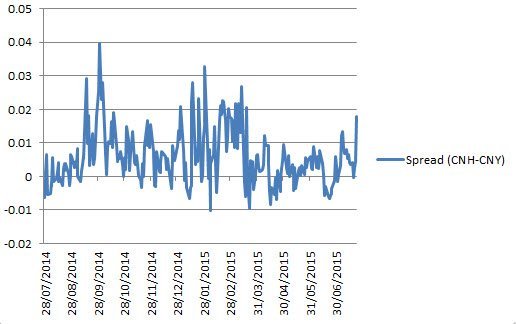 The downward pressure on USDCNY is understandable given a divergence of monetary policy expectations between China and the US. The former is expected to keep loosening policy as growth settles below 7% later this year and the latter is looking to raise short-term rates as the economy improves. It’s therefore not surprising that we’re seeing upward pressure build in offshore yuan, increasing the CNH-CNY spread (USDCNY gets progressively more and more illiquid near the edges of its trading range, thus it doesn’t have the same freedom to move higher even within its trading band).

There is some pressure from within Beijing to allow the yuan to depreciate by liberalising it further, as this would likely lend exporters a helping hand and help the RMB be added to the IMF’s basket of reserve currencies. However, it’s unlikely the PBOC will risk freeing CNY while it’s so freely playing with monetary policy in response to soft domestic demand and extreme volatility in the stock market.

Eyes on the FOMC

There’s a chance the market has underestimated the likelihood that the Fed will raise interest rates at its September meeting, and the bank may use this week’s meeting (a policy statement is due at 1800GMT on Wednesday) to prepare the market for such an event. During a recent speech Feb Chair Yellen seemed to be a little more hawkish than the market; a view supported by a general improvement in the economic outlook for the US. The economy is adding jobs at a healthy rate and core inflation is gaining pace (CPI excluding food and energy rose 1.8% y/y in June). Overall, we think the time is right for the Fed to prepare the market for the increased possibility of tighter monetary policy as soon as September, which could spark another significant rally in the US dollar.

Although, traders will also be close eyeing US advance GDP figures for Q2. The US economy is expected to have rebounded in Q2 after faltering in the first three months of the year. Annualised GDP is expected to jump to 2.5% q/q, with consumer spending anticipated to have increased 2.7%. The pace of growth of the US economy is a major factor in the setting of monetary policy, thus it’s very closely watched by policy makers and investors.