NZDUSD is bolstered by comments from the RBNZ

The NZ dollar was bolstered by an unlikely source, the Reserve Bank of New Zealand (RBNZ). Governor Wheeler noted during a speech earlier today that whilst further interest rate cuts are likely, the economy doesn’t require severe monetary policy loosening. This helped spark a rally in the kiwi, with NZDUSD jumping through 0.6700 on the back of the comments.

The market still expects the RBNZ to lob another 25bps off the official cash rate in September, but expectations for a follow-up cut in October and more policy loosening beyond that have been scaled back. Nonetheless, we still think the back will cut in both September and October, bringing the cash rate back to a record low 2.5%; there are some in the market that believe the bank will cut the OCR to as low 2% during its current easing cycle.

What to expect from the Fed?

The entire market is waiting with bated breath for tonight’s monetary policy meeting in the US. While it’s extremely unlikely that the FOMC will move interest rates this time around, it may reinforce the idea of a rate hike in September.

As we stated last week, there’s a chance the market has underestimated the likelihood that the Fed will raise interest rates at its September meeting. During a recent speech Feb Chair Yellen seemed to be a little more hawkish than the market; a view supported by a general improvement in the economic outlook for the US. The economy is adding jobs at a healthy rate and core inflation is gaining pace (CPI excluding food and energy rose 1.8% y/y in June). Overall, the time may be right for the Fed to prepare the market for the increased possibility of tighter monetary policy as soon as September, which could be bullish for the US dollar. In the event the Fed pushes back the market’s expectations for policy tightening, the USD could suffer.

From a technical perspective, NZDUSD is looking a little stronger after breaking through the top of downward trending channel, which was support by a bullish divergence between price and RSI on a daily chart. While our long-term bias remains lower for NZDUSD, these new developments create the potential for some near-term strength. 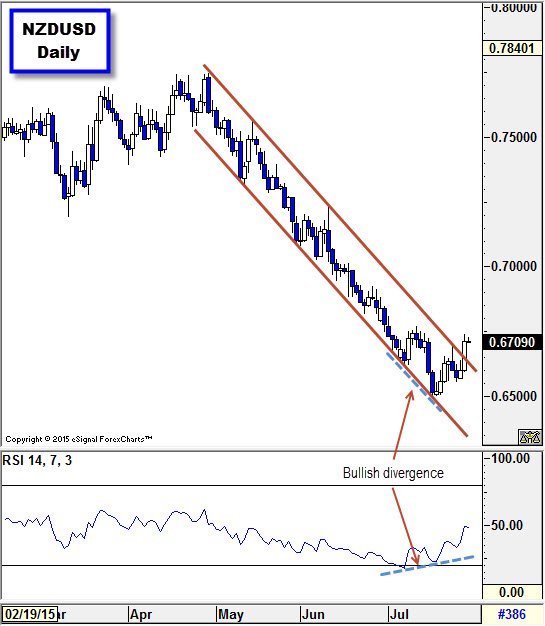