NZDJPY’s hit from both sides

NZDJPY peaked just above 94.00 at the end of 2014, before plummeting in January and again in June. The totality of the sell-off was almost 1,400 at its lowest point, despite gains in USDJPY. It was a widespread and a brutal sell-off in the kiwi that derailed the pair, with the commodity currency coming under assault from weaker commodity prices, soft risk appetite and a deteriorating outlook for interest rates.

Bears don’t appear to have finished feasting on the kiwi just yet, as evidenced by a very soft business confidence index for NZ today, and now the yen is starting to look a little more comfortable pushing higher than it has in the past. Policy setters in Japan appear to becoming more uncomfortable with the negative impacts of excessive policy loosening and yen weakness and Japanese economic data may be turning a corner.

Industrial production in Japan jumped an impressive 0.8% m/m in June and inflation is not as bad as once feared, with core CPI rising 0.1% y/y last month (expected 0.0%). It’s still very early days in Japan and we aren’t ruling out the prospect of further stimulus from the BoJ, but there’s at least a glimpse of light on the horizon for the economy, however dim. This was reflected by a jump in the yen on the back of today’s inflation figures, with USDJPY briefly shooting below 124.00

In New Zealand, ANZ’s Business Confidence Index dropped to -15.3 this month, representing an astounding deterioration of corporate sentiment. This is the lowest the index has been in over six years and the first time it has been in contraction territory twice in a row since the GFC. Unsurprisingly, the kiwi didn’t react very well to this news, with NZDUSD dropping through 0.6600 before finding some support around 0.6570.

NZDJPY’s recent push upwards looks more like a consolidation than the beginning of a more substantial push higher. At present, the pair is testing the bottom of this channel, a break of which could see the pair make another run at support around 80.50. On the up side, we’re keeping an eye on the top of its wedge formation and then a key sticky zone for price around 85.00. 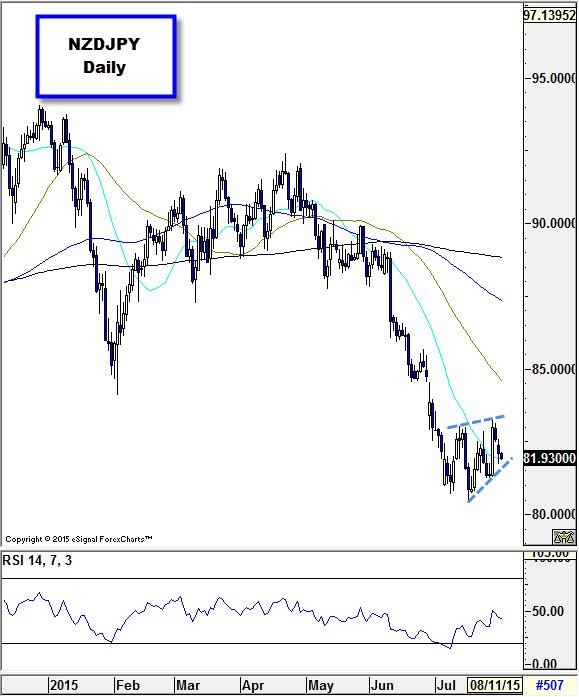