The Reserve Bank of Australia (RBA) is widely expected to leave the official cash rate at 2.00% at its policy meeting on Tuesday. There has been no indication over the last month that the RBA will deviate from its implicit dovish stance at this meeting. Economic data and events haven’t been shocking enough to wake the RBA from its slumber, despite a tightening of credit conditions in the housing market. Higher interest rates in the residential property market increases the likelihood of further policy easing from the RBA to offset these effects, but it doesn’t reach deep enough into the real economy to force a cut this time around.

The biggest piece of domestic economic data over the last month was Q2’s inflation report, which showed an increase in headline consumer price growth to 1.5% y/y, from 1.3% and a drop in core inflation to 2.2%-2.4% y/y, from 2.3-2.5% in Q1. Slowing core-prices may increase the RBA’s imputes to loosen monetary policy, but we’re not at crisis levels yet. The RBA’s already loose policy stance likely means that it can afford to remain on the sidelines for the time being as stimulus finds its way into the real economy, although a further deterioration in core-price growth would bring it dangerously close to the bottom of the RBA’s target range of 2-3%.

Another key point of concern for the RBA is the volatility in China’s stock markets, as it poses a clear threat to Australia’s export market and, in turn, GDP. The massive sell-off in China A shares has weakened business sentiment in the heart of China’s economy, likely crippled consumer sentiment and proven that Beijing cannot control its stock market. Despite the PBoC’s massive firepower, it apparently cannot prevent the market from finding its own floor and the more it intervenes the more damage it may do as investors weigh the risk of trading in a manipulated market.

Set against this negative news about inflation and a softer outlook for trade exposed sector of the economy is a broad pickup in business confidence and the outlook for non-resource parts of the economy. NAB’s Business Confidence Index for June jumped to 10 from a revised 8, suggesting that businesses are becoming more optimistic about the outlook for the economy, which may be an indication that business investment is increasing. This has been a very sore point for the RBA in the past and provides a glimmer of hope for the board at this week’s policy meeting, especially given recent softness in the exchange rate, with AUDUSD comfortably below 0.7500.

It’ll be interesting to see if the recent depreciation of AUDUSD will be enough to soften the RBA’s stance on the exchange rate. The bank won’t want to risk stoking a rally in the exchange rate, but Stevens didn’t talk down the aussie during a speech on July 22nd. The bank’s minutes from its last policy meeting included a line about a further depreciation in AUD being likely and necessary, yet it may have deprecated enough for the bank to soften its stance on the exchange rate. If it does and leave rates on hold, AUDUSD may rally in the short-term, especially given that some in the market are expecting the RBA to cut the OCR. Although, traders may seek further clarification from important US jobs numbers and the RBA’s latest quarterly MPS, both due at the end of the week.

From a technical perspective, there are some indications that AUDUSD may have found a short-term floor around 0.7235. There’s some bullish divergence between price and RSI on a daily chart and MACD is also indicating that bulls may be preparing for a charge. In the event that price does push higher, 0.7500 will be the zone to watch as it represents important psychological and horizontal support for AUDUSD. 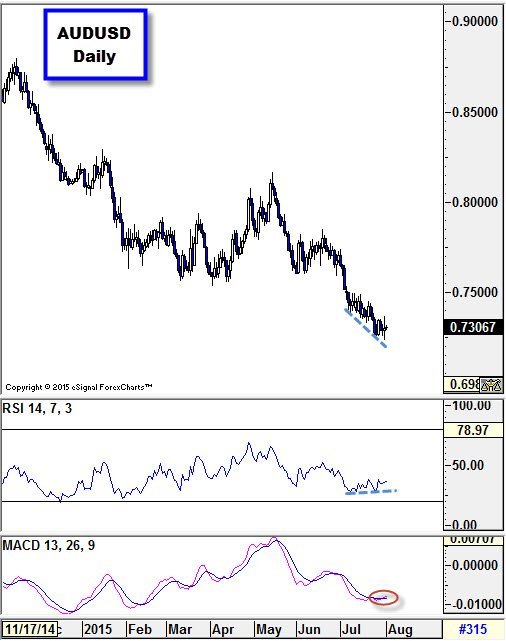